So the Opening up Archives programme is in its eighth month – we’ve passed the halfway mark and over half of us trainees have blogged here in our very own Trainee Tuesday slot. We’ve had posts on digital preservation, augmented reality, and we’ve learnt about projects and collections within our hosts’ archives, in Leicester Records Office and in London Metropolitan Archives. Oh, and we also learnt that one of our fellow trainees likes to masquerade as a frustrated 18th century spinster online. Well, to each their own.

A lot of collections we’ve seen so far are rooted in the 20th century onwards, but my traineeship goes back a little further than that. I and my fellow trainee, Amy, are based at the Borthwick Institute for Archives undergoing a traineeship that could easily be titled ‘learning to read really old things’. In fact that’s how I describe it to people who ask. Ours is the only traineeship which focuses mainly on these more ‘traditional’ skills: palaeography (the writing), diplomatic (the format), and Latin (the dead language).

And it makes sense really, when you think of the Borthwick’s holdings: an enormous collection of ecclesiastical records including parish registers, visitations, church court records, vast collections of diocesan records and probate records. Many of the documents we are interested in date back to medieval times. Don’t get me wrong, we do have records which date from – gasp – this century; we have a digital archivist and we even have a twitter account! However, in order for us to get anywhere in our traineeship we definitely need the skills we are learning.

In order for us to learn these skills we have to practice, and we’ve found that the best documents to practice with are Cause Papers and wills. The Cause Papers in particular feature a variety of English and Latin, follow a set format and often they can feature narratives which could rival a soap opera’s. 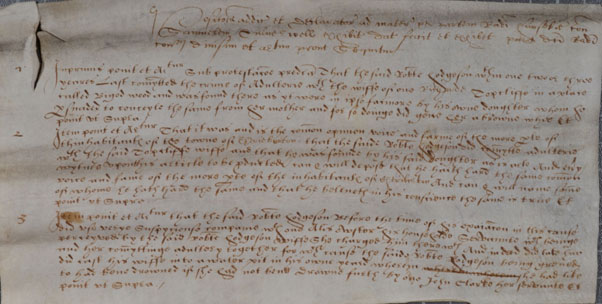 Once you get through the odd (odd to us, anyway) phrasing and spelling you get to the details: Robert Hodgeson was having an affair with Richard Topcliffe’s wife. His daughter sees this so he bribes her with a brown ‘whie’ – a cow – to keep quiet. His wife finds out anyway and in his anger, Hodgeson throws her into a ditch. I really do enjoy reading these documents for the glimpses you get into life at that time. 1

One of the bigger projects we are working on involves teaching a course to adult learners on documents and death, so wills will be featuring. The Borthwick Institute holds a large collection of wills (dating up to 1858), second only in size to the National Archives. Wills can offer us a glimpse of an individual; they vary in style but, especially in 16th to 18th century wills you tend to get a picture of the person writing or dictating their will. Look at this one: 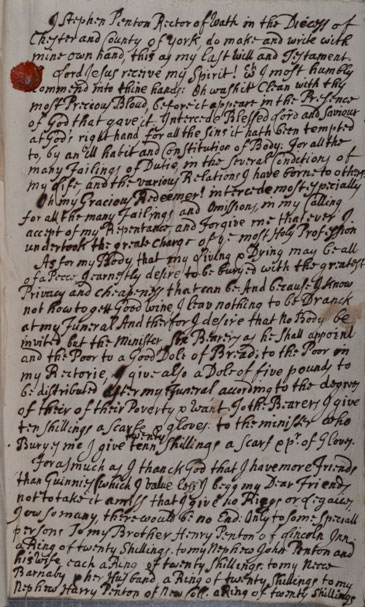 Hopefully this is fairly easy to read without a lengthy transcription, but to start you off it reads: ‘I Stephen Penton of Wath in the Diocess of Chester and the County of York, do make and write with mine own hand, this as my last will and Testament.’ It then goes on in great detail on the subject of his soul and his repentance of his sins. Whereas at this time many wills would simply have ‘In the name of God Amen’ at the beginning, for this man this is much more than just a necessary religious preamble. This is a man devoted to God whose actions and wishes are determined through that devotion. I think it’s a great example of the individuality that can be seen in wills – it’s certainly why they are so interesting to me.

There are so many fascinating wills at the Borthwick, and indeed at The National Archives, and hopefully in coming posts I can show you more!