When thinking of war posters, the slogans ‘Keep Calm and Carry On’ or ‘Make-do and Mend‘ might spring to mind, or perhaps the darker ‘Daddy, what did YOU do in the Great War?’ During the First and Second World Wars, posters were a vital method of communication; the government used them to increase morale, reduce panic and boost both agricultural and industrial output.

You could argue that they’re now embedded in the culture of the country. It’s highly likely every one of us will recognise Lord Kitchener’s ‘I Want You’ designed by Alfred Leete, in 1914. We have a collection of over 150 posters at Manchester Archives.

'Which is it be, Bonds or Bondage?' poster

Take this poster from the collection ‘Which is it to be; Bonds or Bondage?’ issued by the War Savings Office in Salford (date not known), which is unique to the area. 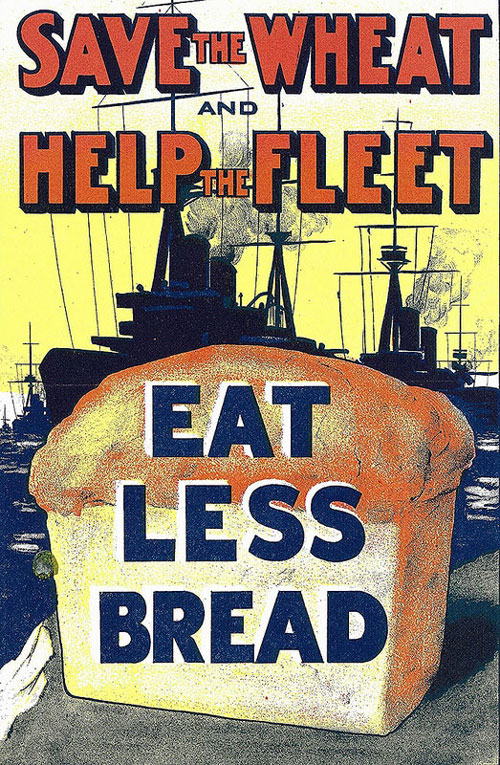 The widely produced ‘Save the Wheat and Help the Fleet’, issued by the Ministry of Food in 1917 forms part of a wider campaign encouraging members of the public to be more economical with food, and like many other posters of the time, attempts to create a link between individual choices and the wider war effort.

Some of the most unique posters within the collection were created by Bert Thomas, a political cartoonist that contributed to Punch Magazine, and who during the First World War produced the famous poster, ‘Arf a mo Kaiser’.

You can view more of our collection, in the Manchester at War Flickr set. The National Archives also has a digitised collection of war posters on Wikimedia Commons, including the famous ‘Dig for Victory‘.