‘Wisdom is the principal thing; therefore get wisdom, and with all thy getting get understanding’

This inscription from the Book of Proverbs can be found in the Great Hall of Manchester Central Library. I’m an Opening up Archives trainee, based in Manchester Archives, which is a part of Manchester Libraries. Today, many archival institutions have a social media presence; they tweet, blog, have a Facebook page and a Flickr Photostream, but to what extent do they help us get wisdom? I’d like to concentrate on three different, emerging, and perhaps misunderstood, online-based channels which offer the potential to produce an engaging, interesting and accessible online narrative.

Augmented Reality (AR), as I understand it, involves the combination of a real world view with a virtual scene generated by a computer, augmented with additional information which is viewed through a smart phone or tablet. I’ve written about AR previously on the Manchester Archives blog, in which I discussed what AR could add to this pictorial poster (below) produced for the Manchester Corporation Transport Department by E. Wigglesworth in the early 1930s. The potential and possibilities for contextualising an item or collection appears endless. 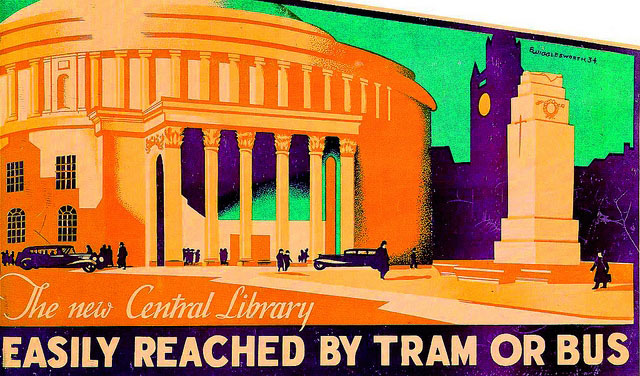 In 1994, the Denso-Wave Corporation invented the Quick Response (QR) code. They have had quite the resurgence over the last few years and seem to have, in some quarters, earned a bad reputation. Two ways of using QR codes are of particular interest to me. Firstly, the social aspect; when scanned they can direct the user to, say, a Pinterest pinboard or Delicious stack. Secondly, they can act as a vehicle driving the user to a website which holds more information on the collection they are viewing or the institution they are viewing it in.

Next up, it’s Storify, you get the gist from the title. It’s a website which creates and preserves stories, it draws content from across the internet; photographs from Flickr Photostreams, tweets, videos and more, and I particular like how this ties in with events. I created this Storify, Manchester Local Images – Local Data, to document our participation in Manchester’s centre for Young Rewired State 2012, which is a festival of code for young people aged below 18. I particularly liked how it captured the atmosphere of the event, and it is also very useful for seeing how information is disseminated through social media shown in this Storify, Open is Better: The Twitter Life of a Blog Post.

My traineeship is centred on online engagement. Setting a new path through reinterpretation, or finding new promising ways to present collections and information. There are many others examples that I could wax lyrical about, Pinterest and Historypin being two, but until next time, ‘Get Wisdom’!