When I started at London Metropolitan Archives I thought I had a pretty good idea of the sort of collections it held. A copy of Magna Carta, a decree of William the Conqueror and another 100km or so of shelving containing the minutiae of London’s governance and trade for the last 1,000 years or so.

Once I arrived here and started browsing the catalogue though, I was pleasantly surprised to see that we didn’t just have the documents of London’s officialdom in our strong rooms, but also the documents of the long procession of London radicals and community groups that have fought for change against the prevailing orthodoxy. From Chartism to Suffragettes to Peter Tatchell, if someone’s been angry with the establishment in the capital, we invariably have some record of it. 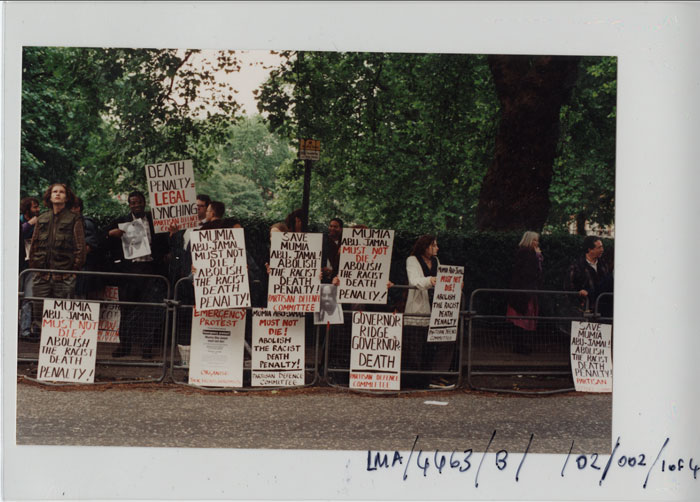 For many years now the department of Education has been committed to Learning outside the Classroom, something they say ‘builds bridges between theory and reality, schools and communities, young people and their futures … developing active citizens and stewards of the environment’. Archives are perfectly suited to provide these links and build this knowledge; their holdings are after all the raw material of history and they can give students a unique experience of the hidden narratives of the ordinary people who held their rulers to account and changed things for the better, the radicals who shouted from the side-lines for change.

The records deposited by Eric and Jessica Huntley, two fierce black political radicals from Guyana, and their publishing house the Bogle-L’Ouveture Press, form some of the most wide-ranging and fascinating collections we hold at LMA. The Huntleys came to Britain in the late 1950s, and since then they have committed themselves to trying to bring about positive change in their community and beyond, publishing radical black literature to educate and inform and taking a key role in a plethora of campaigns for racial and social justice on issues as wide as the miners’ strike, the New Cross Massacre and the setting up of supplementary schools.

One of the most interesting campaign series in the Huntley Collections are the records of the campaign to save Mumia Abu-Jamal from execution. Mumia Abu-Jamal was an award-winning black radio journalist and associate of the Black Panthers in Philadelphia, who for many years had been campaigning against injustice and police brutality in the city.

In December 1981, Jamal was riding in his brother’s car when they were pulled over by police officer Daniel Faulkner. Minutes later, Jamal had been shot in the chest and Faulkner lay dead. Jamal was accused and charged with Faulkner’s murder, convicted in June 1982 and sentenced to death. 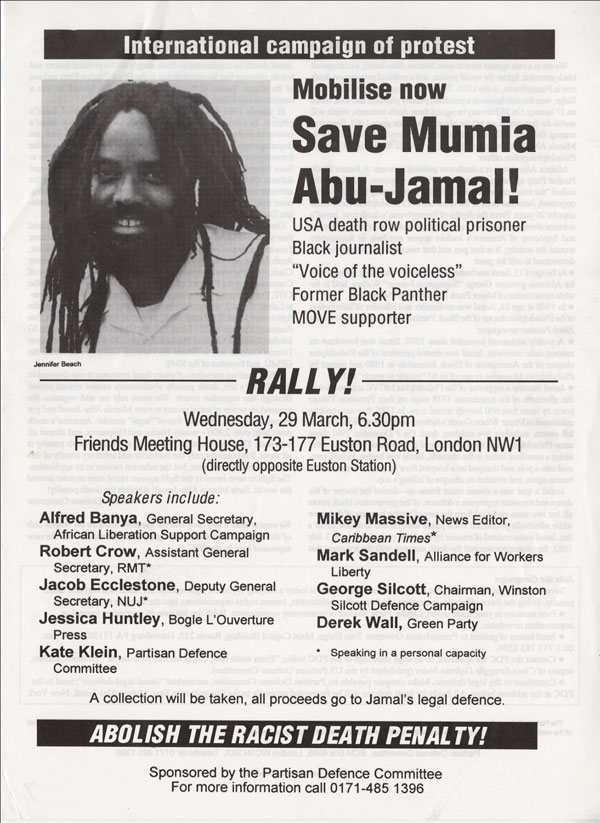 Many people at the time though that Jamal’s trial was unfair and that he had been persecuted due to the colour of his skin and his previous activism. Following his conviction and death sentence many groups began to voice their concern over Jamal’s fate, including Amnesty International, trade unions and the Huntleys.

Jessica Huntley had become friends with Jamal before his trial and wrote to him when he was first arrested, promising to raise awareness for his cause. Jamal’s reply was signed off with a self-portrait shouting ‘Dare to Struggle! Dare to Win!’, and this is what the Huntley’s did, organising letter writing campaigns, holding rallies and protests and distributing literature to keep the campaign and Jamal in the media in a hope to save his life. They were successful, Jamal’s execution being stayed in 2011 after 30 years of campaigning.

A colleague and I have recently been using this large and inspiring collection as a resource to teach wider citizenship skills as part of the ‘Campaign! Make an Impact’ scheme of learning developed by the British Library, for which the LMA is the London Hub.

Campaign! is all about using history to inspire active citizenship by teaching students about historical activism. Doing this in an archive environment is fantastic, as the students can really connect with the reality of the campaigners’ efforts, handling (in a supervised fashion of course!) the unique documents and ephemera which are the bread and butter of campaigns, seeing the reality of their work and understanding the process of organisation.

We identify why the campaign was started, the importance of setting objectives and what they were, ideas around allies and opponents, what resources are available to campaigners other than money and, most importantly how campaigners utilised important techniques like fundraising, publicity and lobbying. We look at event advertisements, pamphlets, letters from notables such as Tony Benn and other sources to discuss this.

This way of working not only allows students to develop skills in history – interrogating sources, examining causation – but has a broad cross-curricular scope, emphasising close reading skills important to English, but most importantly, focusing on why these historical campaigners got involved and became active citizens, and the continuing importance of this involvement in the community.

Through the workshop the students learn how the campaigners decided upon their objectives and how they planned for success, and that that success is often hard-fought and a long time coming. We get them to apply this knowledge to their own environment, deciding upon their own campaign ideas for issues affecting their school and local area. This leads to an extended exercise at their school where they apply this knowledge to bring their campaigns to genesis, with a follow-up visit from LMA staff to enforce that their work is not just a classroom exercise but something that could really make an impact.

The Jamal campaign is one shrouded in controversy and conflicting opinions, so we don’t try and give any answers, but invite investigation. The central message we try and give is that if students ‘Dare to Struggle! Dare to Win!’ and hold power to account, they can not only take an active participation in society, they can help to bring about a vision of a better tomorrow.