How to trace your criminal ancestors 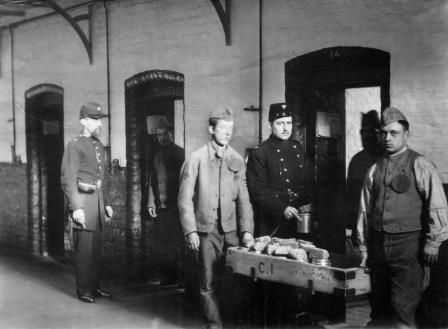 Criminals in the 19th century suffered great hardships at the hands of an almost inhuman state – and the experiences of those who entered the criminal justice system in this period are contained in multiple records still held by The National Archives.

The vast collections of criminal records are a rich source of detail for family historians and many others: they provide an insight not only into crime and punishment in the 1800s, but also into the daily lives of working people who are so often anonymous in the historical record.

Criminal records can be complex and are often interlinked. It can be difficult to know where to start with these records so here are some top tips for exploring criminal pasts.

Look at our research guidance

The criminals, courts and prisoners section of our guidance pages is a great place to start. It details what records we have, what they are and contain, and how you can get hold of them.

The National Archives doesn’t hold the records of all historical criminal trials and convictions. If someone was tried for a serious offence at the travelling assize courts, then we should have a record. A trial at local quarter sessions might generate some records at The National Archives, but the trial records will be held locally. And those tried at petty sessions are likely only to be recorded in the local record office.

To find the correct local archive, use our Find an Archive tool to locate it.

Don’t know when or where the trial took place?

This can be a common problem, whether following up a family legend about great-great auntie Maud, or chasing up an ancestor who appears on the census in a prison. There are two ways to start in these situations.

Take the case of Sarah Sanders for instance, who was convicted of larceny (theft) at the Exeter Quarter Sessions in April 1878. Sanders can be found in the HO 27 register of that year. A troubled woman of just 18, she was also convicted of ‘attempted suicide’ and sentenced to an additional day of imprisonment on top of the seven years she received for larceny. A search for ‘Sarah Sanders AND Exeter’ on the Newspaper Archive on Findmypast returns us a number of articles from local newspapers, which give us more details of the case.

If your ancestor was tried at assizes then you should be able to find records of their trial at The National Archives. The process of searching is explained in our guide on criminal trials in the English assize courts 1559-1971 – key to records.

Transcripts of trials do not survive. However, if someone was tried at the Central Criminal Court (known as the Old Bailey) then there may well be a transcript of their trial on the free to use website Old Bailey online.

The proceedings vary in their detail, but earlier cases often include verbatim transcripts of what was said by defendants. For instance the transcripts of the trial of Peter Ferril, sentenced to transportation for theft in 1794 provides us with a full transcript of his statement to the judge:

Prisoner Ferril: My lord I am a labouring man and unable to fee counsel, I therefore hope your lordship will be my advocate. When I work in town I generally lodge at Kezia Shepherd ‘s, one of the prisoners, who passes as my wife … I was taken into custody and was scarce allowed time to put my clothes on. And then before the justices next day the prisoners declared that I knew nothing of the matter, and the prosecutor said that she believed me to be an honest harmless man and had nothing to lay to my charge, but for what reason I cannot tell I was committed.

The transportation of offenders overseas began in 1717, with criminals being sent to Britain’s colonies in North America. The American Revolution at the end of the 18th century brought this to an end.

However in 1787, criminal transportees began being sent to New South Wales in Australia and Van Diemen’s Land (now known as Tasmania), a practice that continued until 1868 (although transportation between 1850 and 1868 was much reduced).

Transportees could expect a harrowing journey to the other side of world, with little in the way of on-board entertainment beyond laundry and religious instruction, and back-breaking labour once arrived. Convicts had little prospect of ever seeing Britain again.

There are a wide range of records for transportees available which can provide us with range of information. Many of these records are available on Ancestry (£); to find out more consult The National Archives’ guide on criminal transportees.

Take the case of Mary Lambert, who was sentenced to seven years transportation in 1839 for theft. Mary can be found on Ancestry in the record series HO 10. HO 10 can provide us with many details of a convict’s journey to, and life in the penal colonies. In Mary’s case we learn, among other things, that she was transported on the ship Gilbert Henderson, arriving in Tasmania in 1840.

Knowing the name of the ship can lead us to further records giving us an insight to Mary’s journey. The medical journal of the Gilbert Henderson’s surgeon (in the record series ADM 101) provides us with a rather unsettling account of the privations suffered by its passengers – extremely rough seas meant widespread sickness and constipation. This was coupled with the spectre of scurvy. 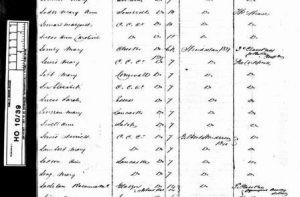 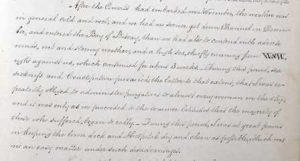 Extract from the journal of the surgeon of the convict ship Gilbert Henderson, 1840 (catalogue reference: ADM 101/29/7)

By the 1850s transportation was on the out, not least because of the residents of Australia’s distaste for their country acting as Britain’s principle prison. Instead incarceration in convict prisons where religious penitence for your crimes (hence the phrase penitentiary) and hard labour were the order of the day.

Just like transportees, criminals sent to government-run convict prisons could generate many different records. Many are available on Findmypast (£) and are explained in detail in our guide about prisoners or prison staff.

The main series among these records are the after-trial calendars of prisoners convicted at assizes and quarter session in the record series HO 140 (CRIM 9 for those tried at the Old Bailey) – arranged by county.

Many other records are available, including the record series HO 23, a register of national, convict prisoners held in cells at county gaols, which were rented by the government when prisons were overcrowded. 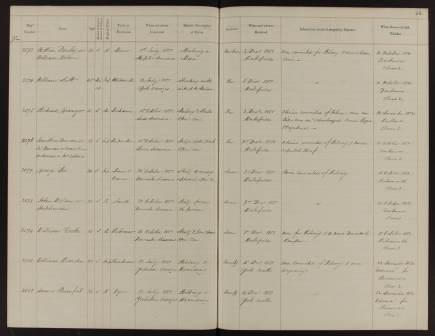 In HO 23 we can find a record of William Scott, convicted in 1851 of shooting with intent to murder. Scott’s was an odd crime: he walked into a female friend’s house, seemingly in some anguish, and proceeded to shoot her. She escaped and he shot himself. He was sentenced to ten years transportation, but never left England.

He turns up in HO 23 at the county gaol in Wakefield. This also records his eventual move to the national prison at Dartmoor, where there will be further records for him.

Records of respite and pardon

The records created when prisoners were released or pardoned of their crimes can be some of the most detailed and illuminating available to us.

There are two principle sets of records available – criminal petitions and licences. Again, both are detailed in the guide on prisoners or prison staff.

The largest collections of criminal petitions are in the record series HO 17 and HO 18, which run from 1819-1854. They often include letters from family, friends, and local notables, arguing on behalf of the convict. Many of the petitions are catalogued by name on Discovery and Findmypast.

Petitions can provide a lot of detail about a crime, and someone’s circumstances when they committed them. William Scott’s petition, for instance, has a letter from his local doctor alleging that he was in a heightened state of distress when he committed his crime, owing to longstanding indigestion.

The mid-19th century also saw the introduction of licenses, allowing prisoners to be released early. These records can provide us with a great amount of detail of a prisoner’s conduct in prison and their character, and sometimes that holy grail of genealogy – the photograph.

Sarah Sanders’ license, for instance, provides us with a photo of her, while her medical report allows us an understanding of the callous treatment that this clearly troubled young woman received at the hands of the barbarous Victorian prison system. 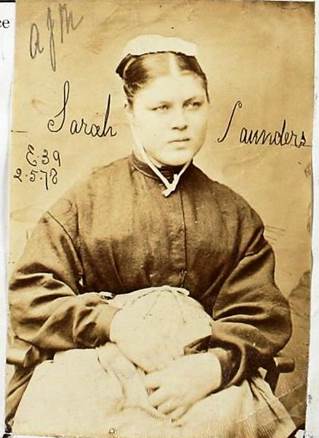 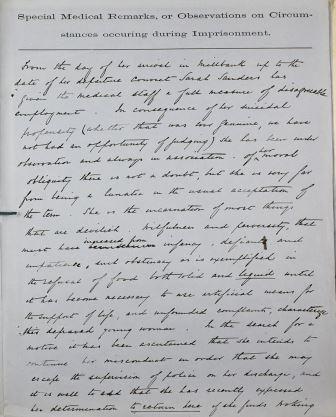 Criminals in the 19th century often didn’t have the best time, and many did not deserve the hardships they suffered considering the minor crimes they committed. However, for researchers, their records are a fantastic resource, not just for genealogy and criminal historians, but also for those of us who want to better understand the lives that working people led in the past.

‘Not a fair trial’: Edward Ashford’s petitions for mercy