My Tommy’s War: A trooper in Ypres

For today’s blog post, I would like to share the wartime experiences of my great uncle, Anton Henry Samuel Wassmer, who was killed in action 100 years ago yesterday.

Anton Henry Samuel was the eldest son of Anton and Therese Wassmer, who were married in London in 1887. My late grandmother would recall of Anton (senior) that he was a wig-maker from the East End of London. This has proven to be fairly accurate, with Anton (senior) listed as a hairdresser on the 1911, 1901 and 1891 Census returns. 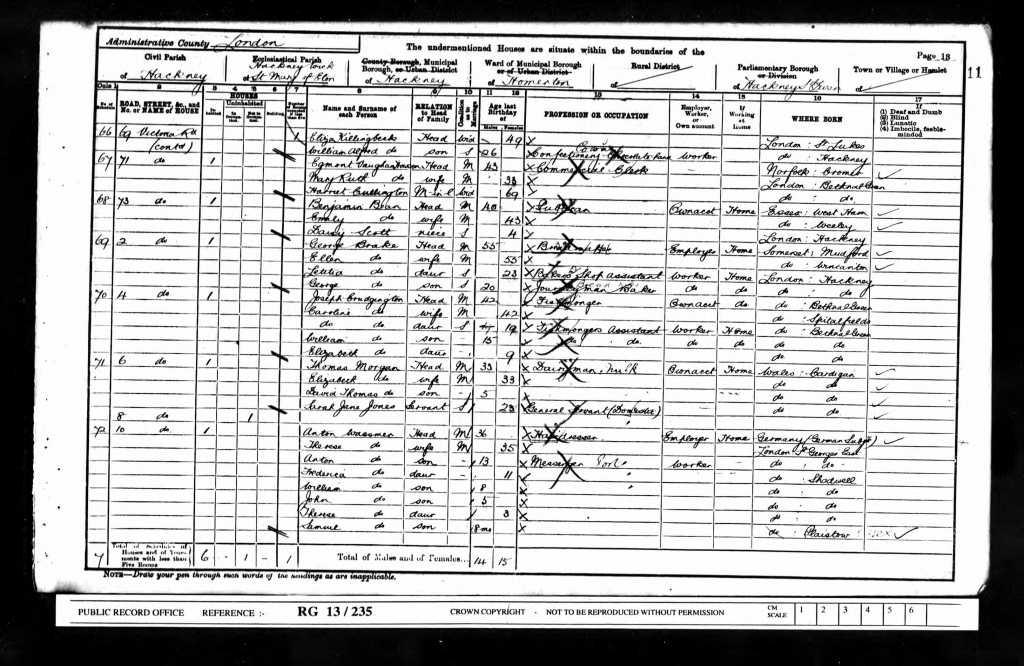 1901 Census of Wassmer family. Anton Henry Samuel is listed as a messenger, with his father is listed as a hairdresser and born in Germany. Catalogue reference: RG 13/235.

The Census returns also reveal that Anton (senior) was born in what is now modern day Germany. This obviously adds some further intrigue given the opposing forces of the First World War. Despite this, and with over 25 years residence in Britain, three of Anton’s sons – Anton Henry Samuel, William and John – served in the British Army during the First World War.

Like so many other soldiers who served in the First World War, Anton does not have a surviving service record available on Ancestry. Additionally, we do not have any private papers, diaries or photos within our side of the family. Therefore, the First World War Medal Index Card for Anton provides the starting point for researching his wartime service. It confirms, again, the use of Henry Samuel as his recorded name within the military, the three campaign medals he was entitled to and his Regiment as the 17 Lancers. Below the campaign medals is listed the date that Anton first went on active service overseas, 6 October 1914. In the remarks column is a date of discharge, which sadly is in fact his date of death, 30 October 1914 (WO 372/21/22403).

Medal Index Card for Henry Samuel Wassmer. The card confirms both Anton’s date of entry overseas and his date of death. Catalogue reference: WO 372/21/22403.

Given the slight inconsistency with the name used by Anton Henry Samuel, I referred to the Commonwealth War Graves commission website to be certain this was our Anton. Here I found full details of Anton’s death entry which confirmed his full name, his unit, place of memorial (Menin Gate), and the details of his parents, including their address in West Ham.

Having confirmed Anton’s date of embarkation overseas, his date of death and his military unit, the next step was to uncover what actually happened on 30 October 1914, and in the relatively brief period of active service in the weeks before this. The quickest way to research this area was using our unit war diaries, the army’s operational record, in WO 95.

Referring to the unit war diary of the 17 Lancers it quickly became evident that my research into this area was not going to be so straightforward. To put it simply, the 17 Lancers were not in France or Flanders on 30 October 1914. In fact, on 29 October they were moving through Suez en route from India to Marseilles, finally arriving on the 8 November (WO 95/1178/3).

I had known that it was common for soldiers on leave in Britain on the outbreak of war, as well as for reservists, to be posted into home based battalions, or separate Regiments altogether, so to bring them up to war strength. The task was now to try and find out the unit which Anton had been posted too. Firstly, I conducted a search of other members of the 17 Lancers who had died on the 30 or 31 October 1914. When checking the 21 men listed on the Commonwealth War Graves Commission website, six entries state that the individual soldier was attached to the 2 Life Guards. This gave me something to work with.

At this point I wrote to the Household Cavalry Museum and Archive to request a search of their records for any trace of Anton serving with the 2 Life Guards at this time. This was a paid search and was fairly swiftly answered considering the increased First World War requests being generated over the last year or so.

The reply confirmed that Trooper Henry Samuel Wassmer of the 17 Lancers is commemorated at the Household Cavalry Memorial, Zandvoorde. Although there were no service records confirming which unit that Anton had been serving with, there was confirmation that the units of the Household Cavalry, including the 2 Life Guards, were brought up to war strength by using soldiers of the Cavalry reserve or new recruits awaiting departure to Cavalry regiments overseas. Given Anton’s previous service with the 17 Lancers from at least 1911, I concluded that he must have been in the Cavalry Reserve or on leave at the outbreak of war in August 1914.

What proved to be the clincher in my search for which unit Anton had been attached too was a document much closer to home, as it were. The Official Medal Rolls for the British and Victory medals in WO 329 sometimes record the unit or battalion number of the Regiment served with. This is obviously a crucial piece of information for researchers when looking to move into operational records, such as war diaries which are arranged by unit or battalion number. On checking the entry for Anton, it recorded his unit as 17 Lancers, attached 2 Life Guards (WO 329/20). 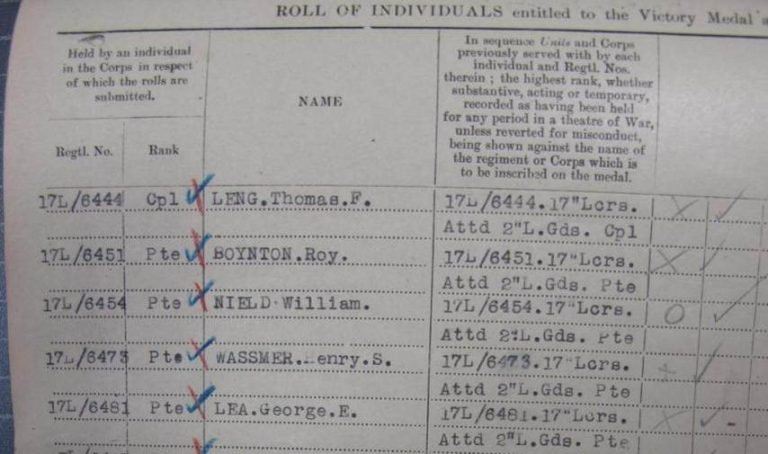 Official Medal Roll of 17 Lancers, confirming Anton’s attachment to the 2 Life Guards (WO 329/20)

I was now able to progress more confidently with my research and soon discovered an all too brief but action packed period for both Anton and the 2 Life Guards between August and the end of October 1914.

The unit war diary, available to view online, details that ‘men of 13 different Cavalry Regiments’, including many reservists, had been called upon to bring the 2 Life Guards up to war strength. During a fairly extensive period of training during August and September 1914, the regiment was inspected separately by both Lord Kitchener and His Majesty the King (WO 95/1155/2).

Having embarked for France on 6 October 1914, the 2 Life Guards soon found themselves moving towards Ypres and what would become the First Battle of Ypres. The war diary entries during this time show the rapidly changing environment on the front lines. On 13 October for example the 2 Life Guards were ordered to Menin and found that the town ‘was full of spies or German sympathisers’. On the following day there was ‘much excitement at the appearance of a German aeroplane’, which was subsequently shot down ‘at the expense of 100 rounds’. Later that day the unit witnessed ‘a tremendous bombardment’ from German artillery while moving towards Kemmel but chillingly acknowledge that they were ‘in absolute ignorance of the situation’ as they tried to seek cover (WO 95/1155/2).

Up until this point, the 2 Life Guards had been operating as a Cavalry unit but as October moves towards its conclusion, so it becomes increasingly apparent that the men of this unit and other Cavalry Regiments were being employed in infantry roles. On 20 October there is a reference to the first time that the 2 Life Guards had been forced to dig trenches as a result of continued enemy shelling. Then on 22 October they are ordered to ‘send every available man into the trenches’ to reinforce the British line near Zillebeke. On 26 October they make a dismounted attack on Kortewilde (WO 95/1155/2).

On 28 October the location of the unit is recorded as half a mile north-west of Zandvoorde. And it was here that Anton fell on the 30 October following an assault from the opposing German forces, which fell upon the advanced and exposed positions being held by the 2 Life Guards. The war diary records that:

‘The line of the right of B Squadron being driven back forced B Squadron to retire with losses. C Squadron would appear to have been surrounded and from the account of a single survivor of the squadron it is doubtful if any have escaped’ (WO 95/1155/2).

Attached to the war diary for October 1914 is a report written in 1923 by the former Adjutant of 2 Life Guards from 1914, who recalled the events of 30 October. Adjutant Menzies details a heavy bombardment had preceded the German attack and that owing to the advance positions held by squadrons of the Regiment, the men must have all been killed given the lack of survivors, wounded or prisoners of war (WO 95/1155/2). 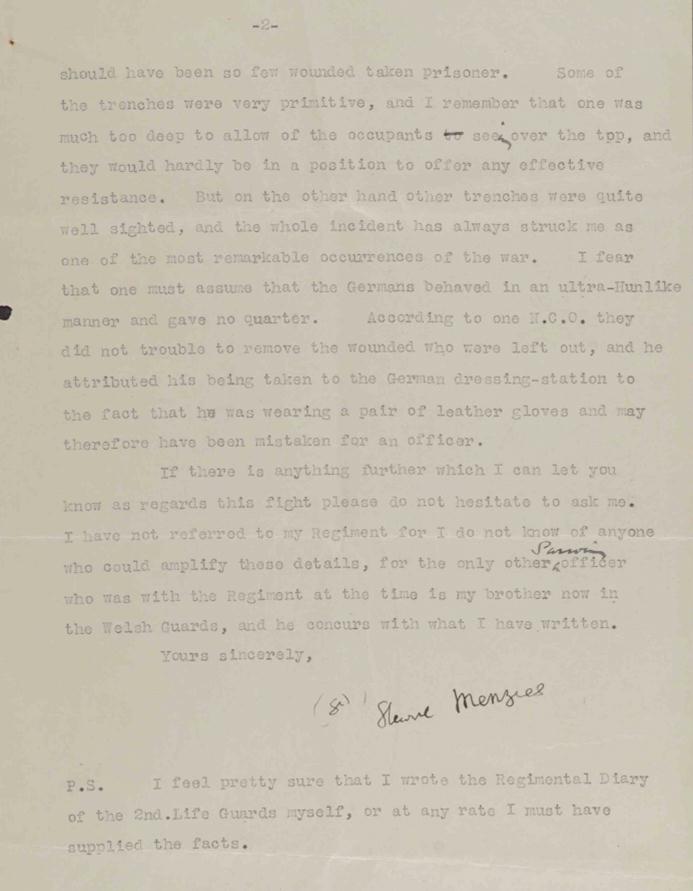 Menzies describes the British trenches as ‘very primitive’ with one so deep that the men inside could not see over the top to ‘offer any effective resistance’. Menzies continued by speculating that: ‘I fear that one must assume that the Germans behaved in an ultra-Hun like manner and gave no quarter. According to one NCO they did not trouble to remove the wounded who were left out’ (WO 95/1155/2).

The war diary of appendices from the 3 Cavalry Division General Staff contains a message from the 7 Cavalry Division confirming the casualty numbers for the 2 Life Guards on 30 October as ’28 rank and file killed, wounded or missing’ (WO 95/1142/1). Tragically, and as with so many others throughout the war, Anton Henry Samuel Wassmer, aged 27, was killed in action on 30 October 1914. He is listed on the Menin Gate and also honoured by the Household Cavalry memorial, Zandvoorde, Belgium.

Anton’s younger brothers, William and John, also fought during the conflict with the Machine Gun Corps and Royal Field Artillery respectively. William’s son, Leonard Alfred was killed during the Second World War while serving with the Royal Engineers and is remembered at the military cemetery in Ismailia, Egypt. Anton’s younger sister, Frederica, married Arthur Langrish in 1913, and are my great-grandparents.

Researching Anton’s story has been challenging but rewarding and I look forward to uncovering more information about the Wassmer’s as I continue my family history research in the years to come. Today I honour Anton’s sacrifice and bravery. We will remember them.