Home > Blog > My Tommy’s War: It started with a photograph

My Tommy’s War: It started with a photograph 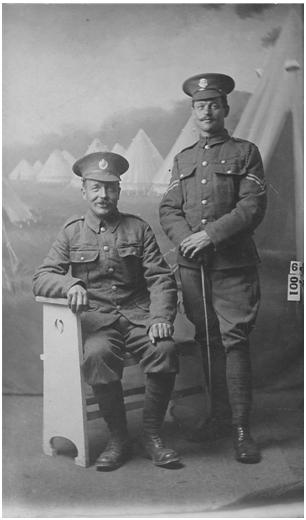 The mystery photograph - from a private collection

When I originally volunteered to contribute to the this series I planned to submit two posts: the first about a Tommy who fought on the front line and died of his injuries, and the second about a Tommy who remained on home soil doing a very different type of war work. Unfortunately, my research did not go to plan.

The person I had hoped to write about was my father’s paternal grandfather, Frederick James Newing. Frederick was a domestic chauffer for most of his working life, and I have always been told that he spent the war driving military vehicles on to transport ships at a port somewhere in Kent. The only item we have in our family collection related to Frederick’s war service is the photograph on the right. We found it in a box of miscellaneous family photos and it is unlabelled. My dad thought the two men pictured might be his granddad, Frederick, on the left, and his great uncle Harry, Frederick’s brother in law on the right. However, as both men passed away when he was a child he couldn’t be sure.

Unfortunately, despite searching extensively through the Soldiers Records (the so-called burnt records) on the Ancestry website and the First World War Army Medal cards on The National Archives website, I could not find anything about Frederick. It surprised me, as he has been very easy to track through the rest of his life. However, I know this is how research can sometimes turn out.

I decided to turn my attention instead to the second man in the photograph, thought to be my dad’s great uncle Harry. I knew from earlier research that Harry Crowne was born in St Pancras, London in 1886, and that his First World War service records survive in WO363. I remembered that he was a member of the Royal Garrison Artillery (RGA) and was promoted to the rank of bombardier. As the person on the right of the photograph has a stripe, we had used this evidence to support my dad’s theory that he is Harry.

I decided to focus on finding out more about Harry’s war. The attestation form contained in Harry’s record reveals that he originally signed up in Tottenham on 7th December 1915. He was 29 years and 11 months old, living in Tottenham, and occupation is given as ‘clerk’. Another sheet reveals that he had married Harriet Pickard and had two young daughters: two year old Minnie and 11 month old Constance.  Eight year old Robert Francis Pickard, Harriet’s son from her first marriage, is also listed. The page also tells us that Harry was 5 foot 8 inches tall and had a mole on his cheek. His fitness is described as A1.

The service record reveals that Harry was not mobilised until 6th March 1917. He was sent to Rugeley in Staffordshire, and was then assigned to the 352 Siege Battery of the Royal Garrison Artillery, part of the British Expeditionary Force. They arrived at Le Harve, France on 19 May that year, and moved to Ypres.

According to Wikipedia, during the First World War World ‘the RGA grew into a very large component of the British forces on the battlefield, being armed with heavy, large-calibre guns and howitzers’. So Harry was involved in firing very heavy guns.

Unfortunately however, the unit war diary of the 352 Siege Battery has not survived. I decided to see whether the diary of a unit they worked alongside survived. Helpfully, Sir Martin Farndale included a list of all Royal Artillery units in his book ‘History of the Royal Regiment of Artillery : Western Front 1914-18’ which is available in The National Archives library. A big thank you is due to the member of library staff at Firepower Royal Artillery Museum who advised me over the telephone to refer to it. This revealed that 352 Siege Battery was part of the 2nd Brigade, which was in turn part of the Second Army.

As I now knew that Harry’s battery was a part of the 2nd Brigade I searched for the relevant unit war diary in Discovery, and found it at WO 95/296. The brigade war diary provided some very interesting summary information. I couldn’t work out from the figures provided how many rounds each gun was likely to fire each day, but estimated from the figures for overall rounds fired each day by the brigade that it could be up to 100. Firing these huge guns must have been noisy, dangerous and heavy work, although the casualty figures provided in the diaries suggest it was far safer than being in an infantry regiment.

My biggest surprise was that the brigade fired gas rounds.  My maternal great grandfather died as a result of injuries sustained in a German gas attack, possibly in the same battle that great great uncle Harry’s unit fired gas rounds from the British side.

Harry’s service records give some more details about his time in France and about army life in general. On 30th August 1917 he was disciplined for writing and posting a letter which contained forbidden information. The records state that this was repeatedly forbidden on battery orders. Harry received ‘7 days F. P. No. 2’ for this. The useful Long Long Trail website informed me that this stood for Field Punishment Number 2, which would have involved Harry being shackled.

That incident does not seem to have damaged his reputation, as he was later promoted to lance bombardier, then to bombardier. Finally in November 1919, by which time he had transferred to the Royal Army Service Corps and was part of the pool of clerks, he was appointed Lance Sergeant.

Harry was released from the army on 3rd December 1919, and returned home. As a nice final touch his service record includes a letter he sent after the war requesting that his date of mobilisation be corrected in his records. The letter is written in the beautifully neat handwriting I would expect of an early twentieth century clerk.

So what have I learnt from my research? My advice is not to be disheartened if your research doesn’t go the way you hope it will. Your investigations might reveal something else which is just as interesting and involving. Although I was disappointed not to find out about my great grandfather’s war, I enjoyed learning more about the Royal Garrison Artillery and am planning a trip to Firepower to see a World War I Howitzer.

If anyone reading this is able to provide any additional information about which units the men in the photograph may have belonged to I would be very grateful.