Home > Blog > My Tommy’s War: on the home front in Essex and Suffolk

My Tommy’s War: on the home front in Essex and Suffolk

At the start of the centenary commemorations of the First World War in 2014, I was surprised to discover that my maternal great-grandfather had served in the forces. This had never been mentioned (as far as I can recall) and I had assumed (always a fatal mistake) that, like my paternal great-grandfather, he had not been called up and not volunteered. 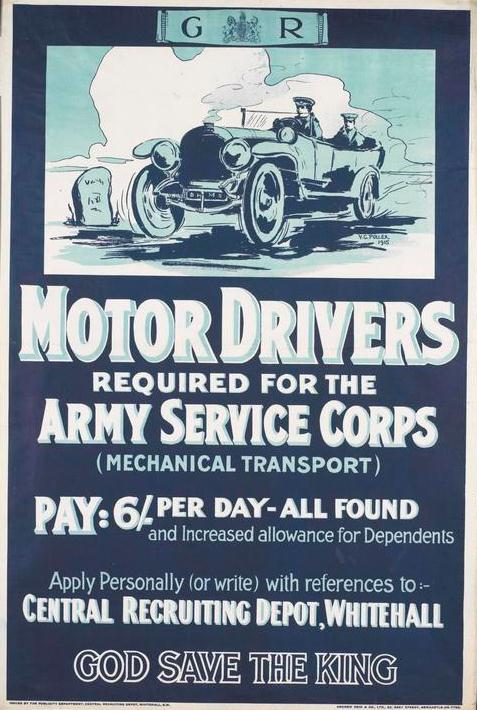 He joined on 27 August 1915 in Malvern, Worcestershire. An engineer and fitter by trade, he specifically volunteered to join the Army Service Corps (ASC). He had had some previous military experience, having served five years in the 2nd Volunteer Battalion, the Worcestershire Regiment.

Now, recently widowed, he made the decision to join up, leaving his young family in the care of his parents. On attesting he gave as his next of kin his nine year old daughter Dorothy. He also gave details of his late wife Anne, and his other children: Donald, aged seven, and Stanley, aged five months.

He must have written to the Central Recruiting Depot and received a War Office pro forma letter to report to the recruiting officer in Malvern. He was appointed to the Army Service Corps (Mechanical Transport Branch) joining at the MT Depot, Grove Park, Lee on 2 September. Grove Park was a former workhouse owned by Greenwich Board of Guardians, which had been taken over by the War Office and used as an ASC barracks for training recruits. After his initial training he was allocated to 373 (MT) Company, ASC on 6 November. The company was based at Bedford with sub-workshops at Chelmsford, Essex and East Bergholt, Suffolk. 1

M2/120027 Pte Charles Edward McPherson was appointed unpaid acting lance corporal on 16 July 1916. He was probably based at the sub-workshop at Chelmsford, where he was transferred to the newly formed 978 Company on 1 October 1917. The work of the company was to supply and maintain all MT vehicles attached to units in the whole of Essex and Suffolk south of a line from Haverhill to Aldburgh.

The sub-workshop at Chelmsford was handed over to 978 Company. The strength of the company changed very little for the duration of the war. The average was 25 officers, 95 non-commissioned officers and 893 other ranks. Charles was one of some 52 corporals on the strength of the unit. The number of vehicles on its formation was approximately 1,100, some sent from Kempton Park, others from 373 (MT) Company at Bedford. This number was increased to 1,200 by March 1918.

978 (MT) Company, ASC was formed on the 1 October 1917 from part of 373 (MT) Company. The new company was commanded by Major T R Nuttall and occupied a disused iron foundry in the village of Claydon, Suffolk some five miles from Ipswich. The premises consisted of two corrugated iron sheds in a field. The larger one was used for general repairs and the smaller one as a blacksmith and moulder shop. There was a road and parking space but no accommodation. The village institute was requisitioned for technical stores and tyres were stored in a barn in the neighbouring village of Blakenham. New storage and office buildings were erected to replace the temporary arrangements. Accommodation for the personnel at HQ was to be Barham workhouse!

The depot at Claydon was supplied with electric light by a generator and a water pump was installed. Initially water had been supplied from the nearby river and later a well. The workshop had lathes, drilling machines, a grinder and a case-hardening furnace. Later, additional adapter grinders were made for the lathes. There was an Hernsby engine and, as backup, an Aveling and Porter tractor. There were many old and non-standard vehicles on the strength so repairs were not always straightforward. Many parts were unobtainable and had to be made on site. As the author of the unit history later wrote:

‘The credit for this important and very useful work is due to a well equipped Foundry, and capable staff.’

The only repairs they could not deal with themselves was the making of gears. The company was responsible for maintaining the searchlight and gun lorries of the anti-aircraft and mobile brigades stationed in the river Crouch district; also the vehicles of the anti-aircraft defences of North London and Harwich. The unit history records:

‘The roads of Essex and Suffolk are fairly good although the ground in many parts is inclined to be hilly. In wet weather the roads in the vicinity of River Crouch in Essex are often under water, which makes transport in this district extremely difficult.’ 2 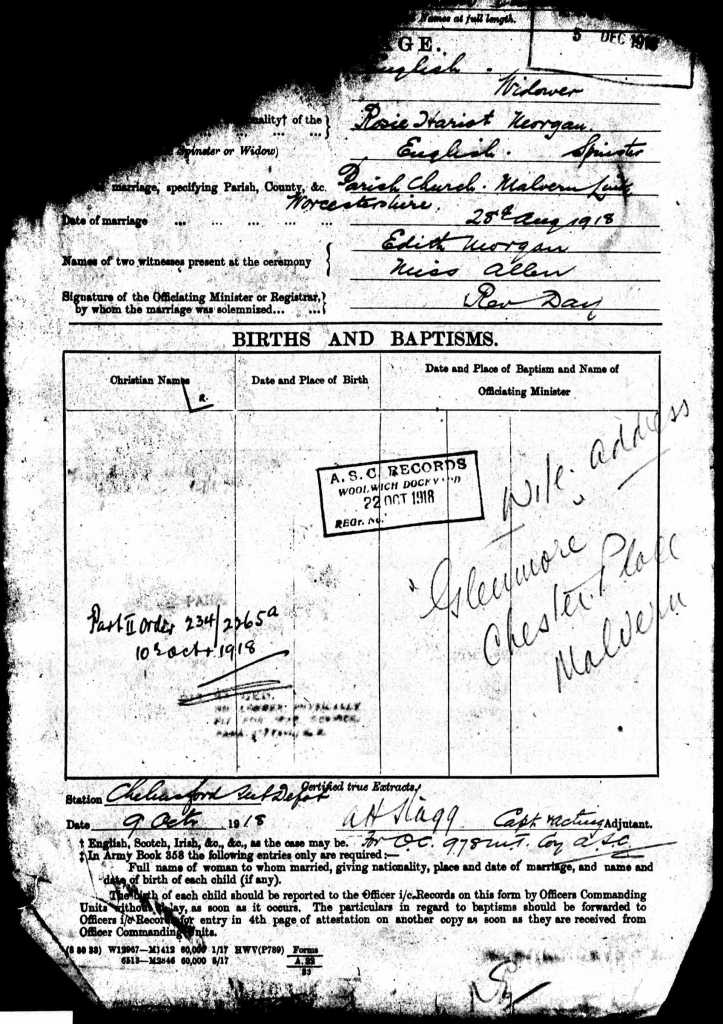 Charles had become a paid acting lance corporal on 27 November 1917 and his time with 978 Company was divided between the main workshop at Claydon and the sub-workshop at Chelmsford. In 1918 members of the Women’s Legion were attached to the company and a woman superintendent was appointed in February. The women replaced men as drivers of light cars, ambulances and boxbody vehicles. Charles spent his time in the repair shops working on the vehicles rather than as a driver. In August 1918 he obtained leave to return to Malvern to marry his second wife, Rosie Harriet Morgan, who had been nurse to his children and midwife.

In October 1918 Major Nuttall was succeeded by Major Grant as Officer Commanding. The number of vehicles decreased; some 324 were withdrawn to form two cyclist brigades. By the armistice the number was down to 620 vehicles. By early 1919 the company was reduced to 18 officers, 92 non-commissioned officers, and 456 other ranks. There were also 28 women of Queen Mary’s Auxiliary Army Corps and 93 drivers of the Women’s Legion most of whom were based at Claydon. The sub-workshop at Chelmsford under Captain GB de Murray had 2 officers, with 15 non-commissioned officers and 62 men, 2 QMAAC and 5 Women’s Legion drivers. Nearly half of the vehicles (300) were at Chelmsford.

Although his service record survives there is no medical history sheet and something happened to his eyesight. Either he sustained and injury in the workshop, or more likely his eyesight just deteriorated and Charles was sent for an examination in early February 1919.

No longer physically fit, he was discharged at Chelmsford on 22 February. His service was officially completed on 2 March 1919 and he subsequently received a silver war badge. 3