My grandfather, Herbert Randolph Elvin, or Bert as he was known, passed away in December 1972, aged 73. I had only just turned 13, and I cannot remember him ever discussing anything to do with the Great War. Maybe he thought because of my young age I would not be interested; perhaps he was right, as I cannot remember being that interested in the First World War during my early teens. Perhaps he was so traumatised by what he saw that he wanted to forget.

However what I do remember is that on his mantelpiece in his living room he had an A1 size photograph of himself sat astride a horse. I think I never questioned why he was on a horse and it was not until much later in my life, when I had traced his army service record, that things became clearer. 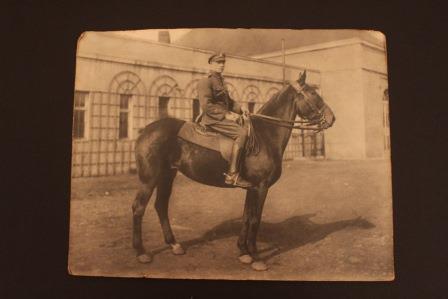 Bert was born on 1 March 1899 at 31 Warham Street, Lambeth, the only surviving child of Charles Benjamin and Caroline Elvin (nee Plummer); he did have a sister, who died at a young age. Family life did not to go well for Bert. In 1906 his father died; his mother remarried in 1908 (to a William Piddock) only to pass away just over a year later, leaving young Bert to be brought up by his stepfather. Until I started doing my family tree in my late teens I didn’t know any of this information, as my grandfather never talked about it and certainly did not volunteer it to my own father.

I established through his medal card in the first instance that he enlisted into the Army Service Corps. Through his service record (Regimental Number 54346 and R/330093) (catalogue reference: WO 363/E369), which fortunately survived, I established that initially he enlisted as a cook at Lambeth. He was attested on 28 February 1917, transferred to the Army reserve on 1 March, mobilized on 9 May and then served with The Remounts (35 Remount Squadron) on 10 May 1917 at Swaythling. He became a groom, which tends to suggests he posed for a photograph on one of the many horses he looked after.

At the outbreak of war in 1914 the British Army had a total establishment of 25,000 horses and mules, five Remount Depots and four Remount companies with a strength of approximately 1,200 animals. At its peak in 1917, the army establishment reached almost 870,000 horses and mules, with accommodation for 60,000 animals. To cope with this increase, four additional main home depots were established, at Shirehampton, Romsey, Ormskirk and Swaythling, and the capacity and complement of each depot were also increased.

At Swaythling, where my grandfather was stationed, there were 3,530 horses and mules stabled and cared for by 757 men on 1 April 1919 (several months after the end of the war); it was also a collection centre for animals being shipped abroad. The establishment of officers and men was also increased to cope with this number of animals, from 121 officers and 230 men in August 1914 to 423 officers and 20,560 men in 1917.

His service record does not give any indication that he ever fired a gun in anger, and he may have never even held a rifle (except in training). He served both in France (from 2 September 1917 to 25 November 1917) and Italy (26 November 1917 at the Base Remount Depot) to when he was discharged on 28 November 1919 as a Private. On the reverse side of his medal card there is the unusual occurrence of an address (11 Bonnington Square, Kennington).

In addition to his medal card (catalogue reference: WO 372/6/204015)  and surviving service record there is also a discharged to Pension record (catalogue reference: WO 364/1137), indicating that he injured a finger on his left hand on 30 November 1918 when it was caught in the cogs of a clipping machine. During the war, and throughout his lifetime, he suffered from severe skin complaints, including dermatitis and eczema, which meant a number of periods of enforced hospital treatment (at Cremona, Genoa and Havre); in fact, only three months in 1918 were totally free of stays in hospital.

In 1922 he married my grandmother, Violet Isabel (nee Windaybank), although it was a family rumour that her ‘sweetheart’ had perished in the Great War, and Bert was ‘on the rebound’.

He applied for and appears to have collected the British War and Victory medals on 10 October 1923, although sadly they appear to have been lost over the course of time; they were never passed on to my father, who was an only surviving child (he had a brother and a sister who both died in infancy). There was a further family rumour that my father fell out with his father: my grandfather appears in none of my parents’ wedding photos. It is possible that he threw his medals away in a fit of pique, not wanting to hand them over to his son.

His diverse occupations meant after the war he became a bicycle mechanic. In approximately 1930 he moved from Lambeth to West Hampstead, and then to Kidbrooke in south east London in the last few years of his life.