In some ways, this blog post has been over 15 years in the making. During my GCSEs I was properly introduced to the First World War while on a battlefield trip to Flanders. I still have my class notes, and the memory of being at the Menin Gate while the Last Post sounded is something I will never forget. I would strongly encourage anyone interested in the First World War to make the trip over to Belgium for this experience. It was also on this trip that I was first ‘introduced’ to Ernest Cowdrey.

My school had, through the Commonwealth War Graves, tracked down my ancestor at Talana Farm cemetery. Although not part of our planned itinerary I remember the coach pulling over and having to run through the fields to a small secluded cemetery. I took some pictures and felt an immense feeling of pride – my ancestor had in some way contributed to the war that I’d been learning so much about. I was also shocked to discover he was only 19 when he died – at the time, only three or four years older than I was myself.

It was the dark days before Google and I wasn’t really aware of what research I could do, so, after sending photos from my trip to relatives, I didn’t find out anymore about Ernest until, a few years later, the BBC ran a documentary about The Forgotten Battlefield. It turns out that Ernest was involved in this lost battle so, of course, I made my university friends watch it! It was amazing to discover that his part in the war, like the others from his battalion, had been somewhat forgotten by history. Although previously overshadowed by Ypres and Gallipoli, the fighting at Boesinghe was finally being uncovered. At the time it felt like I knew everything there was to know – I’d even seen the excavated trenches where Ernest could have been. Whizz forward to 2012 and I volunteered to write a My Tommy’s War blog post and began to realise just how little I knew… 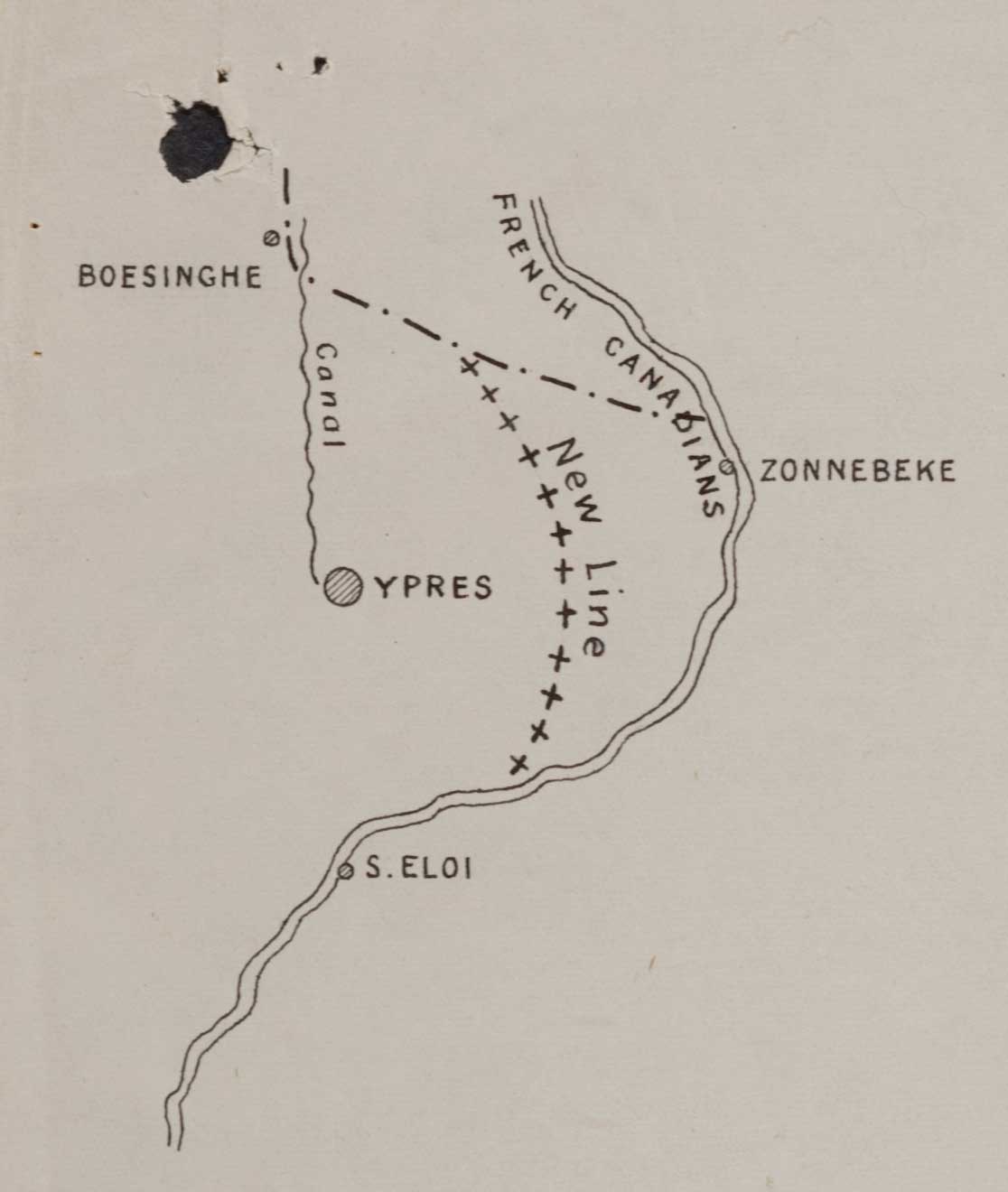 So, for me, the starting point was the picture I’d taken, all those years ago, at Talana Farm cemetery. From his headstone, I had some key pieces of information:

If you’re planning a battlefields tour, or even if you’re not, you can search the Commonwealth War Graves Commission online to get similar information.

I know where he died and when; his regiment number; and his battalion. Thanks to the BBC documentary I also knew something of what happened – a seemingly large push on 6 July 1915, which at the time Hubert Plumer, Commander of the British troops, declared would ‘go down in history as one of the great battles of the campaign’. Instead it fell into historical oblivion. There were, however, many things I didn’t know – what was Ernest like? when did he sign up? what was his experience of war? and, most poignantly, how did he die?

Armed with the details I had, it was time to hit the collection at The National Archives. Our research guide Looking for the records of the First World War, along with Looking for records of a British army soldier after 1913 has some great advice for you if you’re also at the beginning of your search. 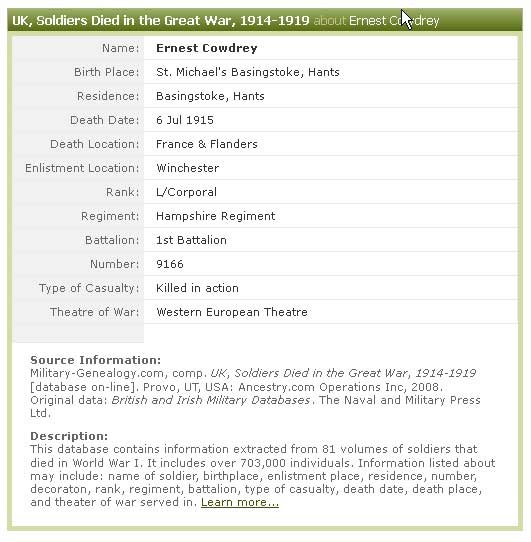 [/caption]First up, I went to Ancestry. Here I searched the ‘Soldiers died in Great War 1914-19’ and from this entry found some new information. Ernest’s birth place was St Michael’s, Basingstoke and he had enlisted in Winchester. It also confirmed that he was killed in action on the Western European Theatre (France and Flanders).

Whilst on Ancestry I also searched the medal index cards and was surprised to find two cards! They both appear to be for my Tommy, as they have the same regimental number (9166). One card is for the Star medal and the other for the Victory medal. The date of entry for the index card for the Star medal was 23/08/14. I wondered if this was the date that Ernest signed up. I ran a search in the service records, but wasn’t surprised to find that, sadly, his record was part of the 60% destroyed during a Second World War bombing raid. I’m not really sure how else to go about finding out more information on his recruitment. Does the early date suggest that he was in the regulars?

This made me wonder about the man (or boy) who had signed up. I looked up Ernest Cowdrey on the 1911 Census. I found him, living in May Street, Basingstoke with his parents and seven brothers and sisters. He was a labourer/engineer. 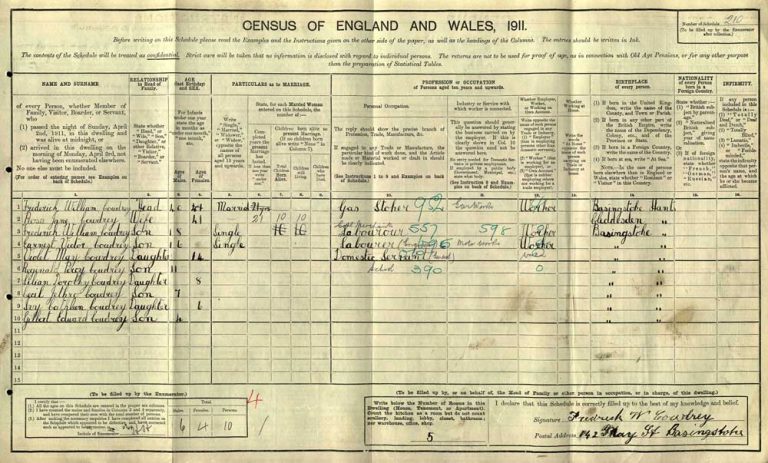 1911 Census return for 142 May Street, where Ernest lived with his family

I’d previously looked at the war diary for the 1st Battalion Hampshire regiment as part of the Voices of the Armistice podcast series back in 2008. The diary gives an outline of the events on 6 July 1915 – a British counter-attack, following a German gas attack six weeks earlier. After an hour’s artillery barrage the troops went over the top at 06:00. Over 120 soldiers died that day, moving the front line forward a mere 30 yards. A few days later, the battalion’s ‘spendid’ doctor, Captain G. C. Gwynne, was killed, and is named in the war diary. But beyond ranked officers it’s quite unusual for individuals to be named. It can feel quite disappointing that the soldiers aren’t all name-checked, especially when they gave their all. But the war diaries were intended as a record of operations, which is why any instances of personal detail should really be treasured.

Last of all, I searched the new Soldiers Wills. Ernest had indeed made a will, seemingly in the first few days of landing in France. It was amazing to see his handwriting and also reassuring to see that the address matched the address I’d found on the census. Unsurprisingly for someone so young, he left everything to his mum. I can’t image how he would have felt, aged 18, writing a will. 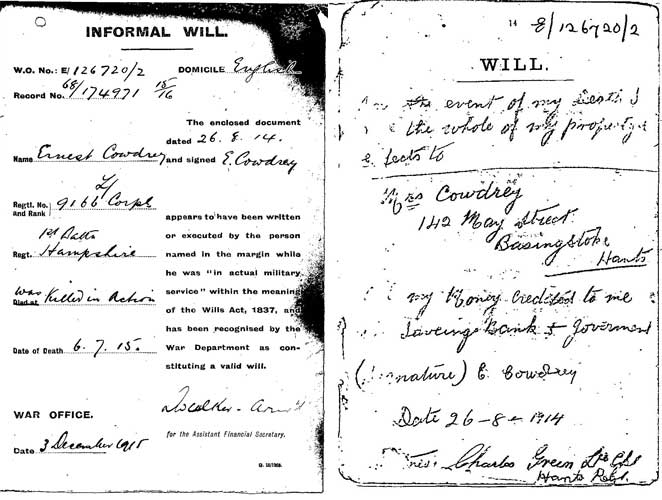 Ernest Cowdrey’s will downloaded from gov.uk/probate-search

I finally turned to Google to see if I could find out any other information about the battalion’s history. On the Long, Long Trail website I discovered that 23 August (the date on the medal card) was the day the 1st battalion landed in Le Havre. His regiment was part of the 4th division, originally meant to be part of the British Expeditionary Force, but held back at the last minute, to counter any German landing. The Hampshire regiment served throughout the war, were awarded 82 battle honours – the highest number for any regiment during the First World War, and lost 7,580 men.

So what are my next steps? Having discovered (I think) that Ernest was a member of the regular army, I’d like to find out more about the Hampshire regiment – I plan to revisit the war diary, read the regimental history (Royal Hampshire Regiment 1914-1918) and hopefully pay a visit to the regimental archives at Serles House.

I also want to turn my attention to finding out as much as I can about what happened on 6 July 1915. From the BBC documentary I know that there were other regiments involved on that day including the 1st Battalion Rifle Brigade, the Lancashire Fusiliers and the 5 Battalion York and Lancasters. I’ll try ordering their war diaries to see if they can provide any other information about the day that’s not recorded in the Hampshire war diary.

From the CWGC website I can see the soldiers, buried in the same cemetery, who died on the same day. I’d especially like to find out more about those men who were also from the Hampshire regiment. These were:

It feels fitting, with the approaching centenary that we all discover as much as we can about our Tommies and First World War ancestors. By the anniversary of the fighting at Boesinghe I hope to come back and be able to reveal much more of Ernest’s story.