My Tommy’s War: Construction and destruction with the Royal Engineers

My great-grandfather Chris Bale was born a year later and four more children followed. The 1901 census shows the family living in rooms in a house on the since demolished Price Street along with a blacksmith and his family. By 1911, they were on Milman Street close to the town’s Alexandra docks and the recently constructed Transporter Bridge. Both of William’s grandfathers had also worked on the docks but the 16-year-old is listed as being an apprentice hot water engineer. Things would soon change for young William as war broke out across Europe. 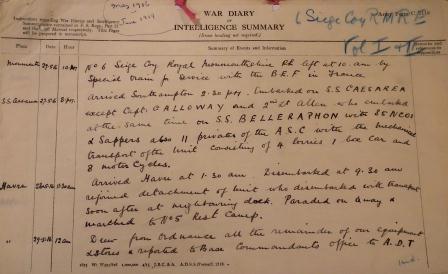 I had looked into some family history a few years ago and returned to my notes in preparation for this blog. I knew two of my maternal grandfather’s uncles, Charles and Walter Carter, had fought in France and Belgium (more on them another time) but I didn’t know of anybody else involved in the First World War. However, the Newport Registration Office Absent Voters List of Autumn 1917-Autumn 1918 held at Newport Reference Library revealed both William and Chris Bale were serving. I found the family’s Milman Street address in the list and there were their names. 21 year old Private Chris Bale was with the 15th (Transport Workers) Battalion, South Lancashire Regiment, working at Merseyside docks. He would continue as a coal trimmer at the docks in Newport after the war. Lance Corporal William Bale was with the 6th (Royal Monmouth) Siege Company, Royal Engineers. Crucially, the absent voters list also included both Chris and William’s regimental numbers which proved vital as my research continued. 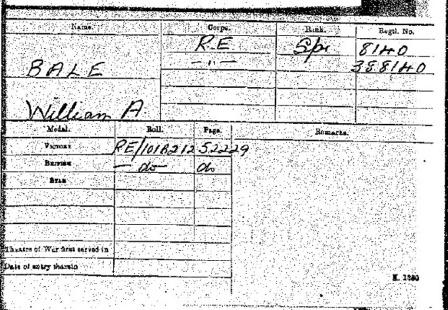 Using The National Archives’ Discovery catalogue, I found William’s record among the War Office Service Medal and Award Rolls Index (WO 372). Listed as a Sapper, he was awarded the Victory and British War medals. The Medal and Award Roll book itself (WO 329) added no new information so I then ordered up the May 1916 – June 1919 Unit War Diary of his company with some trepidation, wondering what information WO 95/331 would reveal about my great grand-uncle’s experiences. But first, I looked at the War Office Soldiers’ Documents (WO 363) on Ancestry. I had already searched this ‘burnt documents’ collection for details on the Carter brothers but to no avail. As I anticipated, a search for variations of William A Bale also came up with nothing. So, instead, I tried his regiment number which I had first found in the absent voters list. And a record came up. He had been listed as ‘William Ball’ but on scrutinising the fragments of documents with which I was presented, I discovered that this was indeed my ancestor.

Zooming in on the fragments, I found William had signed up at Monmouth on 22 November, 1915. On 27 May, 1916 his company left for France: three weeks short of William’s 22nd birthday. They arrived the following day. This made me think back to what I was doing in the weeks before my own 22nd birthday: working at a record store filling time between finishing my undergraduate degree and starting a course in journalism. Going off to war was not something on my agenda. But for William it was. The war had been going on for 17 months when William and his company embarked. What would he have been feeling and thinking? What did he already know about the conflict? How did his parents feel? These are questions I’ll never answer. 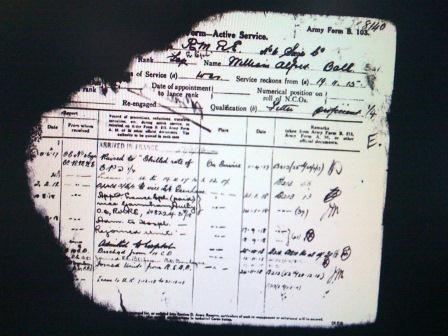 What I now do know, however, are personal facts which build a picture of William. The burnt documents reveal William was 21; 5ft 7½ ins tall; weighed 121lbs; confirm his address; and include his signature. Also recorded are his chest measurements, the fact he had 6/6 (20/20) vision and that he had two vaccination marks on his left arm from infancy. He listed his trade as a ‘fitter’ and he was not married and not served in the military before. He was promoted to Lance Corporal on 14 January, 1918. The final fragment detailed he had been admitted to hospital twice during his service: for one night on 17 September, 1918; and for three weeks on 25 October, 1918. He was discharged on 15 November, 1918 meaning he was in hospital when the Armistice was agreed. Thankfully, William survived the brutal conflict and he left the Army on 15 February 1919. I turned to the Unit War Diary, armed with these additional dates hoping for a mention of William.

The first page of the diary confirms the company took a ‘special train for service with the BEF in France’ from Monmouth to Southampton, before boarding the SS Caesarea. The company was led by Major David and Captain Christian Galloway, a 36-year-old Welsh-born mining engineer of Scottish descent who had served in the Boer War. The unit landed at Le Havre before making their way to Étaples where the company’s main work involved the construction of camps, hospitals, bridges and ammunition depots in the surrounding area, which included Le Touquet, St Omer and Dannes. Eighty years later I spent several family holidays in the same area but I had no idea of my link to the region until I opened this war diary. Later the company moved to Elzenwalle, near Ypres, where they laid pipelines – often under shell fire – then on to Ouderdom, and Reninghelst, in West Flanders, where they received orders to build a bridge capable of carrying tanks. Several technical drawings of bridges and bridge building were tucked inside the diary. 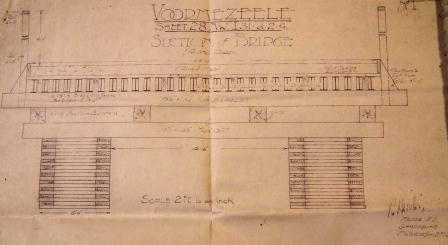 They were also building road bridges at the Battle of Courtrai in September and October 1918, when William was taken to hospital for that second time. The company was in the grip of a deadly influenza epidemic – 96 men were affected, some fatally – as well as being under shell attack at times. Sadly, after cross-referencing the dates from the burnt documents, there were no mentions of William’s promotion or details of why he was sent to hospital on or around the relevant dates.

At this point, this is where William’s story ends for me. But I’m keen to learn more and will report back here with my results soon.