Set cookie preferences
Home > Blog > My Tommy and Hetty’s War: the show must go on

My Tommy and Hetty’s War: the show must go on 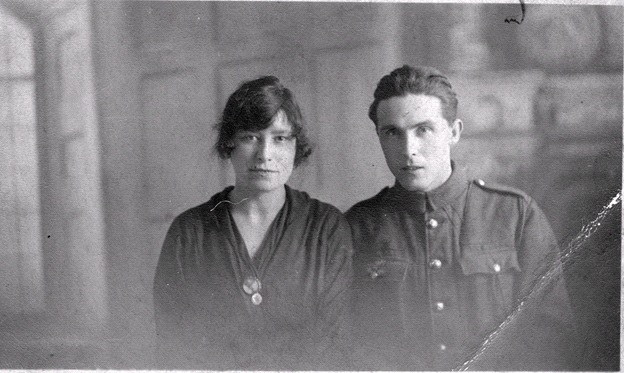 Photo of Hetty and Dan before he left for the Front

This is the tale of two Londoners, Daniel Edward Patrick Donoghue and Caroline Hetty May Pearne (my great grandparents), and their part in the Great War which – fortunately for them (and me!) – they both survived. But not unscathed.

Both Daniel and Caroline (who was also known as Hetty, as well as Cissy or ‘Ciss’ among the family) were from West London. They were one of many couples torn apart when the war broke out in 1914. 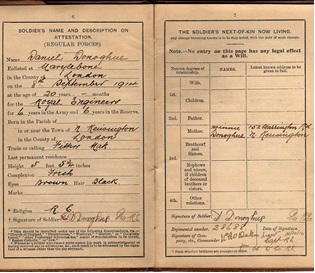 A young man, a soldier and now a number: Daniel was one of millions of men who would fight for their country and await their fate against the odds.

Once enlisted, Dan left his normal life and joined his unit at the training camp in Aldershot before leaving for the Front. 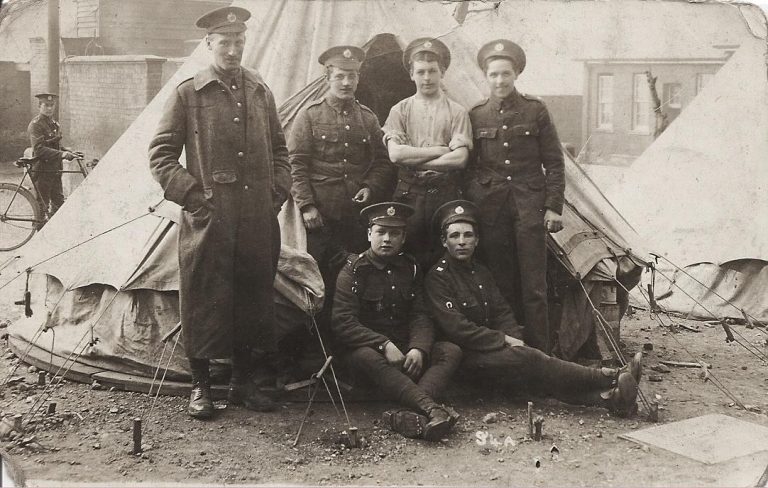 Daniel was part of the 95th Field Corps. His rank was ‘Sapper/Pioneer’ and he spent some time on the Front, although it’s not clear for how long. His Medal Card notes a date of 21 October 1915 and from looking at the unit war diary (WO 95/1645) for this date, we can see that he would have been in Gorre, near Beuvry, France at this time. It notes that they were working on emplacements for gas which were ‘very troublesome’ and the following pages notes that three sappers were wounded. I wonder if he was one of them. Unfortunately, there’s no way to be sure. 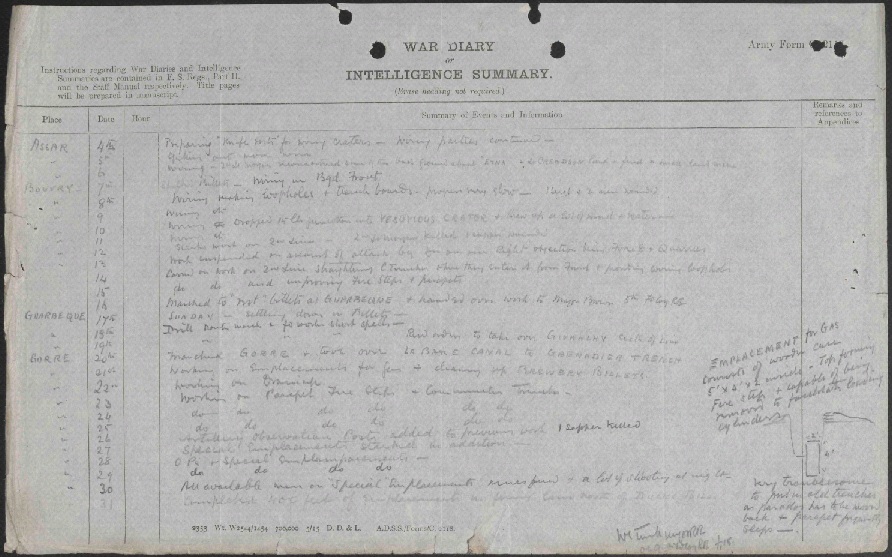 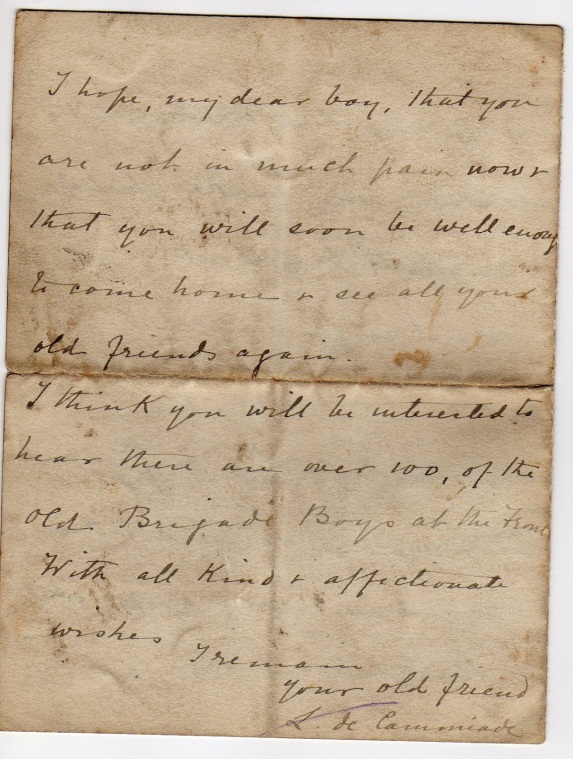 As my great grandfather survived the war, my uncle and grandmother were lucky enough to have been given a first-hand account by Daniel himself. We don’t know exactly when it was, but we do know that he was working in the trenches, mostly laying field telephones, when there was an explosion which resulted in severe burns to his face and the rest of his body. After suffering these injuries, he was transferred back to England so that his injuries could be treated, being declared ‘surplus to Military Requirement having suffered impairment since entry’.

In our personal family archive, we have a letter written to Dan from one of his ‘old friends from the Front’. It explains that he had only just received the letter from Willie Hardell in France (another friend) about Dan’s accident in which he asked him to break the news to Dan’s mother. Frustratingly, the date of the letter is illegible but the story within in it survives and sheds light on how the news of his accident was received back home. The letter describes how Dan’s friend visited Dan’s mother to break the news to find out that the news had just reached her. He explained that he had comforted her and offered some reassurance that he felt Dan would get over his injuries as he was still young ‘but patience, of course, was required’. He ends the letter wishing him well and gives him news of the ‘old brigade boys on the Front’. 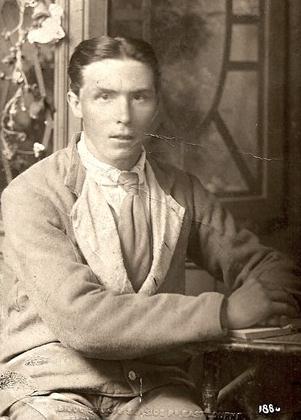 Daniel in the convalescent home near Liverpool

Daniel spent quite a lot of time in a convalescent home near Liverpool. There, he received some of the most pioneering plastic surgery of the day to reconstruct his lower face. According to my grandmother (Daniel’s daughter), when she was growing up she could only see the evidence of plastic surgery when he was in direct sunlight: you could see the slight difference in complexion. Apparently Dan’s mother and Hetty were unaware that he was back in England until well over a year into his recovery.

While Daniel was recovering in the convalescent home, he learnt how to play the mandolin, clarinet and banjo. He played in several concerts. My grandmother even has some old concert programmes to prove he was quite the entertainer. Rumour has it that we might still have some of instruments in the attic, but I’ve not been able to find them yet. 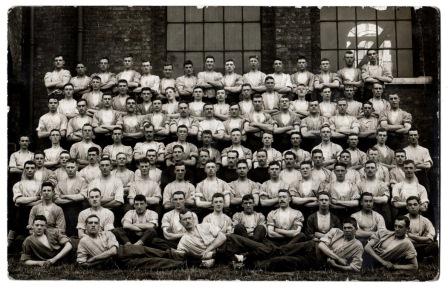 Group photo of soldiers in the Convalescent Home near Liverpool

Learning all these instruments was quite an accomplishment for someone who had had serious facial injuries and reconstructive surgery. Clearly the British Army agreed, because he was then attached to a Divisional Concert Party and sent back out to Mons towards the end of the war to entertain the troops (as the photographer’s stamp on the reverse of this photo shows). Here he is, post plastic-surgery, in his tuxedo ready to show the other troops that ‘the show must go on’. 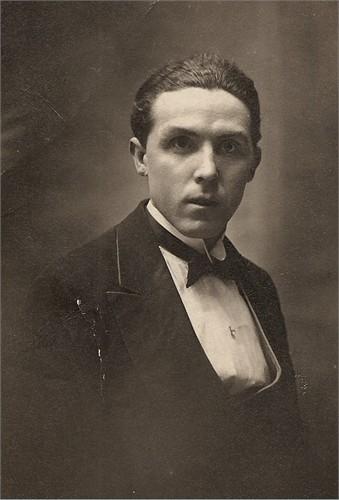 Daniel served four years and 301 days before he was discharged on 5 July 1919. His character was described as ‘very good, honest, sober, reliable and very hardworking’ in his discharge sheet. I don’t doubt it. He received the Star 1914-15, British War Medal and the Victory Medal for his service with the Royal Engineers.

Caroline Hetty May Pearne born 9 November 1894, worked at Barker’s Coachworks in Shepherd’s Bush during the war. Barker’s was originally founded in 1710 and lasted well into the 20th century, providing the bodywork for many luxurious carriages such as Rolls Royce. 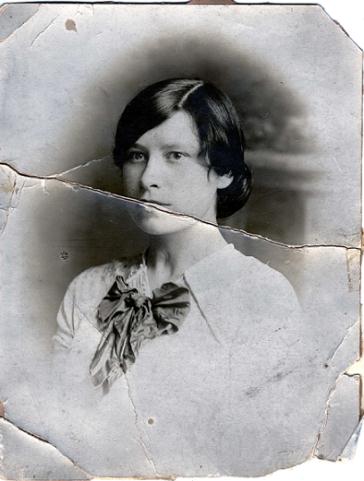 When war broke out, Barker’s attentions turned to making aeroplane wings. With so many men signed up to fight, presumably they needed to hire the only available workforce: women. The photo below shows Hetty (second row, second from the right) and other female colleagues (including her sister Tilly – second row, second from the left), the first row holding part of the frame of an aeroplane wing.

Interestingly there is a message to Dan from Hetty on the back of this photograph, suggesting that it was sent to Dan during the war. I wonder whether it made it to Dan over in France? It certainly looks like it has been in the wars – in fact it has made it through two world wars – but there is no stamp, so perhaps it was in among another letter sent to Dan.

Daniel’s story was relatively easy to trace through official records, but Hetty’s was not, which is often the case when researching female ancestors. Many of the insights are collated through personal family papers and photos but there are some official papers where we can trace her history, most notably, her marriage.

When Daniel settled back into his life in London after the war, he (aged 28) married Hetty (aged 27) on Christmas Eve 1922. 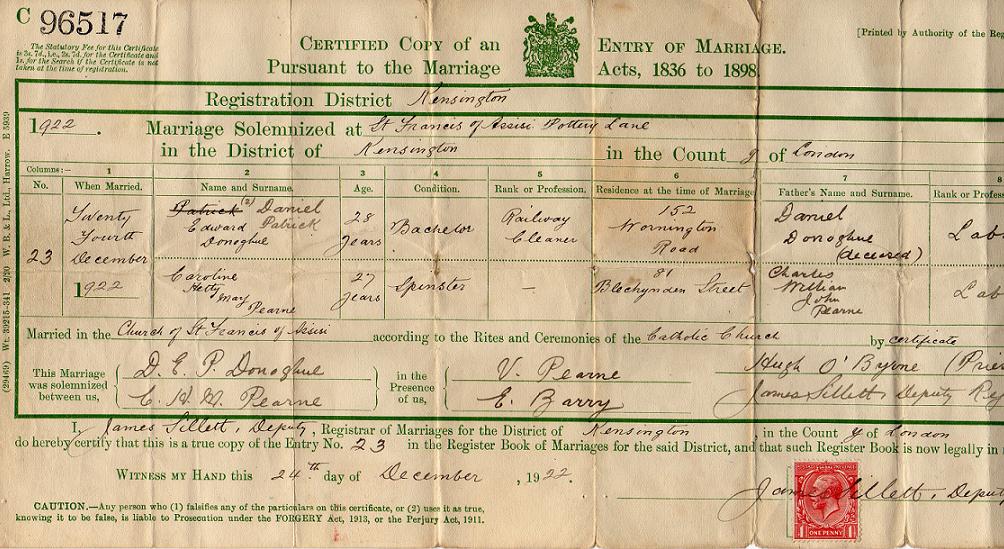 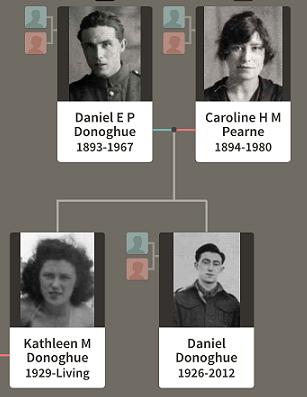 Family tree on Ancestry showing Dan, Hetty and their children

Four years later, in 1926, they had a son together. Named after his father, Daniel went on to serve in the Second World War and lived well into old age.

In 1929, seven years after their marriage, they had Kathleen Donoghue, my grandmother, who has safely kept many of the great photographs featured in this post and provided a lot of fascinating first-hand experiences of her parents Daniel and Hetty. Kathleen went on to raise ten children, a small army of her own, and have a successful career as a seamstress with a lot of her work making it into Biba and Vogue in the 1970s – but that’s a story for another day.

Daniel Edward Patrick Donoghue raised his children and lived through the Second World War; we still have his National Identity Card. I can’t imagine what it must have felt like to have got through the First World War having suffered serious injuries, thinking that peace had at least been restored, only to have another world war 20 years later.

Daniel worked as a cleaning inspector at the railway sheds up until he retired. He died on 13 December 1967 at their family home on Bryony Road in Hammersmith. Caroline Hetty May Pearne lived until she was 86. She died in 1980, 13 years after Daniel died.

Tracing the steps of my ancestors 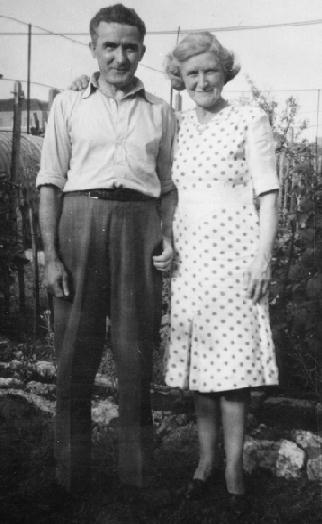 Dan and Hetty in their garden, Bryony Road Hammersmith, c. 1950

With my mother being one of ten children, the prospect of researching my family history always felt like it would be a huge and complicated task. Fortunately, my uncle Terry had done most of the research into our personal family archive, filling in our family tree on Ancestry with photos, birth, death and marriage certificates as well as personal letters, all carefully stored by my grandmother.

Coupled with her fascinating first-hand accounts and the help of Discovery, I could piece together this very personal First World War history.

If you want to look into your own family history, there is a very useful guide to searching your First World War family history on The National Archives website. As a tip, a good place to start is the Medal Index Cards (WO 372) where you can find the number and unit of your ancestor, which you can then use to find the unit war diary (WO 95) to trace your ancestors’ footsteps.

As this post has hopefully proved, it’s also incredibly important to treasure your family photos and letters. Don’t forget to talk to your relatives to uncover different perspectives and insights which reveal the decisions and thoughts that led to where you are today.