Today is the eve of the centenary of the sinking of Titanic. The ship struck the iceberg on 14 April at about 11.40 pm, but the anniversary of the sinking is on the 15th, since it had not become fully submerged until 2.40 am. 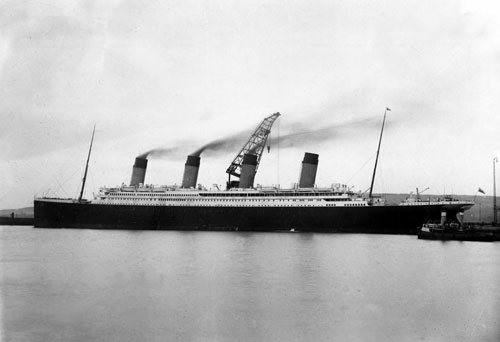 “Not another update about Titanic”, I can hear everybody groan. “Haven’t we heard enough?” Well, we’re almost there now. Bear with it a little longer and Titanoraks such as me will melt back into the night more quickly than the infamous iceberg.

At least I have reasonable cause for my fixation. My great grandfather, Frederick Woodford, was a crew member on board Titanic. Unfortunately he didn’t survive but he did make it into the water and most probably died from hypothermia. His body was recovered two weeks later and he is buried in Halifax, Nova Scotia, one of the closest stretches of dry land to where the ship sank.

But I don’t want to blog about that. We have been bombarded with publications all claiming to be the definitive history of Titanic , retelling the stories of passengers and crew ad nauseam, until even I am beginning to find the whole subject a little overcooked for my taste.

Instead I want to tell you about just one document in our collection at The National Archives, the statement of claim and verdict in the case of Ryan v. the Oceanic Steam Navigation Company. It is very much a story of David and Goliath, with the underdog taking on the corporate giant and winning.

Initially, when Titanic sank, the company (better known as White Star Line) did not pay a penny in general compensation. The crew were contracted to receive half pay during the voyage and half at the end of the voyage. When Titanic struck the iceberg and sank she terminated her voyage and the balance of wages for the journey was all that the company would pay out. Similarly, the passengers got a raw deal. A statement was printed on the back of tickets for Titanic stating that the owners accepted no liability for any loss deemed to be caused by negligent navigation of the vessel.

Assisted by Thomas Scanlon, MP for North Sligo, the father of Patrick Ryan and the family of James Moran, both Titanic victims, brought a joint legal suit against the owners claiming damages for loss of life and thereby loss of monetary support. Thomas Ryan said that his son Patrick was a cattle dealer and had been earning about £2 per week and was the sole support of the plaintiff. The particulars of negligence followed the findings of the Commission of Enquiry, claiming that the ship had been navigated at an excessive speed in view of the exceptional darkness of the night, the hazy condition of the atmosphere, the absence of wind and movement at sea and the knowledge that icebergs and ice fields were present on the path that Titanic was taking.

Ryan and his lawyers argued that despite this knowledge the commanding officers failed to alter their course or to diminish their speed. The company failed to provide a sufficient look-out and to supply the look-out men with binoculars, insufficient lifeboat accommodation was provided  in view of the number of passengers and crew Titanic was carrying and the crew were insufficiently drilled in filling and launching the lifeboats. The jury, likewise, followed the verdict of the Commission and the judge found in favour of the plaintiffs. Despite an appeal by the company the verdict was upheld and White Star Line, or the oceanic Steam Navigation Company, were ordered to pay damages of £100. 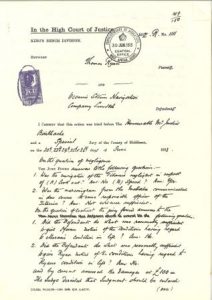 This should have paved the way for other cases and indeed some followed in the United States, the home of J P Morgan’s International Mercantile Marine Company that owned White Star/OSNC and several other shipping companies. However, most of these cases were settled out of court and in the end only $663,000 or roughly £136,700 was defrayed in compensation to the claimants.

Look at the original documents in the case of Ryan v. the OSNC.

There is an onsite exhibition featuring original documents in our museum and a larger exhibition of facsimiles in our Research and Enquiry Room. These will be up until the end of May.

Find out more about Frederick Woodford, other crew and passengers from our Titanic biographies page.

Detailed passenger and crew biographies can be found on encyclopedia titanica.

Read the testimonies given by passengers and crew to the official US and UK inquiries.