A revolution in treatment: the Thomas splint

Ever since seeing a demonstration of how to use it, in a reconstruction of a Casualty Clearing Station in Heaton Park, I have been interested in the Thomas splint. This splint revolutionised the manner in which men injured in the First World War were treated.

Introduced in 1916 to the Front, the Thomas splint reduced the rate of mortality from fractures (of the femur in particular) from 80% to 20%, in 1918.  1 The splint was originally designed by Hugh Owen Thomas, considered the father of orthopaedic surgery in Britain, with the intention that it would stabilise a fracture and prevent infection. However, it was not fully appreciated until his nephew, Robert Jones, introduced it for use in the war. 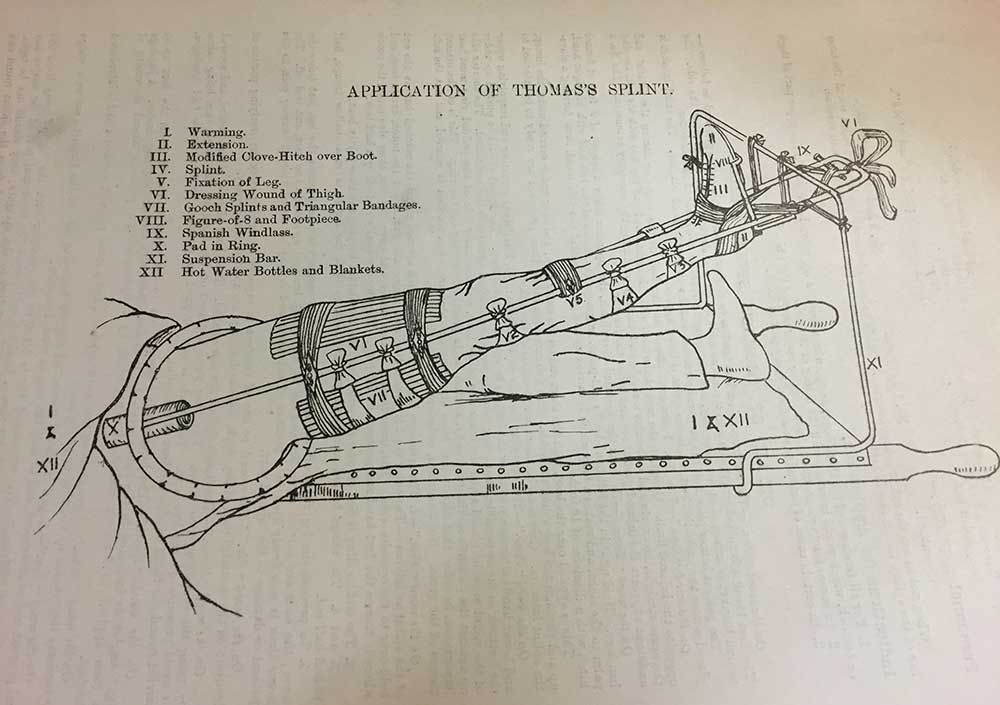 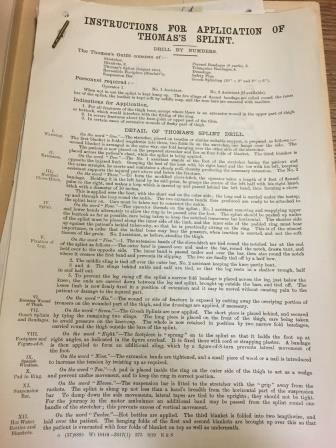 The instructions for application contain the following suggestions as to when it should be applied:

As Robert Jones states in his book ‘Notes On Military Orthopaedics’ these types of wounds need patience and time, which the Thomas splint can help with. He disparages those practitioners who do not take care to achieve accurate alignment, as they get nervous after a number of weeks and interfere with what he refers to as ‘delayed union’ – which can lead to a permanent disability. 2

Ideally, a team of three is required to apply the splint (an operator and two assistants) but it could be undertaken by just two members of the team, if necessary. There are 12 different stages in the application of the splint, which all serve to make the patient as comfortable as possible – including the last stage of applying hot water bottles. The main goal of this is to be able to move the patient without causing him pain, or any further damage to the injured part. 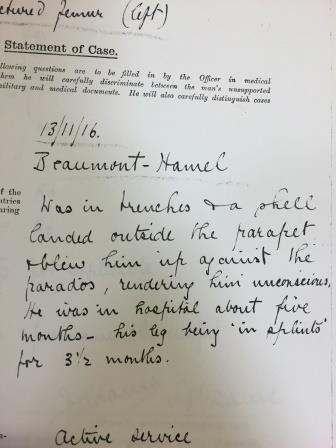 If you look through our Ministry of Pension files relating to those awarded for the First World War (in PIN 26) and search for ‘femur’, a number of men who suffered from fractured femurs are represented. One such man, Private George Henry Prentice, was in the trenches at Beaumont Hamel when a shell landed outside the parapet and blew him against the wall, rendering him unconscious. Within all of this, his left femur was also fractured. The most interesting part of his file is the section which states that his leg was ‘in splints’ for three and a half months. It doesn’t indicate specifically that this was a Thomas splint, but it is a possibility.

Further reading of his file shows that George did end up walking with a slight limp after his treatment. However, this is a much better outcome than that which other men had to deal with – there was no loss of limb or death in this situation. George suffered this injury in November 1916, which links nicely with the idea that treatment for fractured femurs had started to improve by this point.