This Friday sees the release of director Mike Leigh’s film ‘Peterloo’, which dramatises the events of the 1819 Peterloo Massacre.

On 16 August 1819, around 60,000 peaceful demonstrators gathered in St Peter’s Field, Manchester to hear pro-democracy speakers discuss the need for parliamentary reform. They were charged by armed cavalry. An estimated 15 people were killed, and around 700 injured.

This week, to coincide with the film’s release, we’re publishing three related blog posts. Dr Jacqueline Riding, the film’s historian, will write about how she used records from The National Archives to research for both the film and her new book, ‘Peterloo’. Dr George Hay will examine the impact and legacy the massacre had on law and order in the 19th century. But first up, Chris Day gives an overview of the events on that fateful day and of The National Archives’ unrivaled collections of sources. 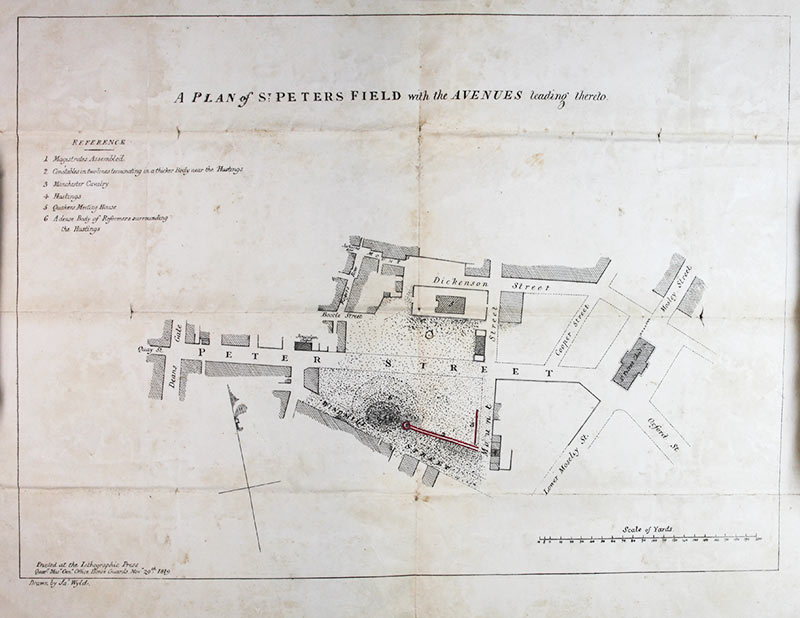 The Peterloo Massacre is a seminal event in the history of British democracy. Innocent citizens were cut down as cavalry from the Manchester and Salford Yeomanry (volunteer cavalry) and the 15th Hussars, in turn, charged at them with swords drawn. Fifteen people (including a child) were killed in the resulting melee. Peterloo (a play on words inspired by the Battle of Waterloo in 1815) became an infamous tragedy, but also a rallying point in the long, peaceful campaign for universal suffrage.

Prelude to a massacre – the background

Peterloo did not occur in a vacuum. Just as things came after it, it was a product of what came before.

Working men in England and Wales had been agitating for reform to Parliament since the late 18th century, in order to reform the country’s rotten electoral system – in 1780 the electorate in England and Wales consisted of just 214,000 people, less than 3% of the total population of approximately 8 million. 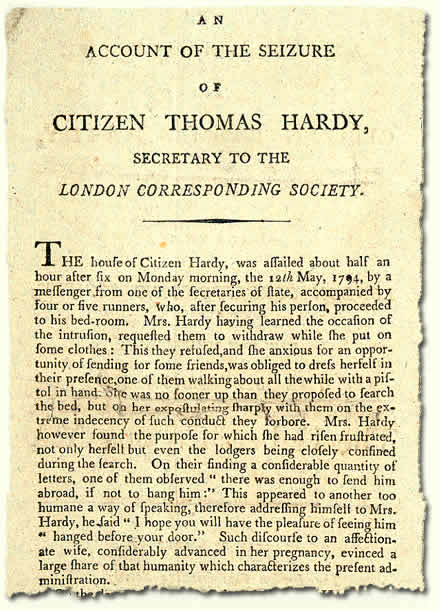 In response, working- and middle-class people began to form groups to agitate – sometimes peacefully, sometimes otherwise – for Parliamentary Reform. However, England’s ruling class, loath to give up their power, and shaken by the French Revolution, resisted and persecuted campaigners. Thomas Hardy, a radical who set up the London Corresponding Society to raise a petition calling for reform, was arrested for High Treason in 1794.

From 1812 onwards, similar societies – Hampden Clubs – began meeting all over the country. The Government passed the Seditious Meetings Act 1817 to make their meetings difficult to hold legally. Meanwhile, between 1811 and 1816 Luddites rebelled in the Midlands and the North, breaking machines they saw as threatening their livelihoods. 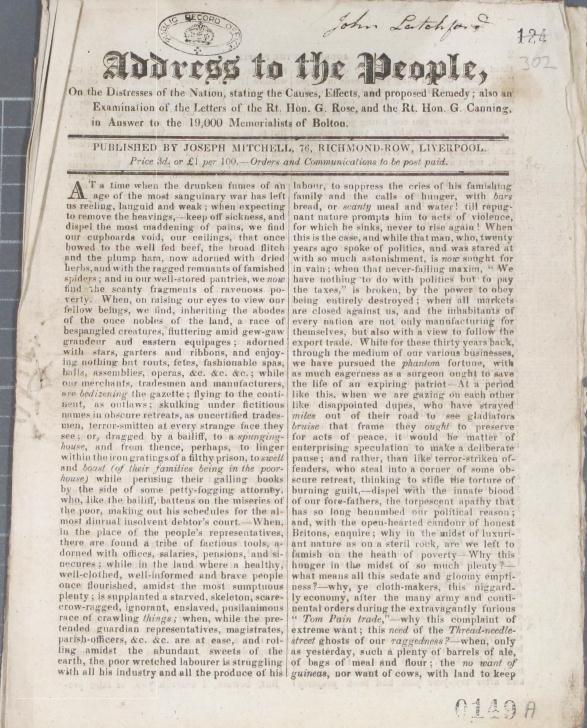 By 1817, the legacy of the Napoleonic Wars hung heavy over the country. The end of the war had depressed the economy. Poor harvests and the Corn Laws had pushed up the price of food. Radicalism flourished: one pamphlet bemoaned a society where ‘poor journeymen manufacturers, &c. are obliged to work late and early, to get money to pay enormous prices for food … [to] keep up the splendour of the landholder’ 1

This radicalism exploded into violence in 1817 with the Pentrich Rising in Derbyshire. In the evening of 9 June, around 50 men gathered to try and start a revolution. The march was disorganised and demoralised, and was soon broken up by 20 dragoons. Eighty-five people were arrested, and three were executed.

Pentrich was a scandal, but for the government as much as for would-be revolutionaries. It turned out that one man among the northern radicals who had agitated for a rising – William Oliver (AKA ‘Oliver the Spy’) – was a Home Office agent, who had informed on his comrades, and also likely encouraged them in their doomed revolution.

The presence of a spy led to some of the middle classes supporting reform, and the failure of violence put peaceful ‘constituionalist’ reformers in the driving-seat of the movement. It was under this peaceful banner that people met in 1819. 2

In the summer of 1819, Joseph Johnson, editor of the reform-minded paper the ‘Manchester Observer’, sought to arrange a public meeting in Manchester, ‘taking into consideration, the most speedy and effectual mode of obtaining Radical Reform in the Commons’.

He invited Henry ‘the orator’ Hunt, a well-known speaker, to the meeting. We know this because the government was intercepting their mail. Hunt agreed, but urged Johnson to publish their letters, to stir up publicity for the meeting. ‘By management’, he said, ‘the Largest assemblage may be procured at Manchester the 2nd of August that ever was seen in this Country.’ 3 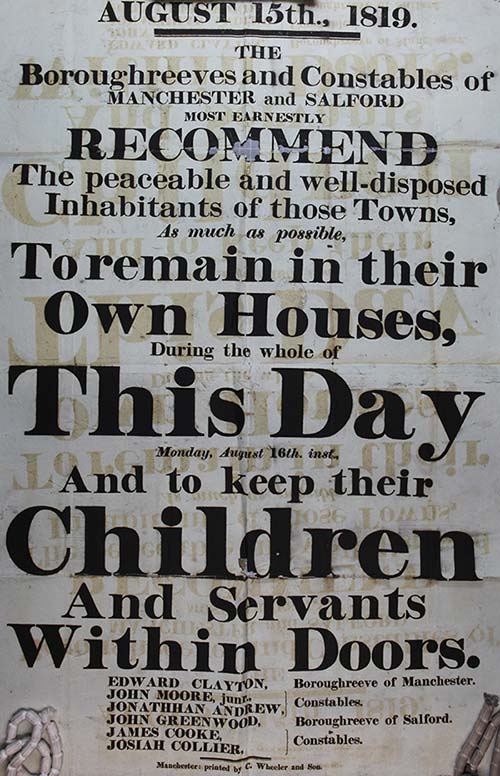 The meeting was pushed back several times by local magistrates, but Hunt’s prediction of the power of publicity and the draw of his personality were correct. Around 60,000 flocked to St Peter’s field on 16 August – more than 10% of the population of Greater Manchester at the time.

‘By the Law or the sword’

However, trouble was brewing. Despite the peaceful intentions of the reformers, the Lancashire Magistrates and the Home Office were petrified that the meeting would give rise to a revolutionary insurrection. Both sets of officials had, no doubt, been shaped by their experience of dealing with the violent radicalism of Luddism and Pentrich – as well as the spectre of the French Revolution and a fundamental belief in protecting the power and interests of the ruling classes.

This perception led them to see violence in the intentions of the meeting, and a fear that it would be the catalyst for the simmering tensions of 1819 England to boil over into an uprising. 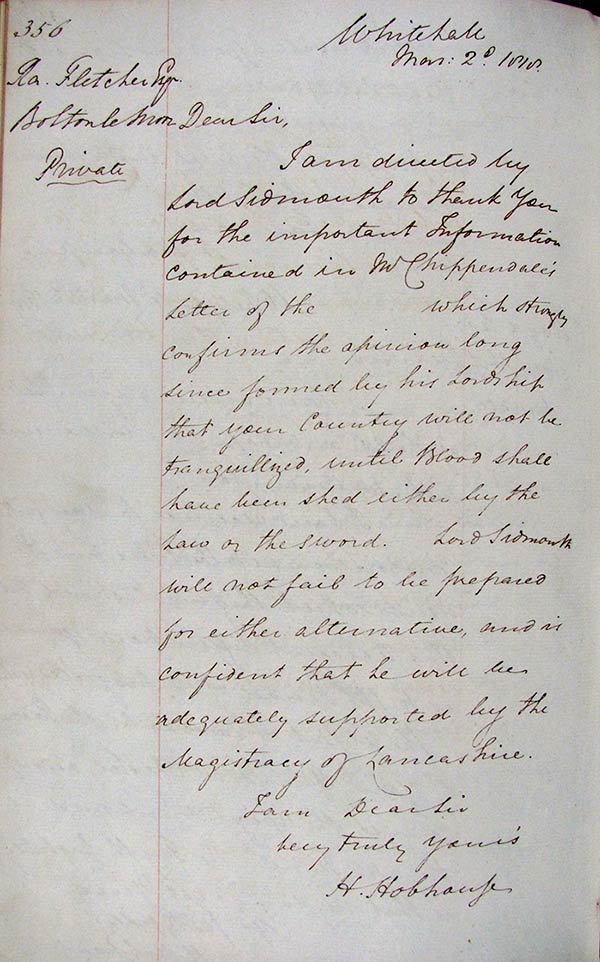 This apprehension of trouble, and the commitment to use force to quell it if necessary, is evident in the correspondence between the Home Office and the Lancashire Magistrates, which you can find in record series such as HO 42, HO 40, HO 41 and HO 79.

In March 1819, for instance, the Home Office – having received reports of disaffection in Lancashire from the magistrates there – said:

the important information… strongly confirms the opinion long held by his Lordship [Sidmouth, the Home Secretary] that your Country will not be tranquillized, until Blood shall have been shed either by the Law or the sword. Lord Sidmouth will not fail to be prepared for either alternative. 4

This belief that reformers were out for blood was not helped by the appearance of men being drilled in ‘the Principles of Military Movements’ on the moors around the town in the days before the meeting. In fact, this marching was done to practice and preserve order on the day of the meeting, but the government later explained that such a sight ‘could not fail exceedingly to increase the danger of every succeeding display of Physical Force’. 5

They prepared for violence.

And so, with grim inevitability, bloodshed did come to pass on 16 August, by the swords of the Yeomanry and the Hussars, but on the orders of the law-makers. The National Archives’ records give an insight into what it must have been like for the officials in the Home Office, as news of the events in the North began to trickle – and then flood – in.

The first was received by the Home Office late on 17 August, the day after the massacre. It was sent by Haigh Allen, a Huddersfield magistrate who worked as part of a Home Office network to report on meetings in the North.

The meeting took place at 1 o’clock Hunt in the chair with 16 flags and 7 caps of liberty hoisted up amongst upwards of 60,000 people the cavalry has just broke in upon them the flags are taken Hunt and his party secured. Several lives are lost and a number wounded. The cavalry are now scouring the streets in all directions.

And so it was. As the meeting got going, the magistrates moved to arrest Hunt and the other speakers and break up the meeting. Declaring later that they saw the ‘impossibility of its being executed without Military assistance’, they called up around 60 of the Yeomanry to seize Hunt. Later on, the Hussars joined in. 6

Major Dynley, a Hussar Office who was present that day, recounted that the ‘mob’ around hustings where the yeomanry were attempting to arrest Hunt and his companions attempted to resist this and ‘there was the —— to pay’. Dynley went on further to describe gleefully the scenes that followed. ‘The number that were rode over might have been very great,’ he remarked. ‘I don’t know that any of them were killed.’ He went on to praise the Yeomanry’s zealous approach to their bloody work:

I was very much amused to see the way in which the Volunteer Cavalry knocked the people about during the whole time we remained upon the ground; the Instant they saw 10 or a dozen mobbites together, they rode at them, & leathered them properly. 7

‘Evidence disproving some of the charges’, pamphlet published in the wake of Peterloo, November 1819. Catalogue reference: HO 42/199, folio 217

So what happened afterwards? The immediate effects of the Massacre could not have buoyed the reformers. Hunt, Johnson and others were arrested and convicted of sedition; Lord Sidmouth passed the infamous Six Acts, which greatly restricted political freedoms to organise, meet, or publish in favour of reform.

But the events of 16 August 1819 became a fable in English movements for parliamentary reform and democracy which still resonates today – the Massacre’s tragedy and essential injustice being used by radicals to propagandise for their own cause. 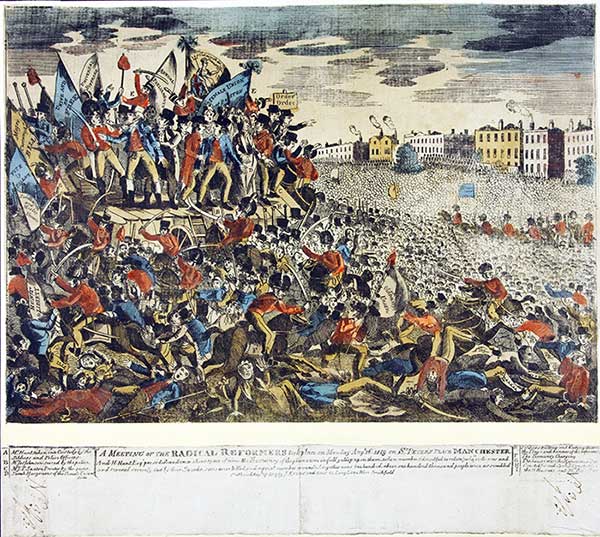 For instance, in November 1819, authorities in Devon forwarded the Home Office this remarkable, hand-coloured engraving of the Massacre, relating that a travelling showman was exhibiting it to the public, narrating it with ‘seditious expressions’. 8

Peterloo was not successful in gaining people the vote; while the Reform Acts of 1832, 1867 and 1884 expanded the franchise significantly in the 19th century, it was not until 1918 – nearly 100 years later – that the Representation of the People Act provided the universal male suffrage reformers had called for. (Universal female suffrage was not achieved until 1928). But throughout that century, the Massacre represented something to the people who campaigned for electoral reform: a driving force, which is still worth commemorating today.