The outbreak of the Second World War in 1939

Shortly before 05:00 on Friday 1 September 1939, German forces stormed the Polish frontier. When Hitler refused to abort his invasion, Britain declared war on Germany. At 11:15 on 3 September 1939, as the nation sat listening to their radios, the announcement was made by Prime Minister Neville Chamberlain  … Britain was now at war with Germany.

In the autumn of 1939, in what became known as the Phoney War, preparations were being made, but many people felt their lives would never be touched. However, all too soon, the reality of war began to bring suffering and hardship to thousands of people and to disrupt the peaceful routine of everyday life. Families were broken up as men were sent to the front lines to fight, some never to return, and children were evacuated from cities to stay with strangers, away from the bombing. Shops had limited supplies of food and what was available was often rationed. People built air raid shelters in their gardens and windows and doors had to be blacked out, while gas masks were carried for protection in case of a possible gas attack. 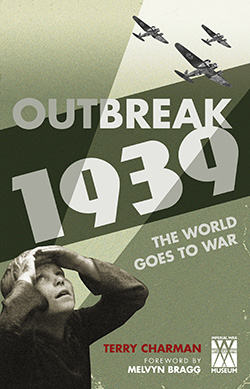 A definitive account of the build up and first few months of the Second World War is captured in the book, Outbreak 1939. Drawing on the Imperial War Museum’s extensive archives, the book features the personal stories of people who lived through the startling events of that year, with contributions from well-known figures who were actively involved in the political negotiations and their aftermath.

While at sea, the Battle of the Atlantic (3 September 1939 to 8 May 1945) was arguably the pivotal campaign of the war, and the longest. The early battles in the Atlantic heavily favoured the Germans, as they used their submarines (U-boats) to sneak up on British ships and sink them with torpedoes. The book Churchill’s Greatest Fear covers all the major aspects of the Battle of the Atlantic, balancing the initial advantages of Germany’s U-Boat force, the introduction of the convoy system, the role of the opposing surface fleets and air forces, and the technical developments of radar and depth charges. The book also covers the intelligence of the Bletchley Park intercepts and how breaking German secret codes played an important part in the battle and the rest of the war.

As part of the preparation for Operation Sealion, the invasion of Britain, the Luftwaffe (German Air Force) was sent to destroy Britain’s RAF and army defences. In July 1940 the Royal Air Force fought back in the Battle of Britain, in which they lost 792 planes and more than 500 pilots. By early September 1940, the German air force changed its strategy, concentrating now on bombing British towns and cities. This was the Blitz – night after night, until May 1941, German bombers attacked British cities, ports and industrial areas, leaving utter devastation and many civilians killed. 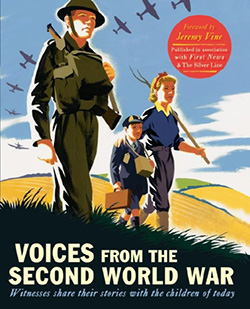 The story of the Second World War’s battles and key events is a familiar one to many but to give readers a greater and more in depth understanding of events, Voices from the Second World War brings to life emotions from those that were there and experienced the war first-hand. In the book there are a collection of moving accounts including a rear gunner who took part in 60 bombing raids, a Jewish woman who played in the orchestra at Auschwitz, a Japanese man who survived Hiroshima, and Sir Nicholas Winton, who saved 669 children by setting up the Kindertransport programme from Czechoslovakia. All these stories are fascinating to read and capture the spirit and courage of extraordinary people in this most dramatic yet tragic period of history.

In the years ahead on land, at sea, in the air and behind the front lines, individuals and nations would be tested to their limits, in a conflict that would have repercussions on the world stage for decades to come. 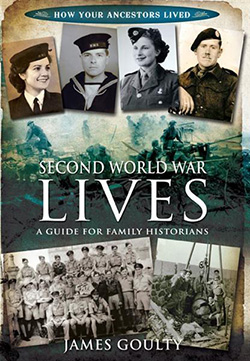 If you are interested in your own family history, there are numerous records available to researchers whose relatives served in the war. Second World War Lives is an accessible guide on how to locate and understand these sources and get the most out of them.

Using evidence collected from a range of archives, official documents, books and the internet, the book reconstructs the wartime records of a revealing and representative group of ordinary men and women such as an infantryman, a doctor, bomber pilots, and many more.

It’s a great book to use in researching your forebears that served in the war.