The Ministry of Records

At last, a hero who was a data specialist: Christopher Tietjens in the recent BBC adaptation of Parade’s End, four partially autobiographical novels by Ford Madox Ford,  beginning just before the First World War.

Tietjens is a civil servant in the newly created Department of Imperial Statistics: ‘a first class government office’ no less. In truth, there’s not much data crunching in Parade’s End, although more so in the books than in the television adaptation: one doesn’t feel that mugging up on standard deviation was a vital part of Benedict Cumberbatch’s preparation. But is there anything in The National Archives that could shed some light on what Tietjens and his department were doing?

I supposed the Department of Imperial Statistics to be a fictional version of what is now the Office for National Statistics. In 1912, the ONS predecessor was neither newly created, nor was it anything other than home based, indeed at this time it was under the parochial charge of the Local Government Board. We even have real some data from that era: the historic mortality files from 1901 – 1995 in RG 69, part of our National Digital Archive of Datasets (NDAD) collection. But Tietjens wasn’t tabulating native mortality; his masters were after the population of British Columbia and British North America. At the time of the high water mark of the British Empire, and all the administration and trade that went with it – if there wasn’t a Department of Imperial Statistics, you’d surely need to invent one…

Indeed in 1908 an MP had asked Mr Churchill, President of the Board of Trade, if he could do just that. Churchill replied: ‘Not on the spur of the moment’.

Evidently not, the Empire had to wait until 1922 before it had a proper Imperial Statistics Bureau – established just before the first Parade’s End novel, Some Do Not…, was published in 1924. The Bureau isn’t listed on our Catalogue as a separate department; however our Discovery search engine returns a clutch of related records.

Many of Madox Ford’s readers would have known that ‘Imperial Statistics‘ did not exist pre-war: it was perhaps a deliberate ploy, to reinforce the feeling of time being out of joint.

What did Ford Madox Ford, a novelist, know of statistics? The model for Tietjens may have been C.F. Masterman, who was a data specialist, and Head of the National Insurance Commission. Just before the war he and Madox Ford had toured Germany, Masterman in quest of facts about the German system of insurance. And Germany did have an Imperial Statistical Bureau. At the outbreak of war, Madox Ford went to work for the man who shared Tietjens’ passion for figures, in an outfit that that was dealing not with data, but propaganda.

Madox Ford was one of a band of famous novelists, ‘literary men and women whose work was well known abroad’ (INF 4/5), such as Arnold Bennett, G. K. Chesterton, John Galsworthy, Hilaire Belloc and Anthony Hope; who were recruited for the new War Propaganda Bureau. The Bureau, which later became part of the Ministry of Information, was referred to only as Wellington House, the office of the National Insurance Commission in which it was secretly housed. ‘Wellington House … was a producing and distributing department which purchased, or arranged for the production of books and pamphlets for distribution to various neutral and allied countries’.

The National Archives has a research guide on propaganda. None of the records of the Wartime Propaganda Bureau survived, but we do have detailed secret reports published by Masterman and others, and some personal papers of the leading players.

The aims of Masterman’s literary and artistic unit were firstly to win the ‘fight over the true interpretation of the … causes of war’, and later to produce ‘comment,  information and defence concerning the incidents of war, as they affect neutral rights’ (INF 4/5).

In particular the propaganda was to convey ‘The determination and ability of England to see it through to the end’ – a very Tietjens sentiment.

The propaganda was distributed through commercial outlets and personal contacts, Masterman stressed the importance of propaganda not being seen to come from a ‘“lie bureau” subsidised by Government money’.

Madox Ford supplied two books: one, When Blood is Their Argument: An Analysis of Prussian, is very anti German, although not in the crude atrocities mode. Madox Ford was half German, at that time his name was Ford Madox Hueffer; he perversely did not change his German surname to Ford until after the war. The other, Culture Between St. Dennis and St. George: A Sketch of Three Civilizations, is pro-French and English.

In his  fictionalised autobiography Return to Yesterday, Madox Ford mentions his poem On Heaven which he says was well liked in America but banned here by the Home Office on the grounds that ‘God appeared in it, God is forbidden to appear in England’. He claims the delicious irony that it was ‘later published under the auspices of the Ministry of Information – as government propaganda!’. However it does not appear in the list of his publications in INF 4/5.

The more you look into Ford Madox Ford, Parade’s End and his war time activities, the harder it becomes to disentangle fact from fiction. The Parade’s End novels are journey of disintegration. His hero starts off from a solid world of facts,  but, by using a department that did not exist until after the war and by having Tietjens asked to fake some figures, in Madox Ford’s fiction, the solid world of facts is already not what it seems, the world is already disintegrating. 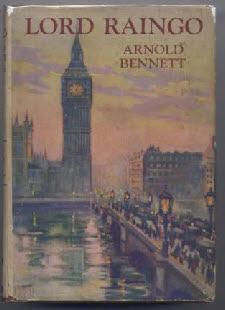 Another novel, contemporary with Parade’s End, that came out of the secret work of the War Propaganda Bureau and the Ministry of Information, was Lord Raingo by Arnold Bennett.

Although out of print, the text is available online from the Literary Heritage website.

Lord Raingo is a press baron, (based on Lord Beaverbrook, a friend of Bennett’s), who is asked by the prime minister to take on the production of propaganda in the, entirely fictitious, ‘Ministry of Records’.