The long road to reform: the Wolfenden report 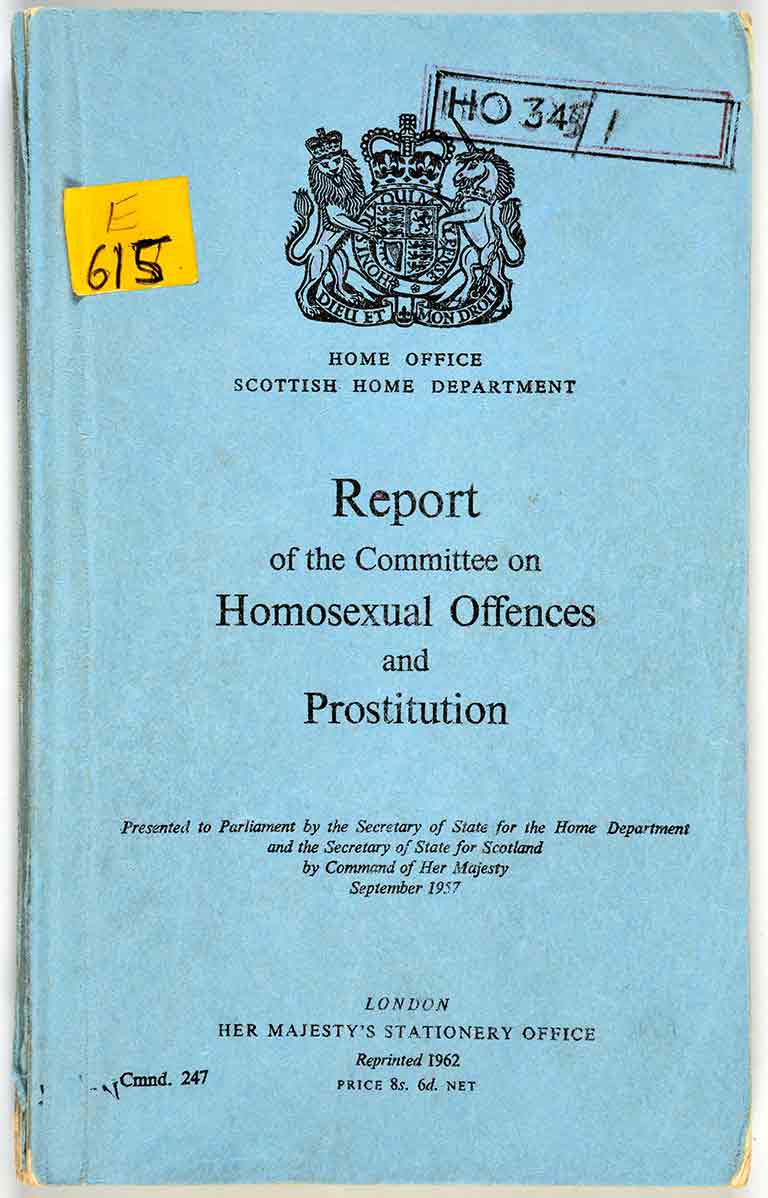 The Report of the Departmental Committee on Homosexual Offences and Prostitution (better known as the Wolfenden report), originally published in Britain on 4 September 1957 (catalogue reference: HO 345/1)

On 27 July 2017 the LGBT+ community will celebrate the 50th anniversary of the royal assent of the Sexual Offences Act 1967, which partially decriminalised male homosexuality in England and Wales.

By no means was this amendment to the law decided overnight, we ought to look 13 years earlier to the formation of the government’s Departmental Committee on Homosexual Offences and Prostitution – the ‘Wolfenden Committee’.

Pioneering studies such as Dr. Alfred Kinsey’s ‘Sexual Behavior of the Human Male’ (1948) and Mass Observation’s so-called ‘Little Kinsey’ (1949) reached the breakfast tables of Brits for the first time through national newspapers. 1 The studies contained intimate interviews relating to sexuality and sexual practices. From the immediate post-war period discussions about sex and sexuality were on the public agenda, and public agenda translated to political agenda.

In February 1954 Winston Churchill’s Conservative government began debating the need to reform laws relating to sexual offences, namely, prostitution and homosexual crimes. Since the war, prostitution in London was on the rise and high profile cases relating to homosexual offences proliferated in the media by the early 1950s. 2 One such famous trial was that of Lord Montagu of Beaulieu, Michael Pitt-Rivers and Peter Wildeblood in 1953, who were tried, found guilty of crimes relating to homosexuality and sentenced to 15 months, 18 months and 18 months in prison respectively. 3 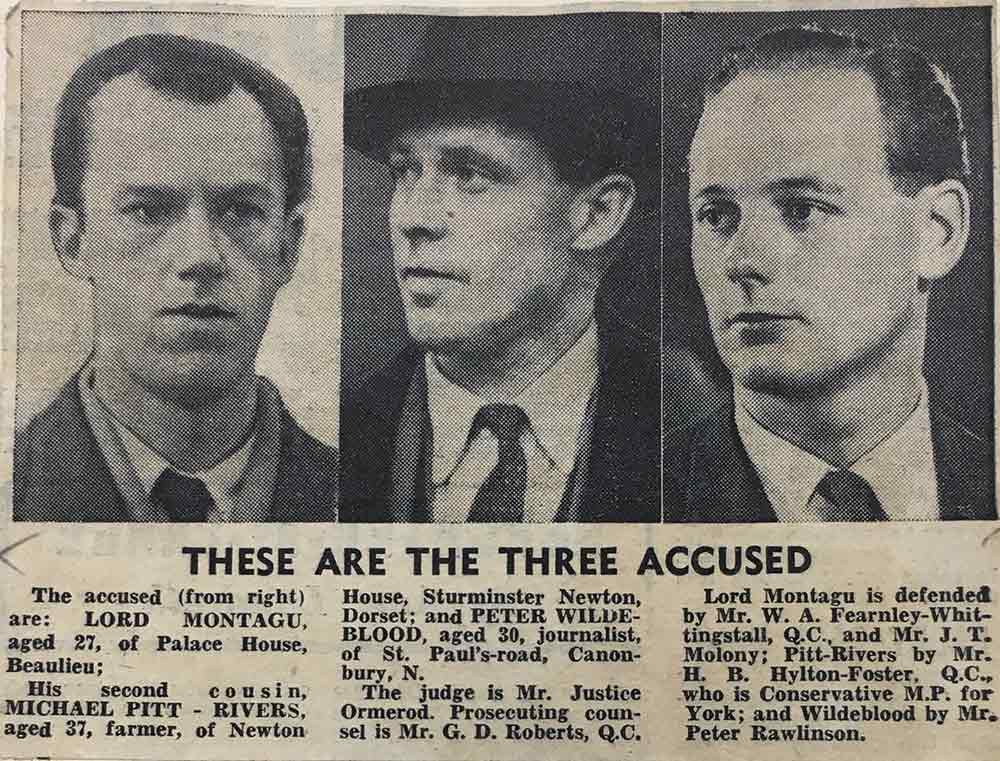 The Home Office wanted to review the laws relating to prostitution. Cabinet papers reflect that it was considered timely to also consider the laws pertaining to homosexual offences, in order to protect public morality and prevent further protrusion of perverse homosexual behaviour throughout British society.

After much debate, by April, the Cabinet decided to appoint the Departmental Committee on Homosexual Offences and Prostitution in order to assess the requirements for law reform. The committee’s leader, Lord Wolfenden, became its namesake. It sat for three years collating information to inform its recommendations. 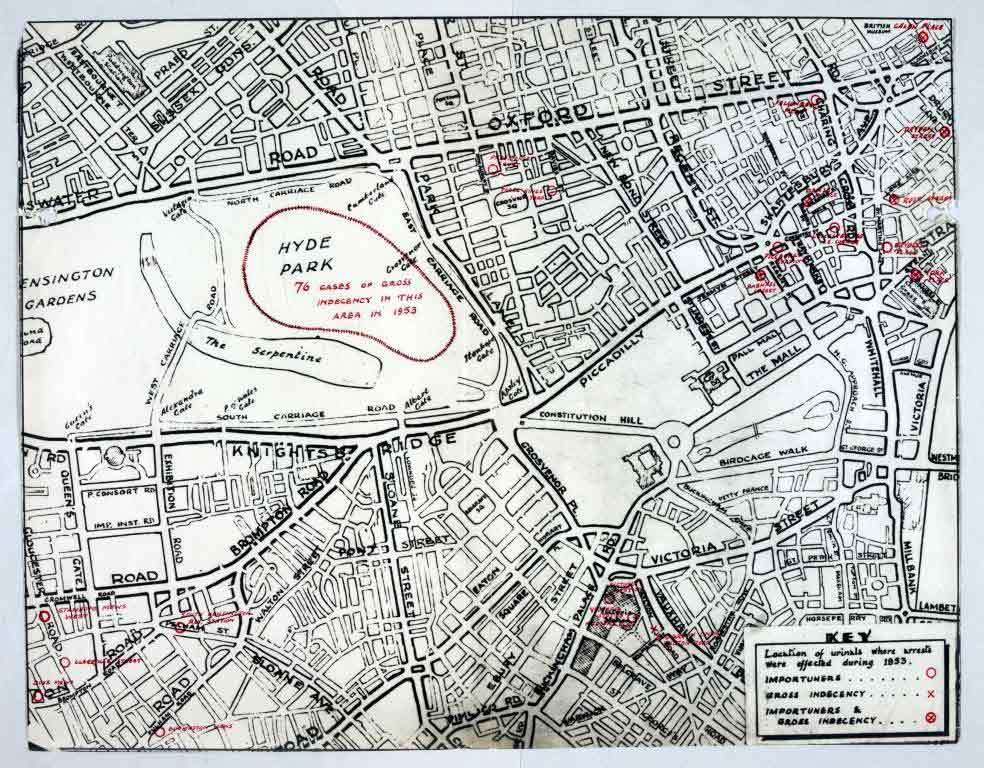 Map noting the locations of urinals in London where arrests were made during 1953. This was submitted as evidence to the Wolfenden Committee (catalogue reference: HO 345/7/3)

The recommendations were published in 1957, having found that there was a need to reform laws relating to both types of offence. The most prominent recommendation concerning homosexual offences was to decriminalize consensual homosexual relations between two men over the age of 21 in private. A copy of the report survives in The National Archives collections (HO 345/1).

The agreed-upon recommendations for prostitution were implemented within 18 months of the report’s publication but as you can see from the dates (1957 for the publication of Wolfenden’s findings; 1967 for the approbation of the Sexual Offences Act), it took ten years for the recommendations for homosexual law reform to be debated successfully and voted into law.

Reading between the lines of Cabinet Papers from 1954, it seems that the government did not expect for the committee to come to the conclusions that it did regarding homosexuality and homosexual offences, nor did they think that there was a need to reform homosexual offences legislation. 4

It would take a further ten years of campaigning until any of the Wolfenden Committee’s recommendations for the reform of homosexual offences were realised.