Following the end of the Second World War, the African continent underwent rapid decolonization as many countries gained their independence from European powers. In March 1957, Ghana (formerly the Gold Coast) became the first sub-Saharan African country to gain its independence from Britain. With the exception of Southern Rhodesia, Britain’s remaining colonies in Africa were all granted independence by 1968. The colonial possessions of France, Belgium and Portugal in Africa underwent similar transformations.

The rapid withdrawal of European powers from the continent created political instability and the emergence of rival factions and militias. The Soviet Union and the United States sought to exploit the power struggle in Africa by providing money, arms and political cover to friendly governments and political parties who promised to support them in the Cold War struggle.

As the Cold War intensified, both the Soviet Union and the United States sought to expand their influence within Africa by offering to support national liberation movements and providing much needed development aid and military assistance. The Soviets and their allies lent their support to a variety of Marxist national liberation movements with the West supporting anti-communist forces. 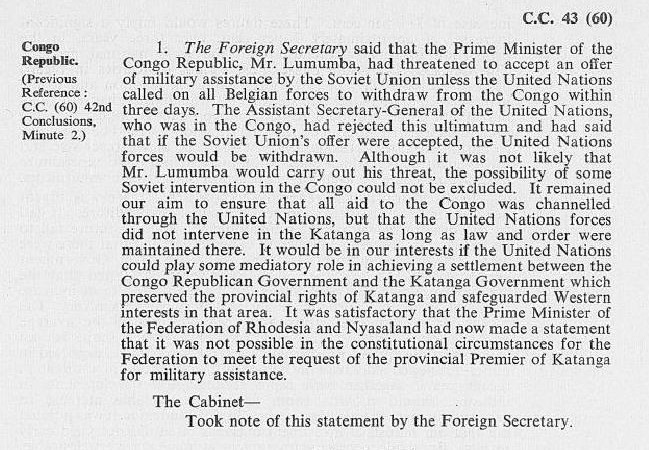 The Foreign Secretary voices his concerns over Soviet involvement in the Congo; catalogue ref: CAB 128/34/43

The provision of diplomatic and military aid allowed both sides to expand their influence in Africa at the expense of the other. The resultant conflicts, military coups and armed rebellions destabilised the region and led to the deaths of thousands of civilians due to famine, sickness and war.

One of the first battlegrounds was the Democratic Republic of Congo (formerly Zaire), which had been a Belgian territory since 1885. Life for the indigenous Congolese under Belgian rule was harsh, with many dying from poverty, sickness and hazardous working conditions. Resistance to Belgian rule began in the 1950s. A key role was played by the Mouvement National Congolais (MNC). Established in 1956, the MNC sought to transcend tribal allegiances and create a unitary and centralised Congolese nation. Its leader was Patrice Lumumba, who soon established the MNC as the most dominant party in the Belgian Congo.

In 1960 the Congo achieved independence, becoming the Republic of Congo-Léopoldville with Lumumba as Prime Minister. The new government sought to consolidate power and soon began to outlaw opposition parties and jail their leaders. This heavy-handed approach led to the secession of the mineral rich province of Katanga, under the leadership of Joseph Mobutu, the army chief of staff and staunch anti-communist. The central government in Leopoldville sought to crush the rebellion but was denied western support. Lumumba turned instead to the Soviet Union, who willingly supplied him with modern weapons, ammunition and military advisers. 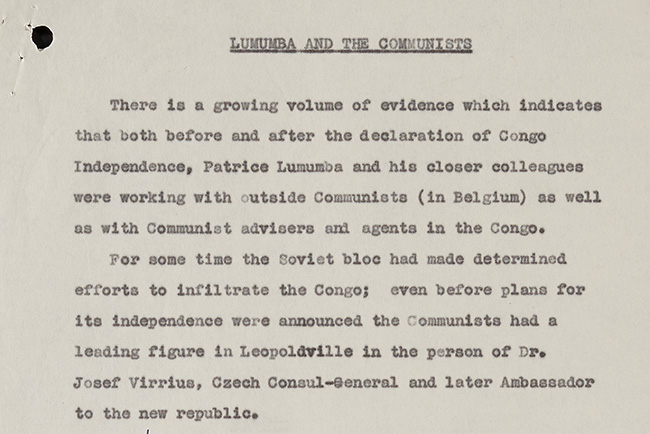 The involvement of Moscow worried officials in Washington who believed Lumumba was intent on turning the Congo into an African Cuba. This concern was intensified as the Congo contained the world’s largest deposits of uranium ore – some of which had been used in the atomic bomb detonated over Hiroshima. The Americans were determined to deny the Soviets access to the uranium mines and plotted with Mobutu to remove Lumumba from power. The Foreign Office also spread rumours that Lumumba was a dangerous communist in the pay of Moscow.

On 14 September 1960 Mobutu led a successful coup suspending Parliament and arresting Lumumba. The Soviets demanded his immediate release. They further called for the removal of UN peacekeeping forces from the country, and the detention and trial of Mobutu on charges of sedition and inciting the army to rebellion.

In January 1961 Lumumba and his key lieutenants were taken to Katanga, imprisoned and executed by firing squad. It was falsely reported that Lumumba and two other prisoners had escaped from prison. His death was finally announced over Katangan radio in February. The official communiqué stated that he had been killed by angry villagers after escaping from prison and threatening the inhabitants. 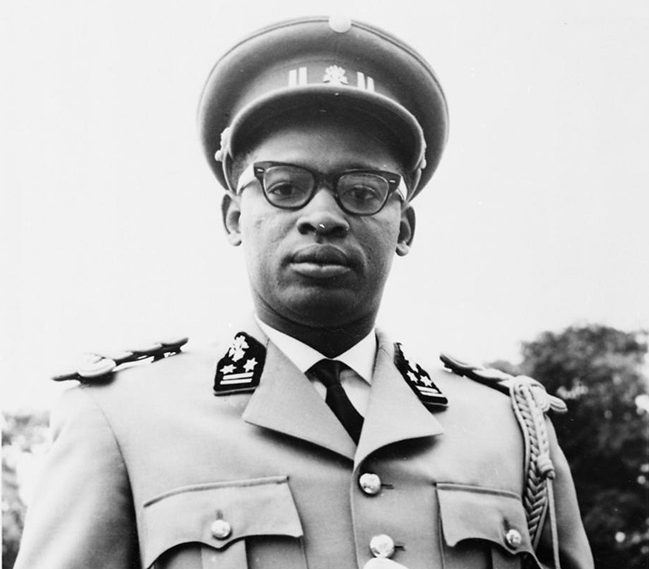 General Mobutu photographed on a visit to the UK; catalogue ref: FO 953_2207

The US continued to support Mobutu, who ruled the country, which remained firmly in the pro-western camp, until his death in 1997. It was speculated that the assassination of Lumumba was planned and carried out by western intelligence. In 1975 the US Senate found that, while the CIA had conspired to kill Lumumba, it was not directly involved in the murder. 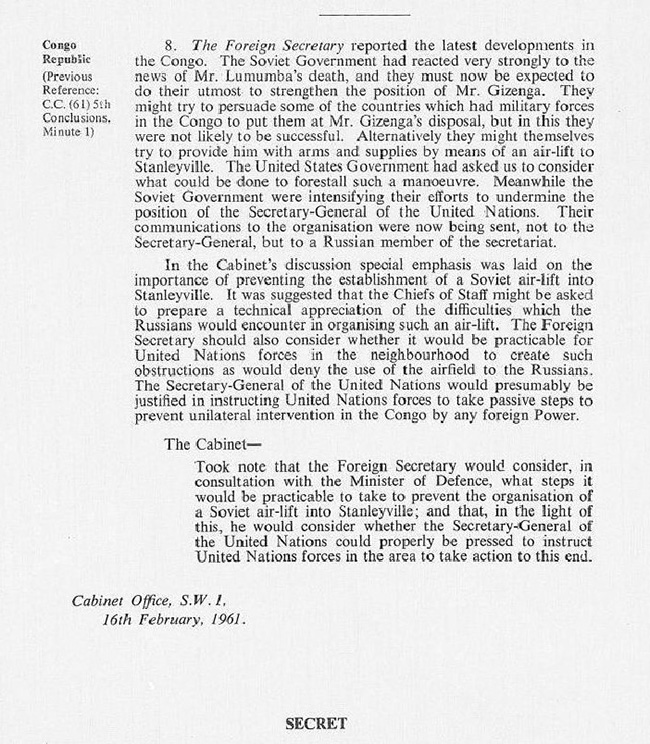 The British Cabinet are given news of Lumumba’s death and possible repercussions; catalogue ref: CAB 128/35/7

Lumumba’s death was also investigated by the Belgian authorities. The report published in 2001 concluded that although the Belgium government had not ordered his elimination, Lumumba’s execution was carried out by a firing squad led by a Belgian Captain. In February 2002 the Belgian government issued a formal apology to the Congolese people for involvement in the events that led to the death of Lumumba.

In the years after his death, Lumumba became a symbol of African liberation. Malcolm X proclaimed him the greatest black man who ever walked the African continent. Lumumba was later proclaimed a martyr and national hero of the Democratic Republic of Congo, with the site of his death designated a place of pilgrimage for all Congolese.