‘The Importance of Being an Innocent Bystander’

And so, England’s football team comes home. Sunday evening’s defeat in a penalty shootout at the European Championships in Ukraine followed a familiar trend where effort and determination were to the fore, but disappointment was the team’s ultimate reward. Out but not down; defeated but not beaten. 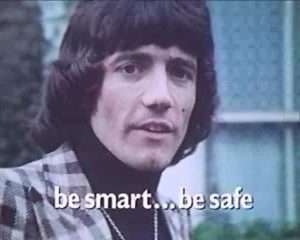 At least, they were not beaten in the sense alleged by a previous England tour to Eastern Europe 38 years ago. Then, in June 1974, the team arrived in Belgrade from Sofia to play the Yugoslav side in a friendly (following a 1-1 draw with East Germany and a 1-0 victory over Bulgaria) 1 but events at the airport – in what would become known as ‘the Keegan affair’ – led to some frantic diplomatic manoeuvring, the detail of which is available in a Foreign Office file available here at The National Archives (FCO 28/2657).

The allegation was as follows: following the team’s arrival at the airport on 2 June the players embarked on what an initial telegram from the Consular Department describes as ‘…mild fooling around including jumping over luggage transporter into non customs area.’  At that point local police arrived to tell the players to move to the correct area, but Kevin Keegan – one of Liverpool and England’s star players – refused and ‘…among other things told them to f off.’  At this point Keegan was taken away to be interrogated and returned 30 minutes later, with a bleeding nose.

The Ambassador Sir Dugald Stewart assured the players that the situation would be dealt with diplomatically, specifically by requesting a full investigation by Yugoslav officials, rather than immediately lodging an official protest. 2 By this point, however, the Yugoslavs had undertaken what they deemed to be a full investigation, apparently as soon as they realised they were dealing with an international footballer.

Indeed, the Yugoslav version of events spoke of the behaviour of a group of unidentified men (none of the English players were wearing any kind of ‘uniform’ that identified them as footballers – they would wear team blazers from then on – and their arrival time was incorrect due to a misunderstanding of the time difference between Sofia and Belgrade).  The report given by a Yugoslav official in a call to the Consular Department also mentioned Keegan’s ‘offensive manner’ – ‘he stuck out his tongue, slapped the arm of the official and used offensive language’ – and the two ‘clear infringements of the regulations’ that he had committed: ‘i.e.(i) that he had crossed the incoming customs zone into the area reserved for outgoing passengers and (ii) he had stepped on the conveyor belts, which is prohibited.’ Any allegation of rough treatment was denied and the official hoped that ‘…there would not be a “one-sided” version of the incident in the British press.’

One member of the British press corps in Belgrade was the correspondent for The Times, Geoffrey Green. Green was apparently an eyewitness to the events – one of the many complaints about the Yugoslav investigation was that no English eyewitnesses were interviewed – and he wrote of how Keegan was ‘sitting with his hand luggage when he and some others were hustled unceremoniously’ and how he was ‘manhandled and frog marched out of sight and into detention.’ Indeed, so adamant was he of Keegan’s innocence that he wished to re-title ‘the Keegan affair’ as ‘The Importance of Being an Innocent Bystander.’ 3

Ultimately, no Yugoslav apology was forthcoming and England’s players and Football Association, as well the Consular Department, agreed to let the incident pass. Indeed, Roy Hattersley – Minister of State for Foreign and Commonwealth Affairs in 1974 – answered a written parliamentary question on 13 June by stating ‘…it is the wish of all parties that the incident should be regarded as closed’.

As for the match, Green describes a thrilling 2-2 draw, with none other than Kevin Keegan scoring a late equalizer with a diving header. ‘Keegan, the centre of events earlier, played his heart out, collecting every stray ball for free kick or throw-in clearly to become a favourite of the crowd.’ 4 The final word on the matter, though, should go to Sir Dugald Stewart who spoke of how the incident was sparked by ‘high spirited larking about which was apparently misunderstood.’ And, interestingly: ‘I still shudder to think how it might have finished up if it had happened to a Scottish team.’ 5

As for me, I find the way in which some of the files in The National Archives’ collection offer a complete narrative on an incident very interesting: in this case right from the initial telegram reporting the events to a copy of Hattersley’s response to a parliamentary question. Furthermore, research here can often be supplemented by using other resources, such as The Times Digital Archive, which can allow for a number of different views of the same incident to be investigated. Finally, the image at the top of the page comes from the famous public information film from 1976 in which Keegan advises on more careful road crossing, with a simple caption from which we can all learn.