The centenary of the Women’s Suffrage Movement

2013 is the centenary of some of the most prominent events that happened in the name of the women’s suffrage movement. One of the most famous took place on 4 June 1913, when Emily Wilding Davison supposedly threw herself in front of King George V’s horse at The Derby in protest at the lack of women’s rights (read the anniversary blog post for an overview of the debate around her true motives and actions). We have some amazing documents held here at The National Archives on Emily Wilding Davison, which were recently filmed for the Channel 4 documentary Clare Balding’s Secrets of a Suffragette shown on Sunday 26 May 2013. 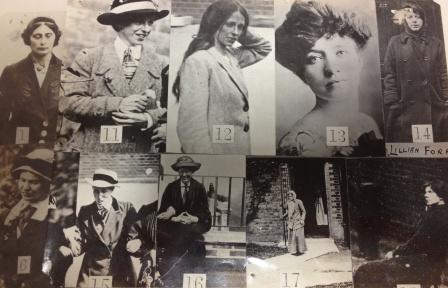 The story of Emily Wilding Davison, the first martyr in the name of women’s rights, will be preserved in history, but the suffragette movement was more than just the work of one woman. The many records held here at The National Archives are testament to the number of women that bravely fought for justice (a few of which are pictured right – catalogue ref: AR 1/528).

A game of cat and mouse

Another historic event in 1913 was the introduction of the Prisoners (Temporary Discharge for Ill Health) Act 1913, also known as the ‘Cat and Mouse Act’, owing to the way the government seemed to play with prisoners as a cat may with a captured mouse. The Act allowed temporary release, on licence, for suffragettes on hunger strike, until they were well enough to be rearrested and complete their sentence.

One of the lesser known suffragettes released under this act was Eileen Casey (sometimes referred to as Irene in the records) formerly of West Park Road, Kew, which some of you will have walked past on your way from Kew Gardens station to The National Archives. Eileen went to prison several times as a result of her actions in campaigning for women’s rights. Like Emily Wilding Davison, Eileen had a ‘royal encounter’ that resulted in her arrest and conviction for possessing explosives in Nottingham Market Square on 24 June 1914, the day King George V visited a factory in Nottingham’s Lace Market. That was just one year after Emily Wilding Davison threw herself in front of his horse at The Derby.

On the day I was researching the suffragette records, I was very fortunate to be asked for the file on Eileen Casey (catalogue ref: HO 144/1206/222067) by Document Services as it had been requested by a member of the public. That person was Sarah Laughton who was researching Eileen Casey, her great aunt, and she was keen to find out what my interest was in her ancestor.

Through my correspondence with Sarah, she told me about her research into her courageous great aunt Eileen:

‘I found the file [at The National Archives] absolutely fascinating. They included both the newspaper cuttings about her court appearances and the official documents about her arrests, hunger strike and force feeding…I have some truly dreadful verse written about this period of her life by a contemporary. When she was arrested for being in possession of explosives in 1914 she was sentenced to 15 months imprisonment but was luckily released with all the others when war was declared.’

Prior to her conviction for possessing explosives in 1914, Eileen had been arrested on 19 March 1912 for ‘damage’, was arrested a year later on 17 March 1913 for ‘placing noxious substances in a pillar box’ and convicted once again on 3 October 1913 for ‘setting fire to letters in letter box’.

In October 1913, Eileen was sentenced to three months in prison. During the first week of her imprisonment she went on hunger strike which resulted in ill health and led to force feeding. However, her fragile state – reported on 7 October 1913, only four days after her arrest – meant that the force feeding soon came to an end. On 9 October 1913, the Chief Constable of the prison received a letter ordering the release of Eileen Casey under the ‘Cat and Mouse Act’. It stated that if she failed to return to prison on 18 October 1913, she could be arrested without a warrant. Eileen didn’t return to prison then and avoided going back until 1914. 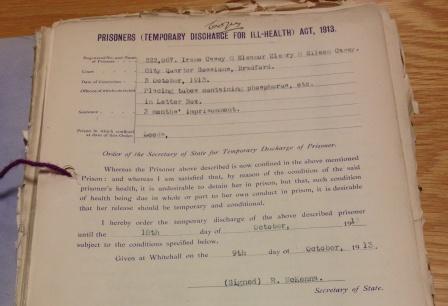 An explosive performance fit for a king

On 24 June 1914, Eileen left her lodgings with a green dressing box and paper-wrapped parcel and walked to Nottingham Market place where the royal visit by King George V was taking place. Police officers in the area noticed Eileen’s suspicious behaviour around the royal stand and questioned her at the scene about her activities and connections to other militant suffragettes. Eileen admitted to being Irene Casey, the militant suffragette of the same name who was wanted for not returning to Leeds Prison in October 1913. Detectives arrested Eileen and took her to Guildhall for further questioning where they found on her person 20ft of fuse wire, a detonator and five quarter-pounds of cheddite, along with other items as shown in this incredible list:

I think it would be fair to say that Eileen was a woman who liked to come prepared! Within the records are newspaper clippings about Eileen’s trial which took place on 26 June 1914, including one in the Nottingham Guardian, that notes her protestations where she is quoted as saying ‘This will go on until women get the vote!’ and ‘I hope I will be more dangerous before I finish!’. The article goes on to describe her ‘terrific struggle’, with no fewer than five officers in the dock upon announcement that she was to be remanded, providing some great insight into her character and the struggle, quite literally, to stand up for women’s rights.

As well as her great aunt Eileen, Sarah told me about the whole Casey family who lived in Kew and also supported the women’s suffragette movement:

‘Both Eileen’s mother (Isabella Casey (nee Reay)) and sister (Kathleen – Sarah’s grandmother) were arrested for offences connected with the suffragette movement; Eileen’s mother also spending time in prison. Her father, a doctor, was also a supporter of the suffrage cause and their home on West Park Road, very close to you at The National Archives, was a house that welcomed any suffragette known to Dr and Mrs Casey or not.’

I was struck by the courage of the whole Casey family in fighting for women’s rights and the amazing history we have on our doorstep. I was equally in awe of Sarah Laughton’s quest to research this piece of family history to pass on to her children so that it is not forgotten. Sarah and her children should be immensely proud of their ancestor Eileen and her strong determination to campaign for women’s rights even when it meant putting her life on the line.

According to Sarah’s research, Eileen went to Japan in 1923, following the death of her mother, where she taught English for a number of years. Eileen then moved to Australia at the outbreak of the Second World War where she became a translator (she spoke a number of European languages including Esperanto, as well as Japanese). She stayed on in Australia for some time and became the master of an Emulation Lodge (a Masonic lodge which had both men and women).

When she returned to England she lived in London and was a member of a committee ‘Calling all Women’. Eileen spent the end of her life in a nursing home near Sarah’s parents in Hampshire.

I am extremely grateful to Sarah Laughton for sharing this incredible piece of family history and for allowing me to use it, and her amazing photographs, in this blog post. I will always remember Eileen, especially when I am walking down West Park Road on my way to and from work, and her incredible actions as one of the many brave women that had the courage to stand up for women’s rights, which so many of us take for granted today.