Home > Blog > The bombing of the Café de Paris

The bombing of the Café de Paris

Plan of the Café de Paris, showing the effects of the bombing (reference: HO 193/68). The plan is shown laid out with weights to keep it flat.

Seventy-two years ago, on Saturday 8 March 1941, the Café de Paris, a London nightclub and restaurant was bombed during the Blitz. A 50 kg high-explosive bomb hit the building, on Coventry Street, at about 21.45. At least 34 people died and dozens more were seriously injured. 1 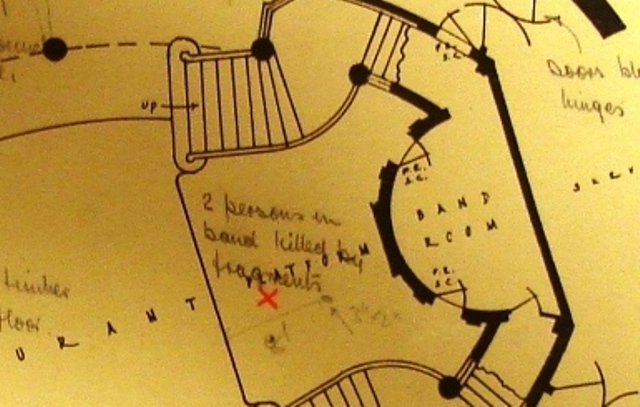 This detail from the plan shows where two members of the band were killed by fragments (reference: HO 193/68).

Before the war, the Café de Paris had been a very exclusive venue, but by 1941 entry prices had lowered and it was popular with a more mixed clientele, including service personnel on leave. 2 As it was still relatively early for a Saturday evening, the basement and ground floor areas were only half-full when the bomb fell. If it had struck the building an hour later, the Café would have been much busier and many more people would have died. 3

This was the most devastating incident during a night of heavy bombing. 4 It was recorded at both central and local levels of government and much of the official paperwork still survives in different archives. For instance, Westminster City Archives holds the local civil defence incident register and situation reports, 5 the city council’s Emergency Committee minutes, 6 and locally-produced maps. 7 Records at London Metropolitan Archives include the London County Council bomb damage map 8 and the London Fire Brigade Department’s situation reports. 9 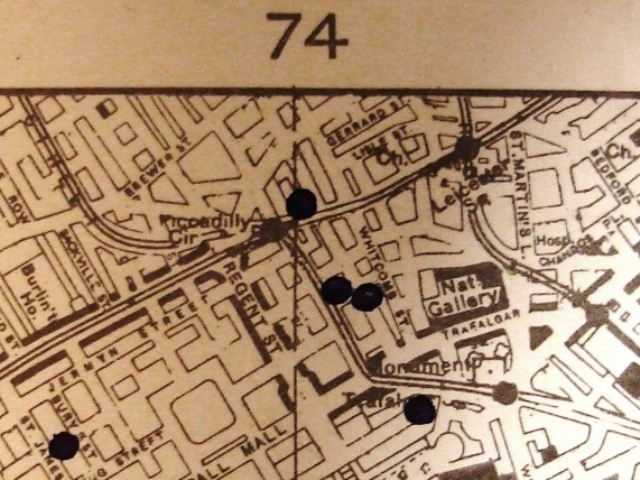 Here at The National Archives, we have central government records kept by the Ministry of Home Security. Those relating to this incident include the weekly Bomb Census map, and the associated ‘BC4’ reporting form, 10 as well as daily summary reports. 11 We also hold the detailed plan shown at the top of this post. 12 This plan is annotated in pencil to show the effects of the bomb, both on the structure of the building and on the people inside. The annotations agree with contemporary eyewitness accounts, which noted that while some of the survivors suffered terrible injuries, others escaped unharmed. Even some of the dead bodies were not visibly marked. 13

As with many bombing incidents, newspaper reports about the Café de Paris bomb were limited and rather one-sided. For instance, the report in The Times on the following Monday 14 was upbeat in tone. It highlighted the bravery shown by survivors and rescuers and made much of the fact that all of the cabaret dancers survived unharmed. In an attempt to prevent the German authorities from learning about the impact of the bombing campaign in detail, the building was not named, being referred to simply as ‘a restaurant’. It was almost a month later that a small article appeared naming the Café de Paris and hinting at the full extent of the casualties. 15 Similarly, a local newspaper report about recent air raids concentrated on how firewatchers had dealt promptly with lesser incidents. 16

This image, taken from BombSight.org, shows how heavily this part of London was bombed during the Blitz.

Other sources offer a less positive view about how the incident was handled, particularly with regard to the provision of medical care for injured survivors. Nurses from Charing Cross Hospital ran out of dressings and had to borrow some field dressings from the Scots Guards, who had been called in to stand outside the building. 17 A Mr Davis complained afterwards to the London Civil Defence Headquarters that too many ambulances had been sent to minor incidents on the same night, leaving too few available for the Café de Paris. However, the results of the ambulance service’s investigation suggested that his criticism was unfounded. 18

The Café de Paris remained closed for the rest of the war but reopened in 1948. 19 It is still open today.

Perhaps the best-known victim of the Café de Paris bombing was the musician Kenrick Johnson. Ken was born in what was then the colony of British Guiana (now known as Guyana) in 1914. 20 He came to the UK aged 14 because his parents, who had hoped that he would become a doctor, wanted him to have a British education. The passenger list for the SS Nickerie shows that he travelled alone, arriving at Plymouth on 31 August 1929. 21

Ken was more interested in music and dance than in medicine. After leaving school, he became a professional swing musician and was given the nickname Snakehips. As the band leader of the West Indian Dance Orchestra, he performed regularly at fashionable London venues, including the Café de Paris. At the time of his death, he was 26 years old, and at the height of his career. 22

A note written in the margin of the Café de Paris plan names Snakehips Johnson as one of the victims (reference: HO 193/68).

Afterwards, the story was told that Ken had spent the earlier part of the evening with friends at the Embassy Club. When he was unable to find a taxi to take him to perform at the Café de Paris, he decided to walk instead, ignoring his friends’ advice that that the heavy bombing expected that night made this too risky. He arrived at the Café only a few minutes before the bomb fell. 23

After Ken’s death, Mr Cummings, a civil servant in the Colonial Office’s Welfare Department, corresponded with Ken’s widowed mother, Annie, about his funeral arrangements and memorial. 24 In a letter dated 8 April 1942, Annie revealed her feelings about her son’s death: ‘… I am sure you can enter in my position in regards of having to write such sad letters about my dearly beloved son, truly with Ken’s passing it seems as if the last bit of light has gone out of my life.’ 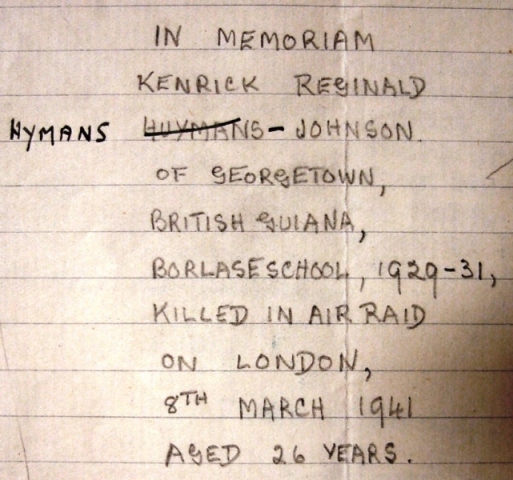 You can read more about Ken’s life and work on the following websites:

If you are interested in researching a bombing incident during the Second World War, you may find that a previous post on this blog and our research guide about the Bomb Census and related records are helpful places to start.