The Beatles – Big in Japan

It’s strange and surprising what can influence record research. Last week I turned on the radio, and subsequently have had a lyric stuck in my head (‘Half of what I say is meaningless,’ as sung by John Lennon in The Beatles’ ‘Julia’). For no other reason, I decided to delve into one of the records The National Archives has relating to the most famous band the world has ever seen. 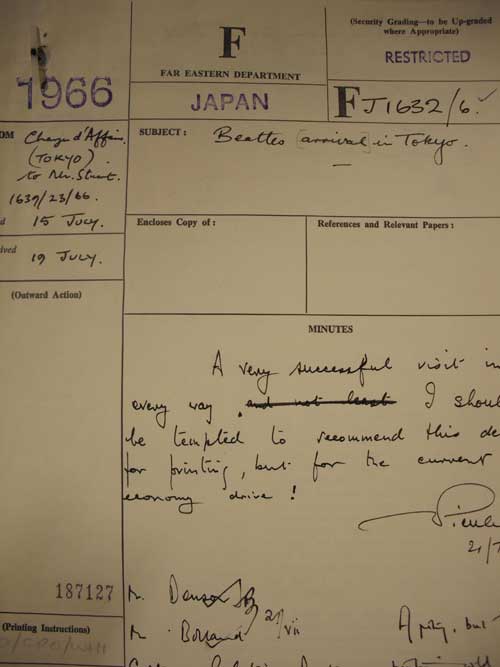 A search on our new catalogue, Discovery, provides a number of results for The Beatles, but one in particular catches the eye: the Foreign Office record referring to the band’s 1966 trip to Tokyo (FO 371/187127). 1

The band arrived in Japan at the end of June 1966 on the back of a storm. Alongside the wild Beatlemania which had spread across the globe in previous years, a tropical storm delayed their arrival in Tokyo for several hours.  The ‘Beatles typhoon’, as it was nicknamed, provides a neat metaphor for the band’s days in the city, as they arrived to perform five concerts in five days at the Budokan Arena.

The Foreign Office record contains a lengthy despatch from Dudley Cheke, Britain’s charge d’affairs in Tokyo, back to the department in London. Cheke describes how the group were ‘…a five days’ wonder’ and how ‘…a “Beatles mood” gripped the city.’  He spoke of how various Japanese officials had shown him ‘goodwill’ in order to try to obtain tickets and how the band’s visit may have ‘…given fresh impetus to the Japanese interest in modern British fashions which has been apparent for some time’.  Indeed, this is where I believe the particular interest of the file – and the trip itself – lies, as it comes at a seemingly defining moment for both Japan and for The Beatles themselves.

The preamble to the concerts was focused on protests by nationalists against the use of the Budokan – built to house traditional martial arts events at the 1964 Olympics – as a venue for a rock concert. Cheke reports that they believed the arena would be ‘desecrated’ and that they would ‘come out in force to protect it.’ He decided to leave security provision to the police, sponsors, and The Beatles’ manager Brian Epstein. Consequently, the band were more or less imprisoned in their hotel between performances, and forced to assume false identities in order to sneak out and view the city, with a huge police presence provided at the concerts. The nationalist argument was only subdued when the Chairman of the Executive Board of the Budokan, and a leading member of the Government Party, wrote an open letter arguing the respectability of the band was beyond doubt: ‘…the proof being,’ wrote Cheke, ‘that they had received decorations from Her Majesty the Queen’, referring to the MBEs recently awarded to the band members. 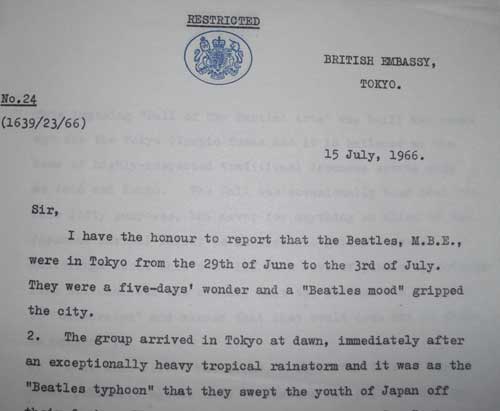 The despatch from Cheke to the Foreign Office

Nonetheless, opening up the Budokan to such a concert in a sense indicates a changing society. Subsequent performances in the arena by the likes of Deep Purple, Ozzy Osbourne, and Beyoncé would perhaps show that the initial concerns from traditional sections of Japanese society have either decreased, or become less influential.

Indeed, another indication of a changing Japanese society comes in a rather crass message, scribbled on a copy of Cheke’s despatch, by a Foreign Office official. Where others had written about what an interesting note it was, this official intimates his observation of a changing society – as well as perhaps the British Government’s own insularity – by writing, ‘[m]uch of Whitehall needs reminding that the Japanese are human, and that their way of life in 1966 is not that of 1936.’ In the decades between Japanese imperial militarism and its later economic and technological boom, perhaps we can view cultural exchanges such as The Beatles’ trip as a more important plank in rebuilding international relations, than one would initially consider.

As for The Beatles themselves, the visit to Tokyo came in between the recording and release of one of their definitive albums, ‘Revolver’. Following on from the previous year’s ‘Rubber Soul’ where the band enhanced their unparalleled songwriting ability with extraordinary harmonies and developed lyrical content, ‘Revolver’ demonstrated a level of innovation which must have surprised many.  From the politically-inspired lyrics of ‘Taxman’ and the string arrangements of ‘Eleanor Rigby’ to the taped loops of ‘Tomorrow Never Knows’ the album showed a band progressing from pop perfection to the legendary content which ensures they remain the group held in the highest regard today.

Which makes their performances at the Budokan all that more interesting. Playing some of their earlier songs, such as ‘Day Tripper’, the band must have felt a little like they were stepping back in time. 2  Furthermore, there was some disappointment in the length of time the band played for in each concert – 30 minutes exactly, with no encore – which Cheke believed was not value for money and did not, ‘…seem to compare at all well, for instance, with a whole evening’s recital by Rubenstein which could be heard last week in Tokyo for the same price; but it may be that this is just part of a Beatles’ ploy of playing “hard to get”.’

Whether they were ‘playing hard to get’ or not, the Beatles typhoon, and the file which describes it, gives an indication of a changing Japanese society; a band experiencing the positives and negatives of their extraordinary popularity; and a British Government slowly coming to terms with a new relationship with Japan and the international appeal of popular music.