The Battle of Kringen, 1612: uncovering an obscure Norwegian conflict 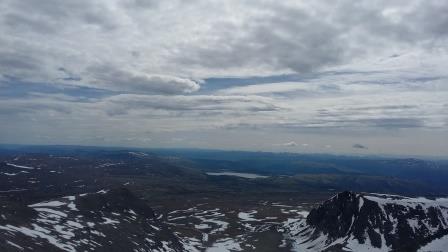 I was travelling through the town of Otta, about halfway on the route between the capital Oslo and the city of Trondheim, when a chance glance at my guide book revealed that I was close to the site where several hundred Scottish soldiers were ambushed by a force of local militia over 400 years ago. I was curious as to what on earth Scottish soldiers were doing in the deep valleys of central Norway in the year 1612.

A memorandum, dated 9 August 1612, from King James I’s secretary Sir Thomas Lake to Sir Robert Anstruther, ambassador to the court of the king of Denmark, appears to provide some explanation. Sir Thomas informed the ambassador that the King had, indeed by accident, heard that Scottish soldiers were being recruited for military service as mercenaries to the King of Sweden, who had been at war with Denmark since the previous year. 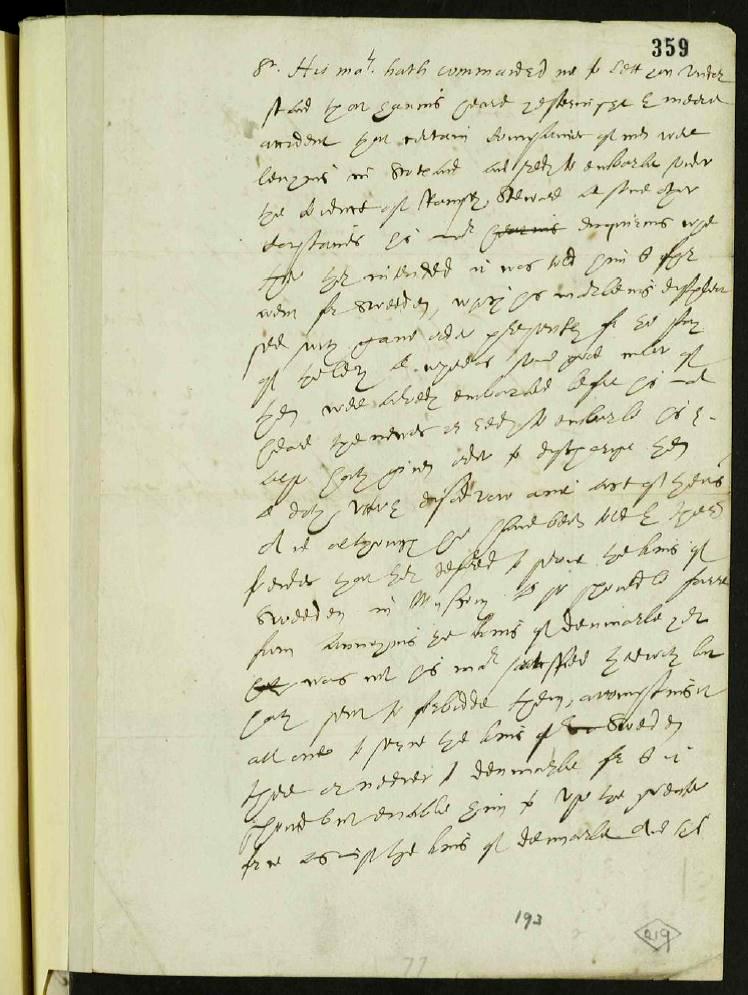 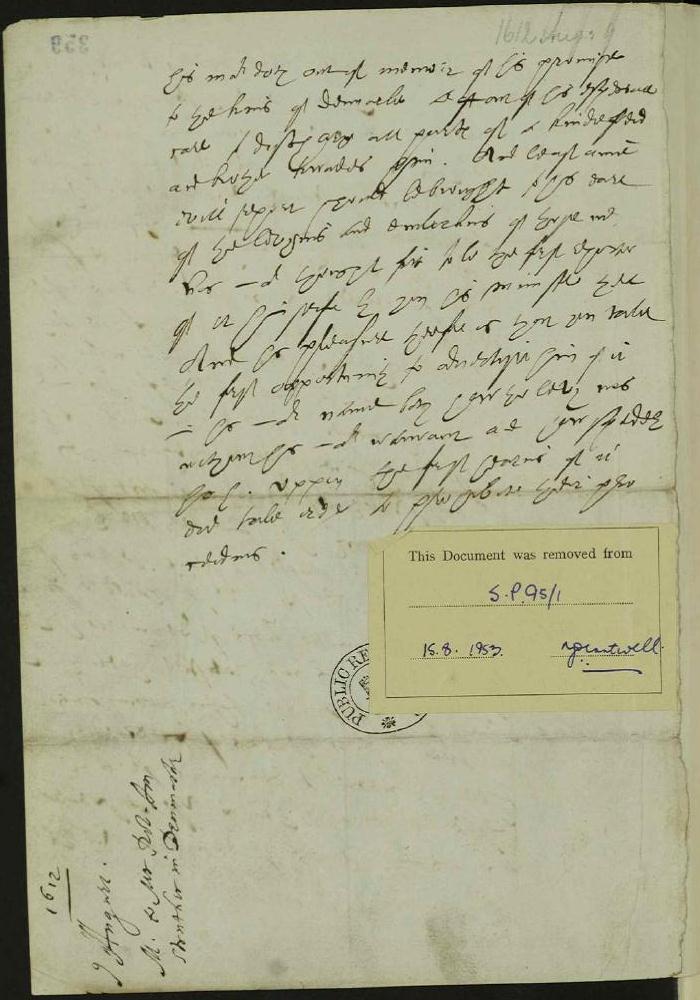 The problem for King James I was that he was brother-in-law to Christian IV of Denmark, having married his sister princess Anne in 1589. He had made strenuous efforts to develop and maintain amicable ties with his Danish counterpart. The memorandum reveals that King James was keen to proclaim his innocence in the matter, and that his ambassador should ‘take the first opportunity [to] advertise [to] him [the King of Denmark] of it in his ma[jes]ty’s name both how the levy was without his Ma[jes]ty’s warrant and how spe[e]dily his Highnes uppon the first hearing of it did take order to prohibit their proceeding.’

So who was recruiting Scottish mercenaries in defiance of royal policy and why? The person responsible is mentioned in passing in the memorandum as ‘Ramsey’. This was Colonel Andrew Ramsey, whose brother Sir James Ramsey was a favourite of King James. It was Andrew Ramsey who was commissioned to oversee the recruitment of a force of Scottish men for service in the armies of the King of Sweden in the summer of 1612, at a time of military hostility with the King of Denmark.

In spite of last minute royal efforts to prevent any troops leaving, a force of 300 soldiers under the command of Sir Andrew Ramsey’s younger brother Lieutenant Colonel Alexander Ramsay, successfully put to sea for the Norwegian coast. They intended to journey overland through the Norwegian hinterland to Sweden, rather than risk interception by Danish naval ships operating in the Baltic. 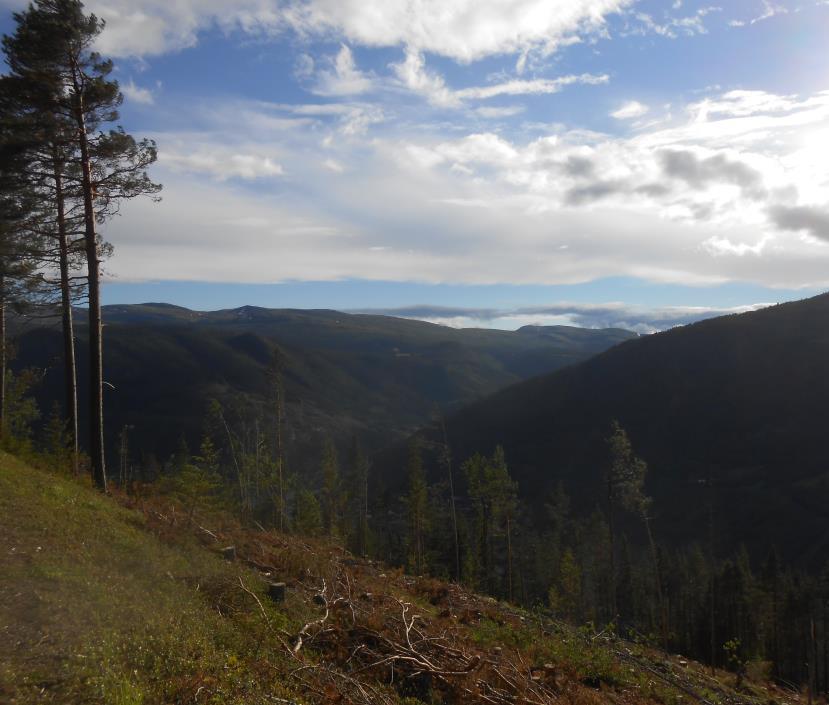 After landing on 19 August in an area of Romsdal fjord, their march took them up the fertile valley of Gudbrandsdalen, flanked on either side by steep sided fjalls (mountains). The route can be seen on the following map.

All seemed to be going well, with no significant threat to the expedition’s progress expected. However by 26 August, unbeknown to the Scottish commanders, a force of local farmers and militia had assembled, seeking to destroy these interlopers. According to Norwegian oral tradition a local women Pillar Guri is said to have played her horn as a signal for the Norwegian militia to attack. The hill on which she stood is to this day known as Pillarguritoppen adjacent to the modern town of Otta.

With the Scottish force trapped between the river and the steep sides of a defile, and with many not furnished adequately with arms, half of their forces were annihilated. Several officers and men were taken prisoner and many later killed. Four of the expedition’s leaders – Alexander Ramsey, Captain Bruce, James Monypenny and James Scott – were later taken to Denmark to be questioned at the Danish court.

The episode was officially relayed to King James I in a letter from the Danish King, dated 18 October 1612 and written in Latin, and several days later in a letter from James’ ambassador Anstruther. Both these letters are located in the State Paper volumes for Denmark in SP 75/5, with a transcription of the extract from the Ambassador’s letter to the King provided:

‘Doubtless your M[ajest]ie hath hard of that infortunat accident that hapned unto 300 of your m[ajest]is subjects which landed in Norroway, under the conduct of Alex[ande]r Ramsey (Lieutenant Colonell unto Coronel Ramsay) Captane Hay and Captane Sinclaire after they had marched six dayis within the cuntry pressing to goe through to Sweden, were overcharged by the inhabitants of the country and all killed except the said lieutenant Ramsey and captane Bruce, James Monypenny and James Scott these foure were sent to Denmark efter their coming hither a counsel of warre was called to have examined them and efterward to have given judgement upon them’ 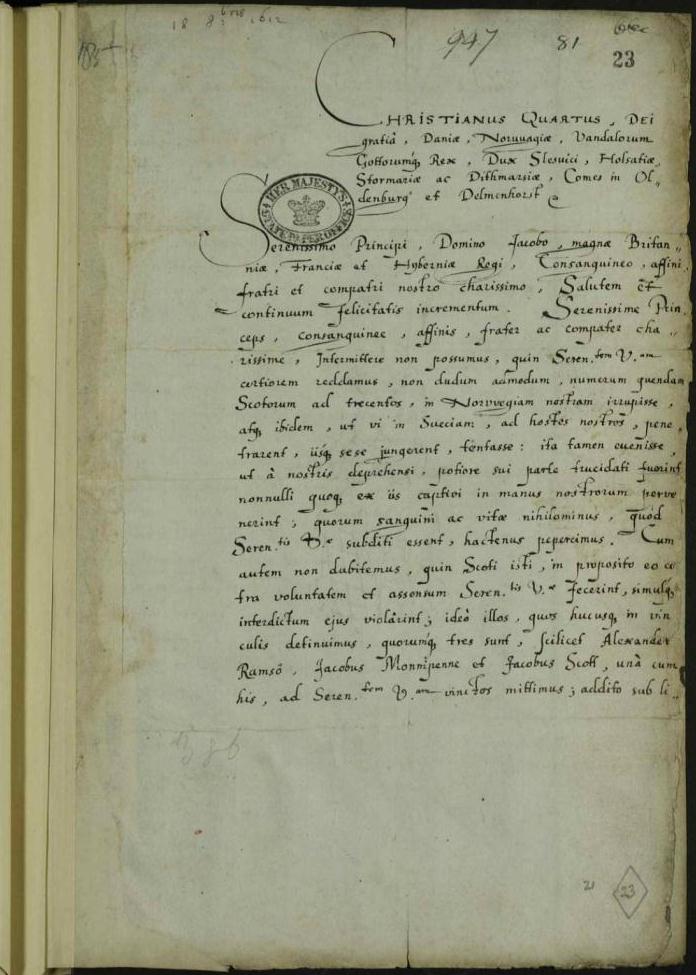 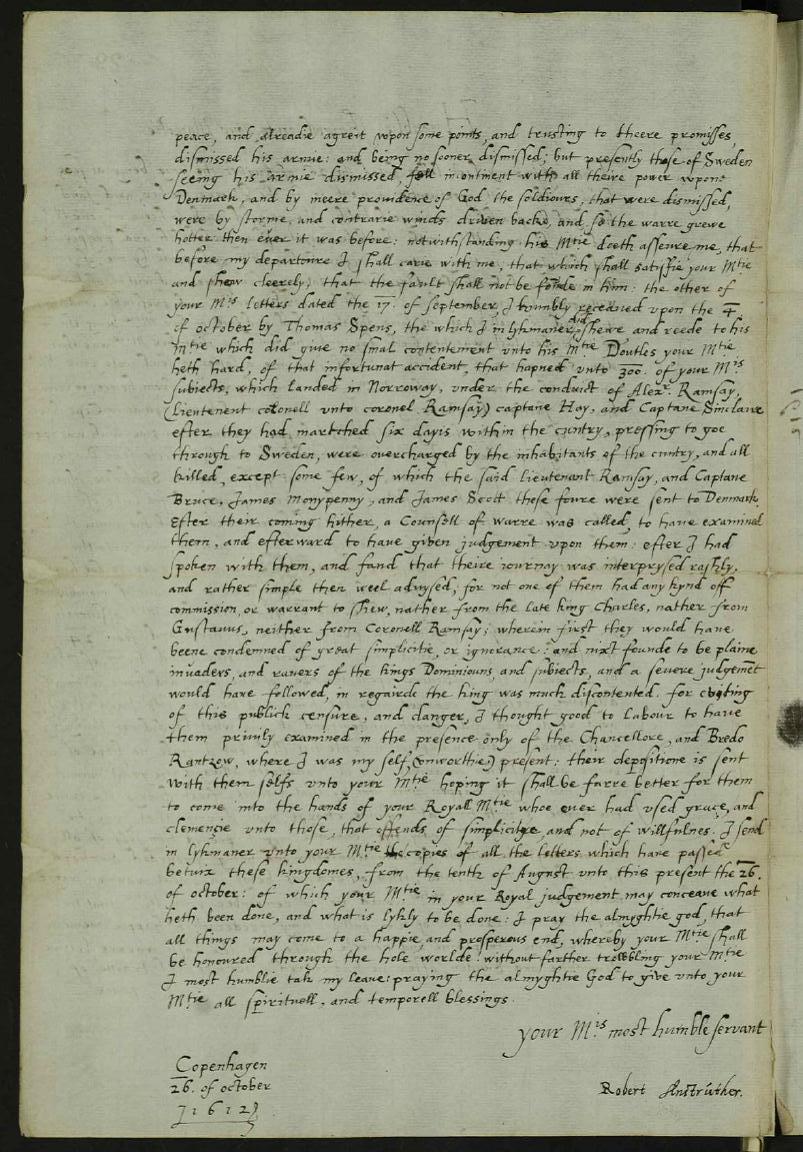 The examination referred to in Anstruther’s letter took place on 15 October 1612 and a copy summarising the proceedings is also preserved in the State paper records in SP 75/5, written in Latin.

In the examination Alexander Ramsay gives a brief account of his role in raising forces in Scotland, as well as the plan to link up and combine forces with the Flemish General Monnichofen and the Scottish General Halkett on Shetland. He defends his actions allegedly defying the King by stating that he had relied on the assurances of his brother Colonel Andrew Ramsay who was in charge of recruitment. 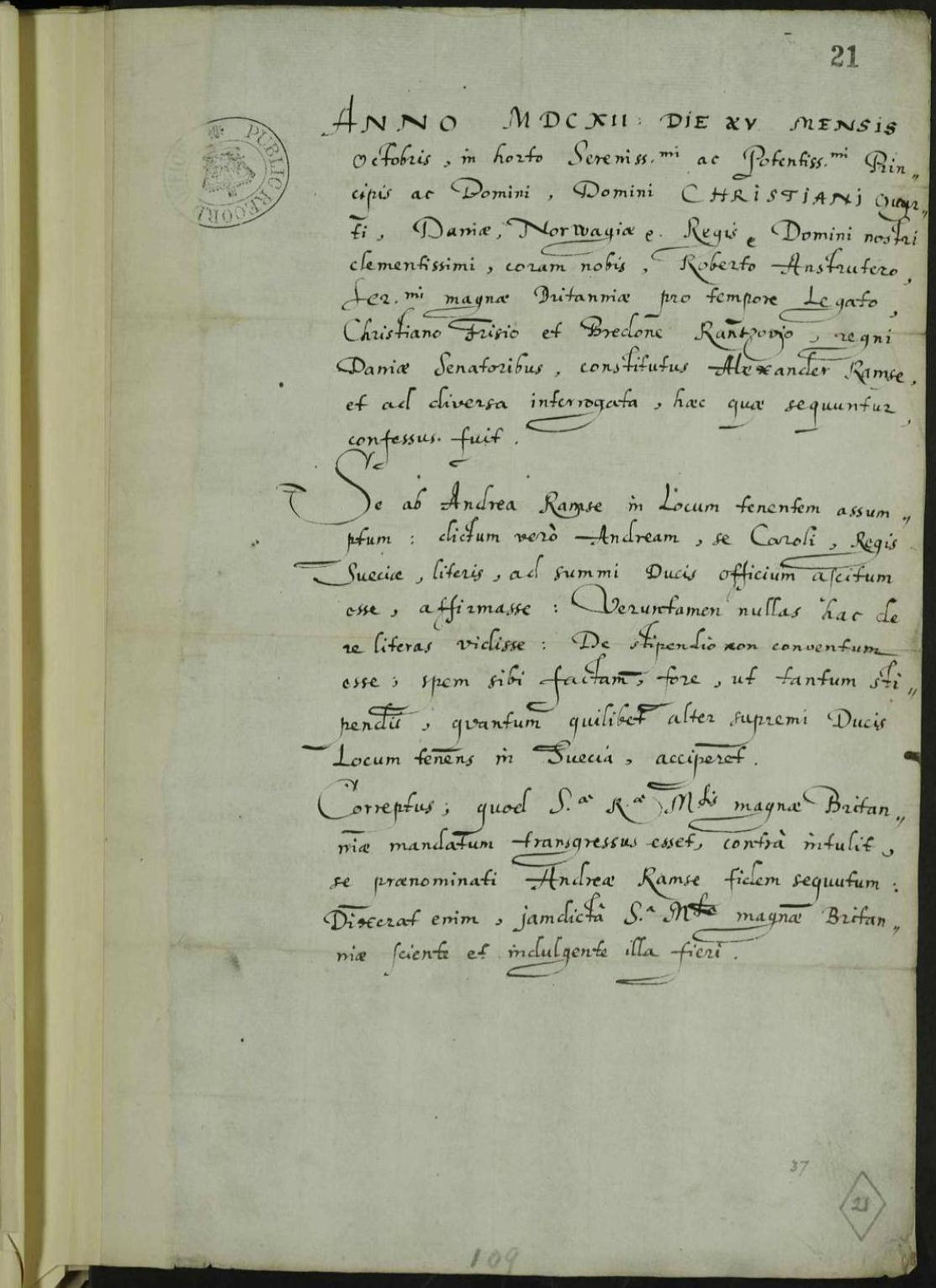 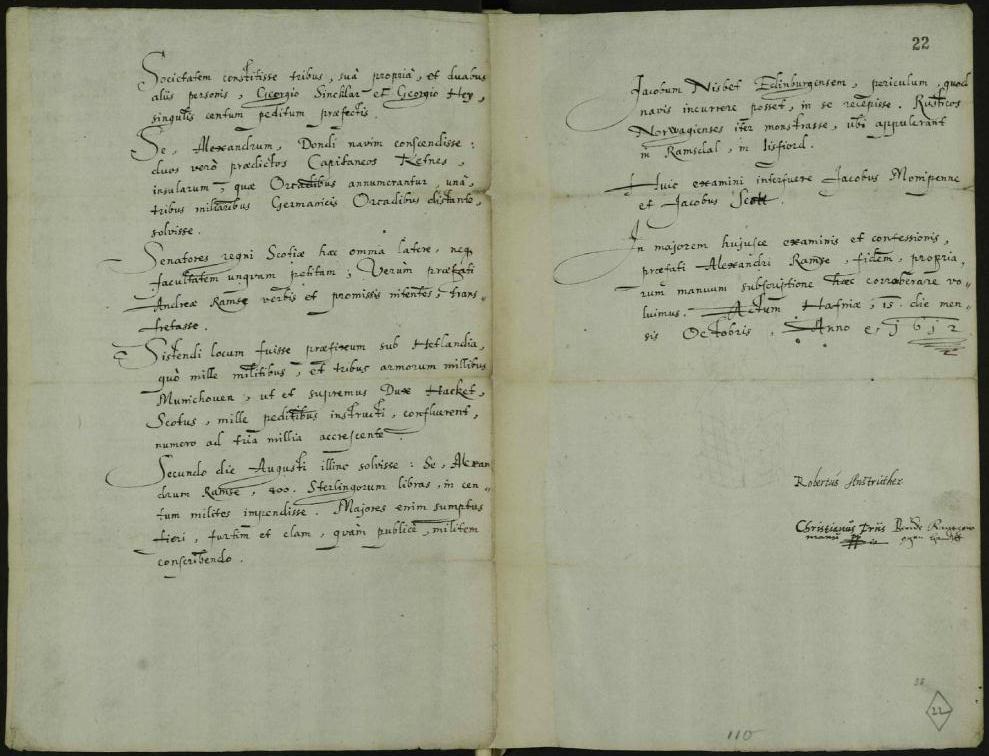 A second letter sent on 26 October by Sir Robert Anstruther to the king’s secretary reveals that the captured leaders were to be returned to England, no doubt to face questioning by royal officials. Their fate is known through a memorandum from King James I to Anstruther dated 21December 1612 (SP 75/5 ff.49-51):

‘As for the prisoners unto us you may say, finding them likewise no otherwise in fault than as abused by [Andrew] Ramsey. Wee have sent them home to their countrye.’ 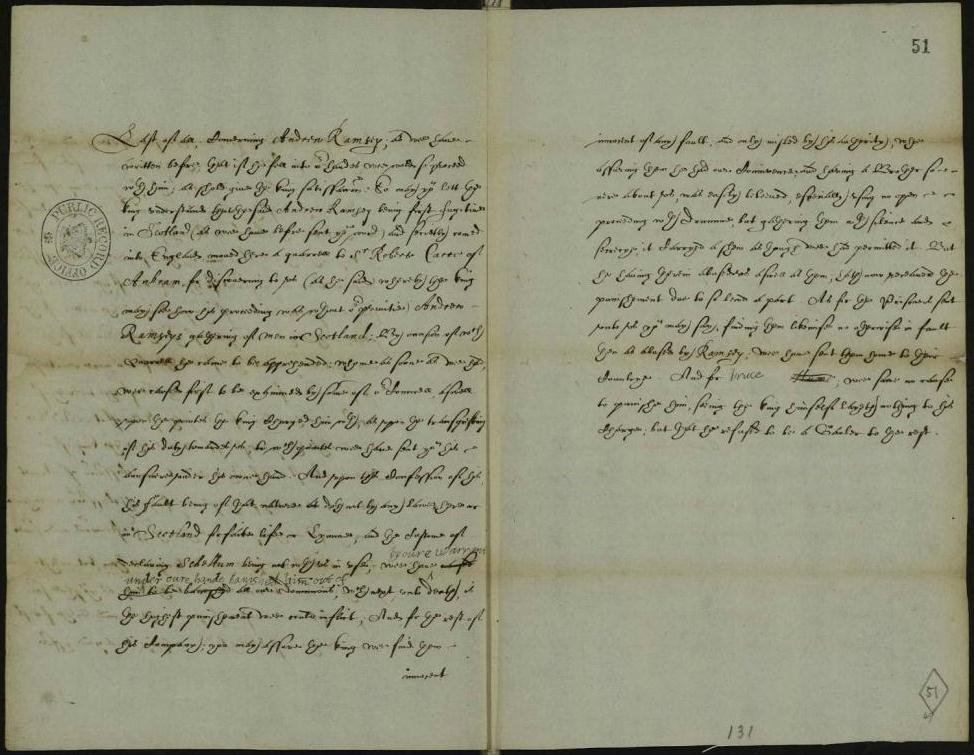 The dishonest Andrew Ramsay himself was not so fortunate: the same memorandum from King James to Anstruther reveals:

‘We have by oure warrant under oure hande banished him out of all oure dominions; w[hi]ch next unto death, is the highest punishment wee could inflict’

Thus concludes an episode in the chapters of 17th century British history that has been relatively forgotten but nonetheless deserves attention, as it was one of the only times in history that an army from the British Isles has landed on Norwegian shores until the outbreak of the Second World War.

These records all come from the State Papers Foreign series for Denmark covering the year 1612 in SP 75/5  accessible via State Papers Online at The National Archives. In addition, the majority of these records have been transcribed and translated in Thomas Michael’s book The History of the Scottish Expedition to Norway in 1612, available online.