The assassination of Spencer Perceval

The only British Prime Minister to have been assassinated was Spencer Perceval, and The National Archives has marked the 200th anniversary of this event, which occurred on 11 May 1812, by digitising two key documents about the murder: 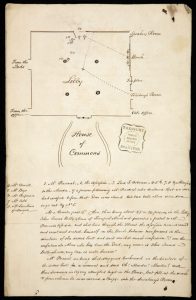 Among the papers of the Treasury Solicitor is a fascinating plan showing the House of Commons lobby which is where the assassination occurred. It shows all the ‘key players’ at 17:15 on 11 May 1812 by means of a coded system – circle no 1 is Spencer Perceval, having just entered the lobby, and circle No 2 is the assassin, John Bellingham, a merchant from Liverpool with an obsessive grievance against the government. This plan, which is part of the trial papers for John Bellingham, looks strangely ‘modern’ in a sense. Dotted lines show the routes that the assassin took immediately after shooting Perceval at point-blank range: Bellingham returned to the bench where he had been lying in wait earlier, making no attempt to escape.

The dotted line for Perceval purports to show his movements on being shot, vividly described in the account which is given below the plan:

‘Mr Perceval on being shot staggered backward in the direction of the dotted line for a moment and said “Oh! Murder! Murder!” And then advancing in agony attempted to get in the House, but fell at the mark + from whence he was he was carried a corpse into the Secretary’s Room.’

When I saw this document the thought occurred to me that I was looking at a 19th century British equivalent of the familiar plans of Dealey Plaza in downtown Dallas, Texas (the site of J F Kennedy’s assassination on 22 November 1963) showing all the key landmarks such as the Texas School Book Depository and the ‘Grassy Knoll’ and all the angles with regard to the origins of gunshots. Only, in this case, there was never any controversy or dispute about the fact that there was a sole gunman – there were several witnesses to the event (some 25-30 persons were in the lobby at the time). However, historical documents demonstrate that conspiracy theories are nothing new.

‘Compensation for his misfortunes’

Bellingham, a merchant trader, had visited Russia in 1804 on a business trip, but ended up being imprisoned for five years for an alleged debt. He protested his innocence and made several appeals for assistance to Lord Granville Leveson-Gower, the British Ambassador in St Petersburg. But Leveson-Gower’s response, essentially, was that he was unable to interfere in the matter. By the time Bellingham was released in 1809, he had become consumed with the cause of righting the injustices he had suffered. He returned to England and bombarded Whitehall with petitions, seeking compensation for his misfortunes, but received the ‘brush-off’. His frustration and sense of grievance reached a point when he could only see one solution – he decided to kill the Prime Minister.

The National Archives holds the papers of Lord Granville Leveson-Gower (who later received the title Earl Granville) in the series PRO 30/29. One of the documents we have digitised, PRO 30/29/6/11, contains a letter addressed to Leveson-Gower, dated 24 May 1812 which begins: ‘My Lord…dreadfully are you deceiv’d in thinking Bellingham had no accomplice’. The writer clearly wants to get a conspiracy theory ‘bandwagon’ underway. The letter concludes with this chilling threat: ‘Beware the fate which waited Caesar on the ides of March your fate is decreed therefore prepare for death’. It is signed ‘One of the fifty…Brutus’. One can only imagine the effect of such a powerful letter on Lord Granville and the authorities in general. It is all the more sinister for being written in a learned hand. There are at least two other letters within the file attacking Lord Granville, one from ‘a sincere Espouser of the cause of Bellingham…Globe Tavern, May 25 ‘12’ and another dated 25 July in which the writer challenges Lord Granville to a duel on Primrose Hill.

Signal for the English Revolution?

This was a febrile time in British history. As Denis Gray has written in his Biography of Spencer Perceval, ‘there were many on that night of 11 May who thought that Perceval’s assassination was the signal for the English Revolution’. Britain was engaged in war with France and this was placing a heavy burden on the people – wheat prices soared in 1812 due to the disruption to trade caused by the war. There were allegations of corruption in high places and a growing clamour for parliamentary reform. The Luddites were wrecking the new mechanised looms which were being introduced in the wool and cotton industries. This movement had begun in Nottinghamshire in 1811 and quickly spread throughout the country. There was a real fear, in fashionable society, that mob rule could break out at any moment. A sympathetic writer to Lord Granville on 13 May was appalled by the fact that some of the populace had been nosily rejoicing at the news of the assassination. Troops had to be called out to enable Bellingham to be transported from Westminster to Newgate Prison (it was feared that a mob was trying to help him escape).

Given all these factors, one can see why many in ‘high society’ held suspicions for a time that Perceval’s murder was part of a conspiracy which could lead to revolution. However, Bellingham was tried, found guilty and executed within a week of the murder, and the manic atmosphere surrounding the case abated. Over time, the name John Bellingham (and indeed, that of Spencer Perceval) largely disappeared from public consciousness. The documents we have digitised bring this highly dramatic episode of British history back to life. They also show how archives can enable us to reflect differently on phenomena which we might be tempted to think of as ‘modern’ – such as the lone gunman who assassinates the leader of a country. The plan of the lobby showing events at 17:15 on 11 May 1812 prompts us to think about wider historical perspectives.