Set cookie preferences
Home > Blog > The Archbishops of York and the North of England, 1304-1405

February 2019 saw the start of a major collaborative research project between The National Archives and the University of York, funded by the Arts and Humanities Research Council. ‘The Northern Way’ project, headed by principal investigator Professor Sarah Rees Jones (University of York) and co-investigator Dr Paul Dryburgh (The National Archives), examines the lives, careers and activities of the 14th-century archbishops of York, predominantly through documents held at the Borthwick Institute for Archives in York and also here at Kew.

Two full-time research assistants at York (Helen Watt and Dr Marianne Wilson) are indexing the registers of the archbishops, which survived largely complete for the whole of the century, and are freely available.

Meanwhile, I am working at Kew, locating, studying, indexing and describing documents from across The National Archives’ collections, showing the interaction between the archiepiscopal administration and the royal government, and the roles of the archbishops and other members of the northern clergy within the major organs of the medieval state.

Images of the registers of the York archbishops have been available for a few years via the Borthwick Institute’s website, following a generous grant from the Andrew W Mellon Foundation. Some registers have already been indexed to varying degrees as parts of previous projects. However, this project aims to provide indexes to all the registers covering the period between the election of Archbishop William Greenfield in 1304, and the downfall and execution of Archbishop Richard Scrope in 1405.

In between, these registers cover the careers of a variety of archbishops of very differing characters and reputations, from the relatively little-known William de la Zouche (1342-52) and Robert Waldby (1396-7), through men of national political and administrative importance such as William Melton (1317-40) and Thomas Arundel (1388-96, and later archbishop of Canterbury) 1, to the more controversial figures of Scrope, executed following his unsuccessful rebellion against Henry IV 2, and Alexander Neville (1374-88), who was deposed from office and supposedly ended his life serving as a parish priest in the city of Leuven in Brabant.

These archbishops also ranged from aristocrats such as Arundel, Neville and Scrope, to men like Greenfield and Melton, of much more lowly origins. Work on indexing the registers has begun in earnest, and new content is being added continually. To access the indexes, click here.

The registers’ contents are extremely diverse, relating to a wide range of different subjects. They include relatively run-of-the-mill yet vital church activities such as the appointment of new parish clergy, the registering of wills and the administration of the archiepiscopal estates, to correspondence with the monarch, other high-ranking members of the northern and southern clergy, and, of course, with the pope and the papal curia.

The 14th century saw an array of major national and international events, many of which are reflected in the registers and which the project aims to examine, such as the Black Death, the Avignon Papacy and the Western Schism, the on-going wars with France and Scotland, and the political instability surrounding the reigns of both Edward II and Richard II.

But the registers also contain huge amounts of local entries, such as the incident involving the ‘renegade’ nun Joan of Leeds, the subject of an earlier blog post by Paul Dryburgh. They also document the piety, beliefs and religious life of the time – the most well-known example being the so-called ‘Lay Folks Catechism’, a set of instructions designed to educate parish clergy in order for them to better tend to the needs of their parishioners. The text, contained within the register of Archbishop Thoresby, circulated widely among both clergy and lay people, and is notable for being written in English rather than the more usual Latin. 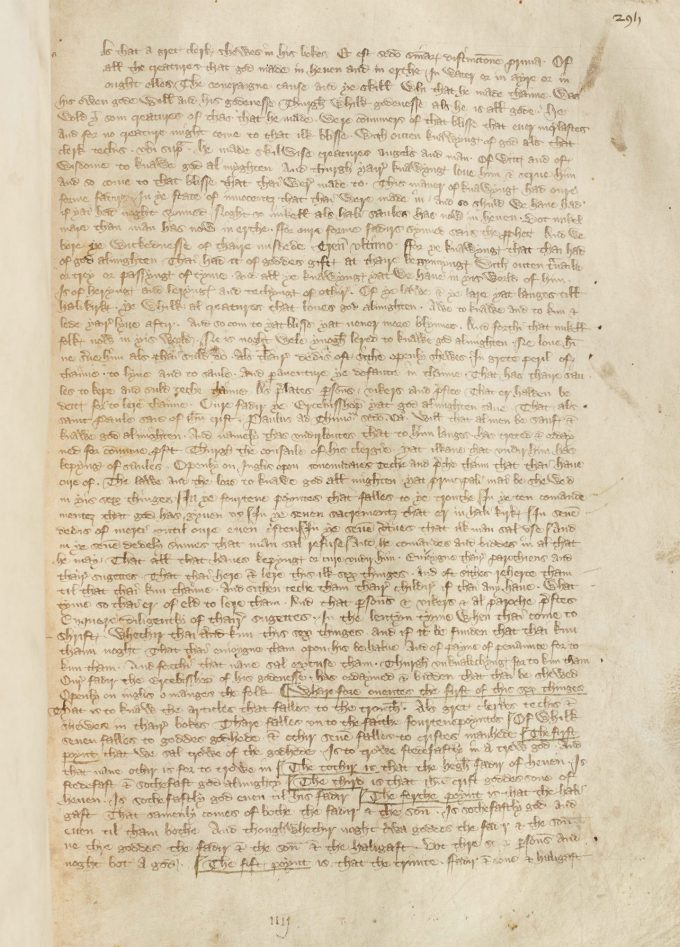 ‘Lay Folks Catechism’, a set of instructions designed to educate parish clergy in order for them to better tend to the needs of their parishioners. Catalogue reference: BIA Register 11, fol. 295r

Our research at The National Archives is intended to complement and build on the contents of the archbishops’ registers, and to allow research into particular aspects of the lives and careers of the archbishops. It is an opportunity to examine how the administration of the northern province interacted with the royal government, and whether there was a specific ‘northern’ agenda to that relationship. It will enable us to investigate how, as previous historians have shown, the personnel of various state bodies such as the Chancery and the Exchequer came to be staffed by so many clerics with northern origins and backgrounds 3.

We will survey certain series comprehensively, adding details and summaries to the project database that will be searchable alongside the registers, and we will sample and survey many others, looking into particular events and individuals.

So far, work has concentrated on three major series. The significations of excommunications (C 85) comprise requests for royal assistance in arresting and bringing to account people excommunicated by the church authorities for breaches of religious rules, such as the non-payment of tithes, defamation, breach of marriage and sexual misconduct and irreligious incursions upon sacred spaces. These usually involved orders to the county sheriffs to arrest the wrongdoers and hand them over for punishment; the series often included instructions to countermand such orders, once the person concerned had made amends or sworn to their innocence.

The York documents rarely indicate the offence concerned, but some can be traced through other material, such as the archbishops’ registers themselves, the York Cause Papers or other government records such as Ancient Petitions (SC 8) or the rolls of local judicial bodies (JUST 1, KB 9). Some can be extremely detailed, such as the one shown below, which lists the names and titles of the monks of the Cistercian abbey of Rufford in Nottinghamshire in 1314. 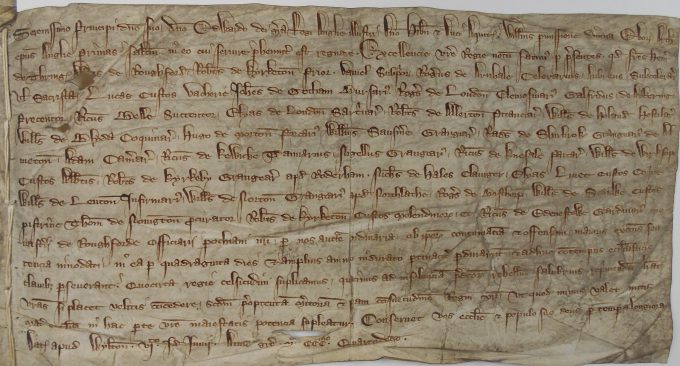 We have also examined the small series of clerical petitions (C 84), the majority of which deal with the election and confirmation of new abbots and priors. While relatively standard, these documents again show clearly how the ecclesiastical and royal administrations worked together in particular activities, and include documents such as those below, a decorated request for the confirmation of the election of a new abbot of St Mary’s Abbey in York in 1382. 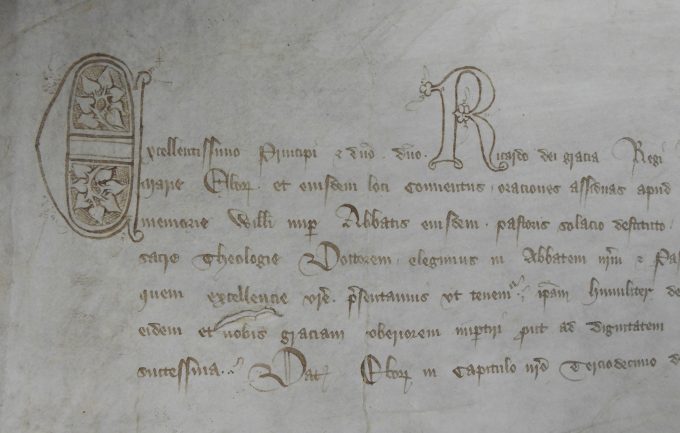 Request for the confirmation of the election of a new abbot of St Mary’s Abbey in York in 1382. Catalogue reference: TNA C 84/32/49

Another document is the presentation of the next prior of Lenton in Nottinghamshire from 1376, signed by the sender, Jacques de Cozan. He was the abbot of Cluny, the great monastery near Lyons in what is now eastern France.

Presentation of the next prior of Lenton in Nottinghamshire from 1376, signed by the sender, Jacques de Cozan. Catalogue reference: TNA C 84/31/42

We’ve also examined relevant material among the Ancient Correspondence (SC 1), that huge collection of miscellaneous letters and related material, mostly to and from the Crown and its ministers but also between a huge variety of other individuals. Among these we have particularly noted this letter from around 1307-8 from the clerk of Archbishop Greenfield to the Treasurer of York, Walter de Bedwyn, sending him some ‘mediocre’ table knives on the archbishop’s behalf and apologising to his colleague for their poor quality.

Letter from the clerk of Archbishop Greenfield to the Treasurer of York, Walter de Bedwyn. Catalogue reference: TNA SC 1/49/138

We will now be turning our attention to other records, such as the incomparable Ancient Petitions series (SC 8) – fully searchable by person, place, subject and document type on Discovery; the Ecclesiastical Certiorari (C 269), returns to the Crown from church authorities concerning a variety of business; and the Ecclesiastical Miscellanea (C 270), all of which promise to provide rich sources for our study.

Further material is always coming to light, with relevance on both a local and national scale, and this will feed into a guide to sources for the study of the northern Church at The National Archives, which will be published at the end of the project.

As well as producing a number of books and articles based on the records, the project will be taking part in a variety of lectures, seminars, workshops and conferences over the next two years, at events across the country, including here at Kew. These events start in earnest in the autumn, with a series of lectures in Yorkshire commemorating the 700th anniversary of the ‘Chapter of Myton’, a battle which took place at the village of Myton-on-Swale on 20 September 1319 between an invading Scottish army and a hastily-assembled English force led by Archbishop Melton. The battle, one of the less-celebrated events of the Scottish Wars of Independence, was a resounding victory for the Scots, over an English ‘army’ with few experienced soldiers and comprised largely of volunteers and men in holy orders obeying their archbishop’s call to defend his cathedral city.

Further details of project events will appear in due course, but in the meantime the team would be delighted to hear from anyone interested in the project and its work. Enquiries can be made via the project website, and you can also follow us on Twitter @tnorthernway.

Dr Jonathan Mackman is a Research Associate on ‘The Northern Way’ project.