Textured backgrounds, animated clipart and many, many colours – UK Central Government websites in the late 1990s

In this post I plan to take you on a trip back through history to a time when Tony Blair had been Prime Minister for just six months, Gordon Brown was Chancellor of the Exchequer and ‘The Teletubbies say “Eh-Oh”‘ was at the top of the UK singles chart. Yes, I am describing the year 1997. I’m aware that 1997 is not long ago in relation to some of the records held at The National Archives, but as my colleague Mark Merifield explained in his recent post, the last few decades have seen drastic changes in the way that public records are produced. A majority of records are now digital and many are made available through the internet.

I work as part of the Web Continuity Team and we are responsible for archiving the websites of UK Central Government departments. The first departmental websites were launched in the mid-1990s just as general use of the internet began to take off. As government use of the internet increased, The National Archives recognised that valuable information was at risk of being lost and in 2003 we began a programme of archiving websites. We worked with the Internet Archive, a US based non-profit organisation which had started archiving websites from around the world as early as 1996. Fortunately for us the Internet Archive had archived several early UK Central Government websites. Some of these early archived versions are now available through the UK Government Web Archive.

One of my favourite examples is this instance of the HM Treasury website which was archived in December 1997. 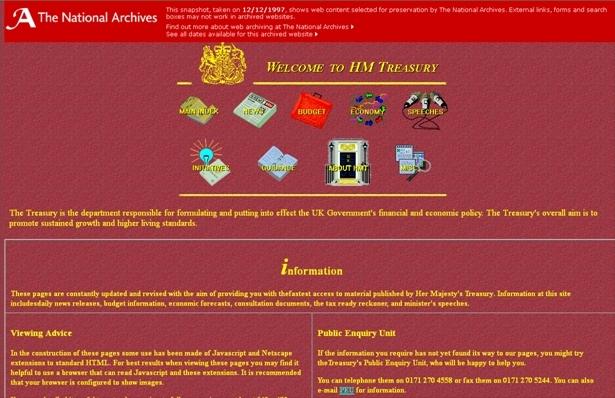 Viewing the earliest captures in the archive is like a step down memory lane for me. I’m transported back to the dark days of dial up and having to wait through 10 minutes of strange noises while the modem dialled several phone numbers before finally connecting to the web. Then after all that having to disconnect a few minutes later because someone else in the house needed to use the phone!

The primary reason that The National Archives decided to archive websites was to capture information that may otherwise be lost, especially as organisations began to move towards e only publication (publishing information online rather than on paper). An additional benefit of the archiving programme is that the context is captured as well as the information itself. In the case of HM Treasury it is possible to trace the design of the website through from the clipart (I love the image of the Number 10 door) and brightly coloured textured backgrounds of 1997 to the most recent capture which took place in December 2011.

Since 2003 we have archived over 2,000 different websites (many on multiple occasions) and collected over 80 Terabytes of data. We continue to archive around 150 websites per month according to a regular schedule. The UK Government Web Archive is accessible free of charge to anyone with access to the internet through a web browser.

Archiving a new medium such as the internet is difficult. As archivists our job is to capture information which is produced. We cannot dictate how it is produced or in what format.   Early archived versions are often incomplete but as web archiving technology has improved the quality of archived websites has increased dramatically. With a few exceptions, such as database driven content, forms and search boxes, a majority of content contained in archived websites should work just as it did on the live site.

The internet has changed many aspects of our lives over the past two decades. We hope that through web archiving this small selection of the UK web estate we have made a valuable contribution to recording the development of the internet in this country as well as capturing public records we are required to preserve by law.

By the way – the 1997 version of the HM-Treasury website looks great when viewed on my smart phone.

You might also be interested in viewing these other early archived versions in the UK Government Web Archive:

Department for Culture, Media and Sport – May 1998

We would love to hear any memories anyone has about using or working on early UK Central Government websites.