This is my third blog post on Operation Remorse, the secret Second World War operation that earned millions for Britain. You can read the first post and the second post here. Between 1942 and 1943, the Allies tried to smuggle rubber from Japanese-occupied territories, through ‘Operation Mickleham’. Crippled by difficulties over exchange rates in China, the operation never produced an ounce of rubber. Apparently, it was a ‘partial success’. 1 Still, it wasn’t all bad. Though it couldn’t smuggle rubber, Operation Mickleham had real benefits: talented officers, experience of China, goodwill and connections in commercial circles – everything a successful racket needed. The problem was that official exchange rates wasted its funds.

‘The screens of our stage’: curtains for Mickleham

A letter cancelling Mickleham. A note at the bottom says ‘This isn’t the end. Of that I’m quite certain.’ Catalogue reference: HS 1/289.

‘The screens of our stage consist of depreciation, inflation, hedging in other currencies or commodities, usury and rackets. All acting is done behind the scenes, the audience sees nothing.’ (HS 1/289, 30 Sept. 1943, p. 4).

Mickleham’s ‘masked’ transactions could fund all the British organisations in China. The vision was tempting, and convincing. But SOE were also convinced that, although the team was ideal for the work, Mickleham as an operation had no part left to play. Oliver Lyttelton, Minister of Production responsible for Mickleham, agreed – black market finance needed a new scheme.

‘Some people live on that’: setting up Remorse

Despite Mickleham’s failure, there was cautious optimism. As Desmond Morton (Churchill’s personal assistant) said, ‘It is hot stuff, but so is curry and some people live on that.’ (HS 1/291, 18 Jan. 1944) The British in China were about to live on Remorse. Working under SOE and the Treasury, Remorse planned to profit from the conditions that sunk Mickleham. Using black market exchange rates, Remorse could buy several times more Chinese National Dollars (CND) than official rates offered. The extra money would fund British organisations in China.

A message illustrating the difference Remorse could make to British expenditure in China. Catalogue reference: HS 1/291.

Remorse pretended to be the same thing as Mickleham, ‘to deceive only those who ought to be deceived’ (HS 1/291, 28 Dec. 1943) – including Britain’s allies. Remorse also began to trade in quinine for SOE. It could be, as Morton said, ‘turned to various jobs as the mission demands’. In these early days, the mission demanded staff. Fletcher returned to China in January 1944, with a six-month deadline, but SOE left Remorse with a skeleton staff, mostly ex-Mickleham. They even took Fletcher’s assistant, John Newhouse. Fletcher scrawled a complaint about the shortage in longhand, since Remorse didn’t even have a secretary (as late as March), signing himself ‘Yours, rather disillusioned’ (HS 1/291, 22 Mar. 1944). 2

‘The appetite improves with the eating’

A.D.S. Anderson (‘B/B.310’), the accountant sent by John Venner (head of SOE finance), arrived in April, and not a minute too soon – running a racket in China threatened ‘many accountancy headaches’. The British Secret Intelligence Service (SIS – aka MI6) was an almost lethal headache. Though Remorse was sending payments as planned, SIS complained. By cutting Remorse out of the picture and manipulating currency themselves in the same markets, they could make £10,000 extra per year. They didn’t want to deal with Remorse. Anderson frostily called this ‘criticism from uninformed’ – Remorse saved much more than SIS could make, and treated clients well (HS 7/261, p. 667). Fletcher complained to Venner, ‘S.I.S are unbelievably dangerous here…If [only] they would use their brains against the enemy instead of us!!’ (HS 1/291, 4 Apr. 1944)

They were more dangerous than Fletcher knew. An operative openly approached Frank Shu, a rich Chinese businessman and Remorse contact, asking him to sidestep Remorse and deal with SIS directly. SIS insisted that Remorse would have to put up with competition – oh, and fund SIS when needed, besides. There was uproar. Fletcher wouldn’t give SIS a penny while they blundered about, breaching security on Remorse’s patch. The dangers were too great. Since Remorse went on to deliver 14,000,000 CND to SIS between April and July, it seems the argument must have gone Remorse’s way. (HS 1/135)

While there was danger, there was also opportunity. The Treasury wanted all British organisations to sell sterling and rupee cheques on Chinese markets for CND – ‘the appetite improves with the eating’, they claimed (HS 1/292, 2 Jan. 1946, p. 3). Fletcher and Davis suggested an alternative. A free-for-all would undermine both security and exchange rates – instead, Remorse could sell the cheques for CND and the money earned would be distributed to British banks in China as needed. This was approved, despite Treasury worries about ‘canalisation’. (HS 7/261, pp. 707-709, 753-756)

Remorse had been handed the keys to the kingdom.

‘A man of no importance’: Edward Wharton-Tigar

Remorse was rapidly adding strings to its bow. Valuables like diamonds could be sold for a tidy sum – or used to bribe Chinese officials. 3 For this sensitive work, Remorse employed one remarkable individual in late May 1944. Edward Wharton-Tigar (‘G/B.2500’), an accountant for the mining company Selection Trust, had worked for SOE in Tangier since 1941, running all sorts of operations involving currency work and subversion. In a daring act, he destroyed a German infrared spy station there. 4 With a brilliant mathematical mind and self-confessed ‘collector’s mania’, he was an ideal addition to an operation bent on ‘collecting’ huge amounts of money. As it happens, Wharton-Tigar’s ‘mania’ was for cigarette cards: his collection remains the largest in the world, and in homage I’ve created a few cigarette cards based on Remorse personnel, adapted from their Personal Files. 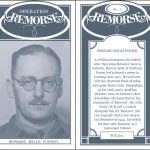 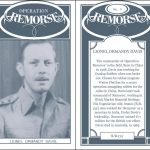 A mock ‘Cigarette Card’, front and back, for Lionel Davis, commander of ‘Remorse’ in the field. Adapted from HS 9/403/6. 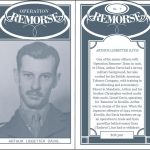 Valuable stones had been used in Tangier to store value, and they (and other valuables) could do the same in China. 5 Wharton-Tigar got to work quickly on making aquisitions and sales in these valuables. From out of the file (HS 1/291), the details strike like thunderbolts:

One of Remorse’s main aims, it was claimed, was ‘to keep the British foot within the Chinese door’ (HS 1/291, 26 Jun. 1944). Looking at its great success, we might say Remorse kicked that door down. In a future entry, I hope to look at Remorse’s wealthy and important Chinese agent, Frank Shu, and how Remorse worked, and played, in China.