Home > Blog > Uncovering a sad tale of murder and suicide

Uncovering a sad tale of murder and suicide

The note said: ‘This was probably written just before Mrs Farnham murdered her children and committed suicide.’

Underneath this, in Mrs Farnham’s handwriting, it said: ‘Dear Sir, I return this cheque as I do not require any more assistance from this Institution.’

I challenge anyone finding a note like this to simply close the book and go to lunch. I wanted to know more. 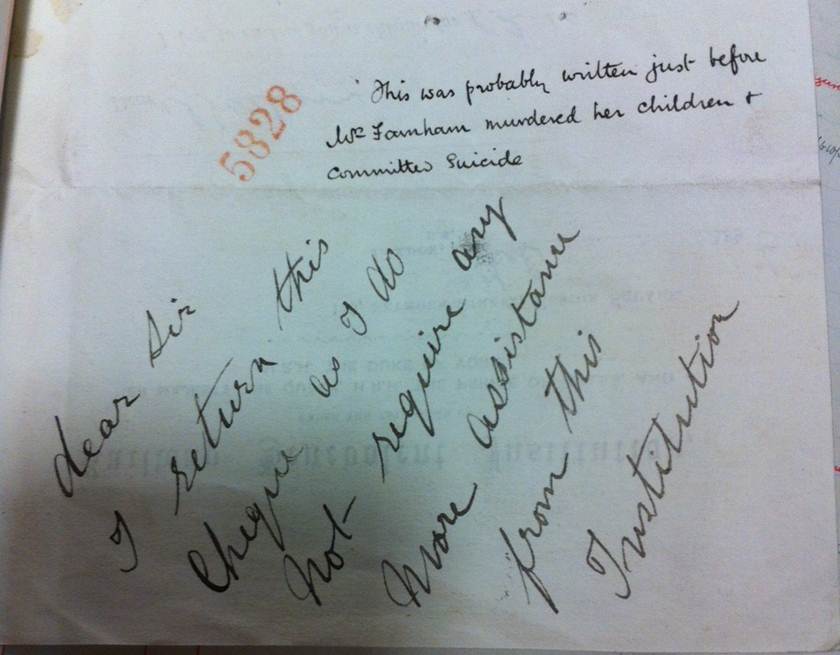 The note was tucked into a volume of payments made by the Railway Benevolent Institution (RBI) to widows and orphans of railway men killed or injured on the railway, held here at The National Archives under reference RAIL 1166. The RBI was founded by a group of railway clerks in May 1858, and still continues today under the name The Railway Benevolent Fund.

So why was Mrs Farnham receiving payments from the RBI, and why did she commit such a terrible crime?

The RBI volume included an entry for her, stating that her husband, Henry Farnham had been a porter and station master at Takeley Station, Bishops Stortford, on the Great Eastern Railway. He had died in 1893, leaving his wife, Mary Jane, with five children to support. 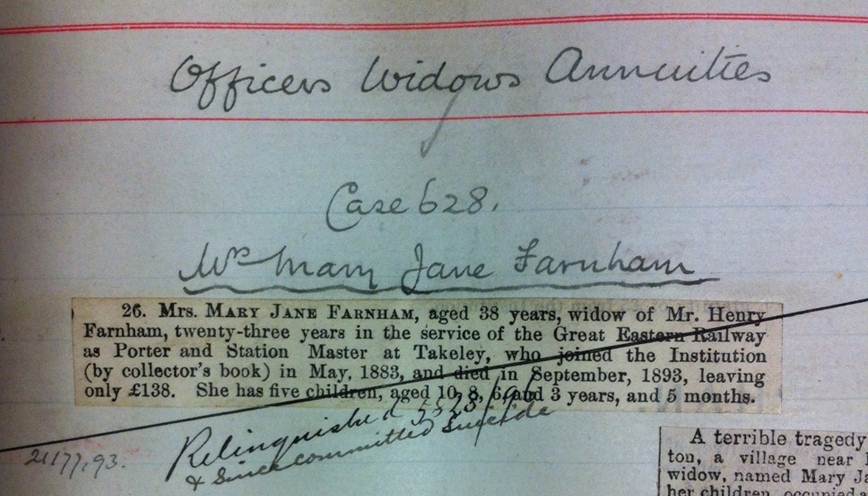 According to the census, birth and marriage records, Henry Farnham was born in Audley End in 1852. His future wife Mary Jane Peacock was born at Upwell, Cambridgeshire, in 1855.

In 1871 Henry was a Railway Porter at Stonea Station in the parish of Wimblington, close to where Mary Jane grew up, and they married in North Witchford , Cambridgeshire, in 1877. By 1881 Henry had become Station Master at Takeley, where he remained until he died. He was buried in Takeley churchyard on 10 September 1893, aged 41. Their five children were all baptised at Takeley Church.

Also included in the RBI volume was a press cutting from the Daily Telegraph dated 20 February 1896, which described how the police had broken into Mrs Farnham’s cottage only to find her body and those of four of her children.

This was not a spur-of-the-moment attack. Mrs Farnham had planned the murder of her children and her own suicide. She had made sure that her debts were paid. The police found £3 10 shillings in a sealed envelope, labelled ‘Mrs Fishers Rent’. And on the previous Saturday night her eldest daughter had been sent to the baker’s shop to pay for two loaves of bread, although it had always been Mrs Farnham’s routine to pay on Wednesdays when the baker’s cart came round. Her neighbours reported that Mary Farnham had become very distressed at times, and she had often commented on the fact she had been left with five young children.

Henry Farnham had died two years earlier after a prolonged illness of acute congestion of the lungs. He was much liked and respected, and friends and neighbours collected £70 for the family when he died. Mrs Farnham had found it very difficult to cope without him, although she was not hard up financially.

At the inquest the jury returned a verdict that Mrs Farnham murdered her four children and committed suicide while temporarily insane.

The funeral took place at Wimblington churchyard, and I would like to thank The Fisher Parkinson Trust for permission to use their photograph of the funeral below. The family were interred in a double grave: Mrs Farnham was laid by the side of the two younger girls, and the bodies of the boy and the second girl were placed above.

Thousands of people from March and the surrounding district attended the funeral, including the family’s eldest daughter and sole survivor, Lucilla, who was away in service at the time of the tragedy; the greatest compassion was felt for her. She was heartbroken, but placed emblems composed of snowdrops on each coffin as it was lowered into the grave. 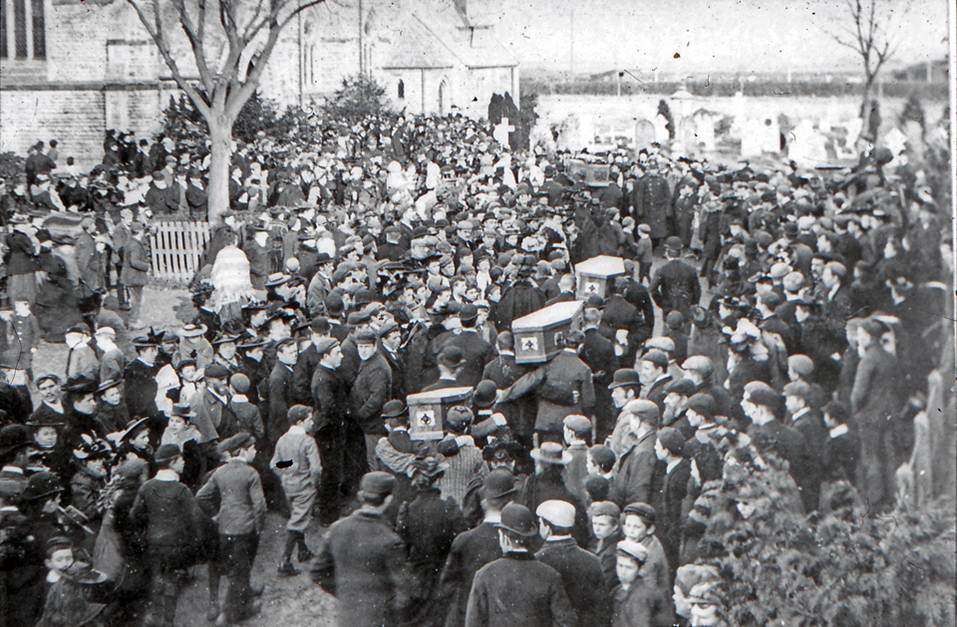 Farnham family funeral. 1896 (with the kind permission of the Fisher Parkinson Trust.)

Further census searching shows that Lucilla was taken in by her aunt and uncle, and by 1901 she was working as a Draper’s Assistant in Leeds. She married a Mr Daniel Meany, in Exeter, in 1917, when she was 34 years old. She went on to have a child of her own.

This has not been a happy story and I did not set out to find it, but I wanted to show how just one small slip of paper can be the key to unlocking vivid stories in the records held at the National Archives and elsewhere. This was a true story, involving a real family 120 years ago, pieced together from a variety of sources. And the key was found by chance in an unassuming volume of railway-related payments.

Who knows what you will find when you start searching.