Aubrey Wood of Woodross Estates submitted a claim to the War Damage Commission on 20 October 1941 for payments relating to bomb damage suffered to his properties. It appeared that he was only doing what countless other people up and down length of Britain had done in response to enemy action at the time – or was he?

There was something a little unusual about the South London properties at 88 to 102 Peckham Park Road and 3 to 13 Maismore Street that Wood was claiming for: they had actually been demolished in April 1939, almost five months before the outbreak of war. However, Wood’s fraudulent activities had not gone unnoticed. 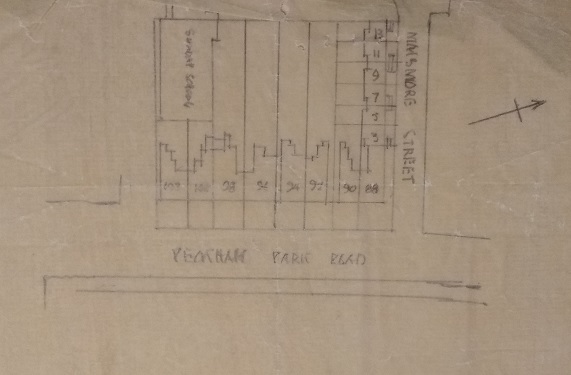 By 1941, towns up and down the breadth of Britain had suffered so much severe bomb damage that the War Damage Commission was set up to administer repairs to private properties affected by enemy action. Most damage was not structurally severe and could be remedied by additional work.

It would have been an administrative nightmare for government to organise teams of tradesmen for enacting building repairs during wartime.  Accordingly, owners of properties that had suffered bomb damage were instead invited to put in a claim for financial settlement, much like an insurance claim. Alternatively, an agent acting on their behalf – who in many cases was the tradesman responsible for the repair work – could put in the claim. The commission would only reimburse the cost of repairing the damage through payments for labour and materials, seeking receipts and invoices to confirm the amounts of money involved.

Despite the popular image of a united home front during the Second World War, the claim forms that have survived at The National Archives in record series IR 35 show that there were some unscrupulous individuals who were willing to take advantage of this government scheme. There were many people claiming additional funds for work that was not required, and – as we can see in the case of Aubrey Wood – for properties that had been demolished before any bombs had dropped. In a time before information was shared electronically, and when paper records were more difficult to locate, these kinds of deceptions were easier for those with criminal intent.

When suspicions arose around cases such as these, the staff of the War Damage Commission would need to investigate further. In the suspect cases of war damage claims found within series IR 35, the fraudulent claimant could be either the builder repairing the property or the owner of the property themselves – or, in some cases, a third party agent. There are also cases of all parties involved in a claim working together to try to deceive the War Damage Commission.

Because of the sensitive nature of the content of some of the files in record series IR 35, many of the records within the series remain closed. Not all the cases investigated were proved fraudulent in court, despite the best efforts of the Commission to provide evidence. But the Commission retained the files,  in case further suspect activity was reported involving the same people.

As a result of work to improve the descriptions on Discovery (our online catalogue), the documents within this record series that are open to the public can now be searched much more easily using a combination of the name of the owner of a property, the builder involved and, in many cases, the address.

In the case of Aubrey Wood (or Abe as he was sometimes called), the large amounts he claimed had already alerted the watchful eyes of the inspectors at the War Damage Commission. The files in document IR 35/15 chronicle the events that followed.

What confused matters even further was that the local authority recorded another man, Frederick J Francis, as the owner of the properties – not Wood. Seeing clear evidence of a deception, the War Damage Commission began interviews. They contacted Mr Francis. In his interview, he explained that he felt that he had been the victim of a ‘confidence trick’ by Aubrey Wood, who had tried to deceive him into purchasing properties that were virtually derelict. In an attempt to pacify him, Wood had volunteered to create ground rents for the residencies. This explained his continued involvement with the properties after selling them to Mr Francis: these rents would be administered by Wood’s company, Woodross Estates. After initially promising Francis ground rents of £6,800 per annum, Wood claimed that he was only able to negotiate a rent of £1,500 to be paid to Mr Francis: this angered his client further.

On 25 September 1942, Aubrey Wood was also interviewed. He feigned ignorance of the demolition in 1939, but he did note that he had sold the properties on to Mr Francis. He said that, since Francis was in the building trade, the hope was that he would be able to make repairs to the buildings. Wood blamed the fact that he was named as the property owner on the claim forms on an error made by a clerk in his employ.

The War Damage Commission were not convinced of Wood’s description of events. The case went to trial on 12 May 1943. Aubrey Wood’s defence was that there was no desire to defraud on his part. He persisted with his statement that there had been a clerical error: that the managing clerk at his company, Woodross Estates (sometimes referred to in the paperwork as ‘Woodcross’), was responsible for this.

In addition to his earlier insistence about this ‘clerical error’, Wood now claimed that this clerk had since been killed in war service. The absence of any paperwork confirming this clerk’s role was due to documents at Wood’s offices being destroyed by enemy action.

Wood’s testimony did not sway the judge. He was convicted at the Central Criminal Court on 14 May 1943 of ‘attempting by false pretences with intent to defraud to cause to be paid by the war commission the sum of £4000 to Woodcross estates’. Aubrey Wood was fined £500 with £50 costs. He appealed against his conviction on the 25 of October 1943, but the Court of Criminal Appeal dismissed this.

The brazen confidence of Aubrey Wood that his fraud would be successful might seem amusing to some. However, it is worth remembering that the funds he claimed would have come from the public purse. Fraudulent claims would have diverted money from needy people who were suffering as a result of bomb damage to their homes and businesses.