‘…a strange story of spirits, and worth reading indeed’

Wife and girl and I alone at dinner – a good Christmas dinner, and all the afternoon at home, my wife reading to me ‘The History of the Drummer of Mr. Mompesson’, which is a strange story of spirits, and worth reading indeed.

What could be more cosily festive than settling down after a good Christmas dinner to listen to a ghost story as darkness falls outside? This Christmas Day will mark 350 years exactly since Samuel Pepys did just that, his wife Elizabeth reading to him the strange tale of a ghostly drummer said to have haunted a family home in Wiltshire a few years previously.

The story was one of spiritual vengeance – after punishing an ‘idle vagrant’ by confiscating his drum, magistrate Mr John Mompesson had his household bombarded with nuisances of an apparently spiritual nature: unexplained knockings and drumming noises, foul smells, dancing furniture and many other troubling but harmless occurrences that pestered the family for months. The story became renowned, with hordes of visitors apparently descending on the house in hopes of witnessing the supernatural mischief.

Here at The National Archives, tucked away in the State Papers, is a first-hand account of some of the events that took place in the house in Tedworth (now Tidworth) in the early 1660s. This small and innocuous-looking letter, undated and unsigned, was written by an unknown person who had visited the house to witness the disturbances first hand. 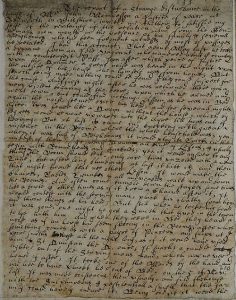 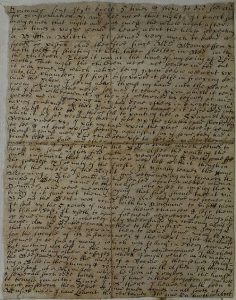 The letter relates some of the strange and unexplained events that were reported to have taken place in the house, beginning with unexplained nocturnal noises which alarmed the family, and presently the sound of a beating drum that moved from outside to within the house.  The drumming continued there, playing contemporary tunes and military tattoos and even taking requests from the assembled spectators.

After this the activity became more dramatic and physical – furniture dancing and throwing itself down the stairs and servants being ‘pluck’d out of bed’ and having objects thrown at them. The events the letter writer actually witnessed are slightly more low-key: shapes moving beneath bed covers, scratching and panting noises, and so on. Interestingly, these events took place in the bed of the children (where the ghost had apparently taken refuge) which would lead the more sceptical among us to suspect the children themselves might be the source.

‘The report of a strange disturbance’

‘It was more boisterous than usually’

The case bears striking resemblance to the later and hugely publicised ‘haunting’ that took place in London’s Cock Lane in 1762, during which some of the greatest minds in London were baffled by scratching sounds and rapped-out ghostly communications issuing from the bed of a child, and which caused much embarrassment when exposed as a fraud.

The story of the Tedworth drummer was included by writer and philosopher Joseph Glanvil in his 1668 work ‘A Blow at Modern Sadducism’, ostensibly a compendium of supernatural incidents put down in defence of the existence of spirits, ghosts and witchcraft. This cemented the story’s place in the canon of documented supernatural incidents, and it has been cited by believers as an early example of poltergeist activity since then.

On a personal level, I find everything about this letter appealing – the tiny size (19 x 15cm), the cramped and spidery handwriting – but most of all the glimpse it gives us into the curiosity felt by those in centuries gone by into the unexplained. Scepticism, rationality and science are so firmly entrenched in our modern lives that it is easy to forget that those who went before us led existences far more fragile and full of doubts.

Why not re-live the experience that the Pepys’ enjoyed that Christmas Day in 1667, and see if 350 years has made the story any less worth reading than Samuel himself found it?

In transcribing this letter I made liberal use of the palaeography resources available on our website, which were extremely helpful and really satisfying to work through, particularly for a novice such as myself – you can find them here.