Step into The National Archives’ library

Twenty years ago, we first opened our research library to the public. This anniversary seemed an appropriate time for me to see what I could uncover about the development of the library from its origins as a staff research collection to its status today – an integral part of The National Archives’ public service. 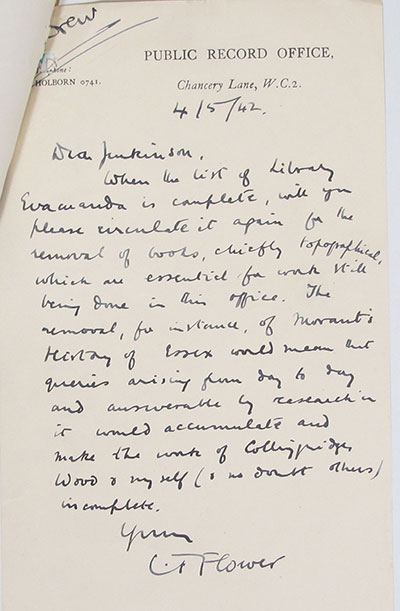 Memo from Cyril Flower, expressing concern at the evacuation of library books crucial to his work.

Our library was established in 1836 and has supported the work of staff ever since. Until 1997, very few members of the public were permitted to use this resource, although staff have always found it invaluable. In fact, it was considered so important that efforts to relocate library materials away from London during the Second World War – to prevent possible damage – met with quite a lot of resistance, as demonstrated in this memo from Cyril Flower to Hilary Jenkinson (PRO 1/629).

I knew that the library didn’t have its own public reading room until 1997. However, I hadn’t appreciated just how restricted access to the books was for members of the public until I read some of the files in our collection.

In 1885, Assistant Keeper Charles Martin wrote a memorandum of recommendations for the ‘re-organisation of the Library, duties of the Library Staff and use of library books by searchers’ (PRO 4/9/4). He made what was clearly a radical suggestion: that searchers be ‘allowed to go to the Library to see books which they wished to consult, or even perhaps under certain restrictions to have them in the search room’.

This recommendation was not implemented: for many decades members of the public who wished to consult books from the library had to ask for them to be brought to the search room by a member of staff – or apply in writing if they wanted to gain admittance to the library. 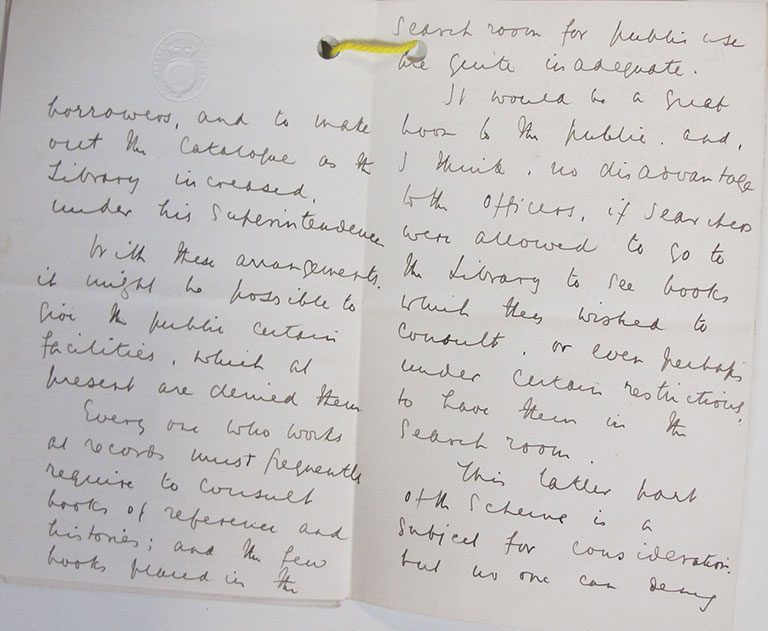 1884 – suggestion from Charles Martin that searchers be allowed to use the library.

By the 1950s, formal consent was supposed to be necessary for researchers to enter the library; in practice, they were given access on an informal basis through personal recommendations from members of staff. This was brought to light in 1953: a researcher, Miss Peake, sent a letter to Leonard Hector, Secretary of the Public Record Office, asking for confirmation that she could continue to use the library when it was really necessary, because ‘there are occasions when it is immensely valuable to me’ (PRO 1/1424). Miss Peake’s request prompted the library staff to draw up a list of members of the public who had access. There were about 12 of them, leading Hector to comment: ‘I had no idea that the privileged list was so large’. As a result, the decision was taken that members of the public must have applications to use the library sponsored by the Learned Society or other body by which they were employed.

The library remained out of bounds for the majority of readers until 1997. In March of that year, as part of the organisation-wide ‘Readers First Programme’, the Library was opened to the public with its own reading room at Kew: an event significant enough to be mentioned in the annual report for 1996-97.

Thankfully, we no longer require members of the public to apply in writing to use the library. In fact, to use the majority of the collection you don’t even need a readers’ ticket. That is only necessary if you are consulting some of our rare books or library material held in the Map and Large Document Reading Room. Otherwise, any member of the public is welcome to come and browse the shelves in the main library and use our books, pamphlets and journals for reference purposes. Just pop up to the first floor, turn right and keep going until you reach the bookcases at the end of the room!

A catalogue is an important tool for enabling access to a library collection; equally important is how the material is arranged on the shelves. I found several documents in the archives with suggestions for improving the cataloguing and classification of the library collection. It seems that our library has been re-catalogued and re-classified almost as many times as it has moved!.

In 1885, Charles Martin thought that moving the books to a proper library had made producing a printed catalogue unnecessary , as ‘officers could easily go there to consult the catalogue and refer to books without the delay of sending for them’. He recommended producing the catalogue on slips, with one set arranged by author name and a second classified by subjects (PRO 4/9/4). This recommendation wasn’t implemented but the library was completely reclassified and re-catalogued in about 1895 when it moved to a new block of buildings in Chancery Lane and the Rolls House was demolished. As a consequence, the third edition of Catalogue of the Library in the Public Record Office was produced in 1902.

By the 1920s, the library catalogue was being produced in a loose-leaf format. This means that it could to be updated fairly easily, and in 1926 additional copies of the catalogue were made.

In 1953, Charles Meekings – who had recently acquired responsibility for the library – wrote a thorough report on the state of the library, making recommendations for improvements. He suggested replacing the loose-leaf format with a card catalogue (PRO 1/1546). This idea was quickly implemented and a card catalogue remained in place until 1995 when it was decided to computerise the library catalogue ahead of the library’s move from Chancery Lane to Kew in 1997.

Meekings was was scathing about the decision taken in 1901 not to employ the Dewey Decimal Classification system, although he did not introduce this system himself.

It wasn’t until 2004 that the most recent project to re-catalogue and re-classify the library collection was completed. We now use the universally-recognised Dewey Decimal Classification (DDC) system. The library catalogue is available online, which improves accessibility for staff and members of the public alike. You can find it on the Help with your research page on our website.

Next week, to celebrate Libraries Week, we are offering behind-the-scenes tours of our Rare Books room and an event to highlight how material in our military, local history and annuals sections can help in your family history research. For more information, see the Events page on the website.

If you have not had the opportunity to use the library before, please do come along and explore the library yourself: discover how it can help support your research into the records and enhance your access to them.