With nationwide excitement building in advance of this weekend’s royal wedding, I wanted to take a look at the venue which will be at the heart of proceedings: St George’s Chapel, Windsor Castle. The chapel is a building steeped in history from its foundation in 1348 to the present day and – as an expert on the history of St George’s Chapel, and its associated royal college – I’ve been fortunate enough to poke around both the buildings of Windsor Castle, and the documents behind them. 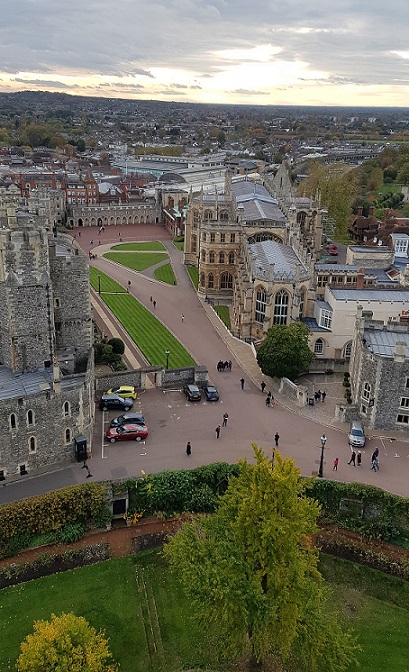 St George’s Chapel, Windsor Castle, as viewed from the top of the Round Tower. The Albert Memorial Chapel can be seen at the east end of the chapel, nearest to the camera [author’s photograph]

St George’s Chapel is a site of particular importance to the royal family as a location where they have celebrated victories in battle, buried and prayed for their dead, and – more recently – got married. It is a venue with a long history, and plenty of stories along the way. Thanks to its status as a royal peculiar 1, many of these stories can be found in our collections here at The National Archives.

The first chapel located on the site of the current chapel was built by Henry III in 1240-48/9 and originally dedicated to St Edward. 2 This chapel, however, would be re-founded as the first St George’s Chapel by Edward III in the aftermath of his great victories at Crécy and dedicated to ‘the honour of God, the Virgin Mary and Saints George the Martyr and Edward the Confessor’.

It housed a new royal college, and was to be the spiritual home of Edward’s new Order of the Garter. While the current St George’s Chapel – in which Prince Harry and Meghan Markle will be getting married – is a large and ornate structure, the original chapel was much smaller: 70 feet long and 28 feet wide, occupying the footprint of the area now known as the Albert Memorial Chapel. 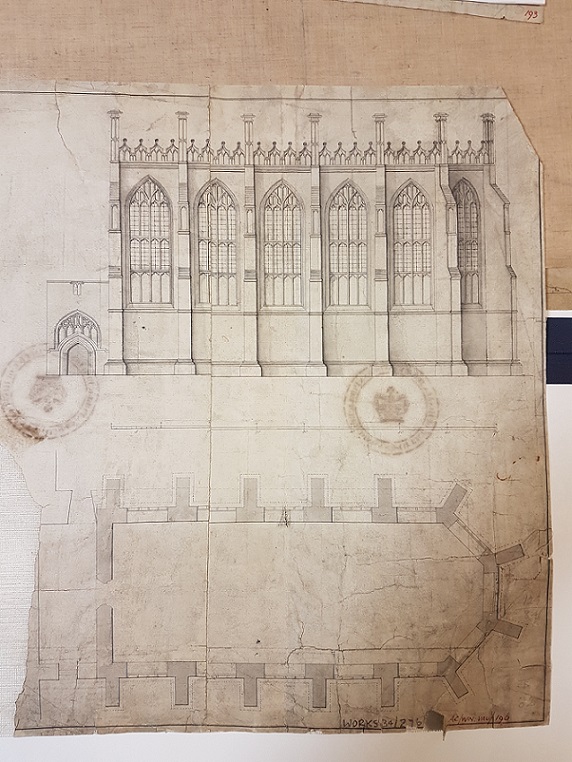 In its early days, the chapel wasn’t always particularly well looked after. In 1378 the Chancellor of England was sent on a royal visitation to assess the state of the college and chapel; he found that the area around the chapel had become ‘full of burres, brambles, weeds and other noisome herbs’. 3 Possibly in response to such concerns, in 1389 the remit of the Clerk of the Works (at this time the poet Geoffrey Chaucer) was expanded to specifically include repairs at St George’s.

The current structure of St George’s Chapel mainly dates from the 15th and 16th centuries. Edward IV re-founded St George’s College in 1475, providing the college with new lands and endowments, alongside a grand new chapel to act as a mausoleum and chantry foundation for the Yorkist dynasty, in which the king himself would take prime place after his death. The new St George’s was to be considerably larger than the previous chapel, and required a large section of the college lands to be flattened in order to free up space – in the area known now as Horseshoe Cloister at the west end of the chapel, where on Saturday the bride and groom will emerge at the end of the ceremony. 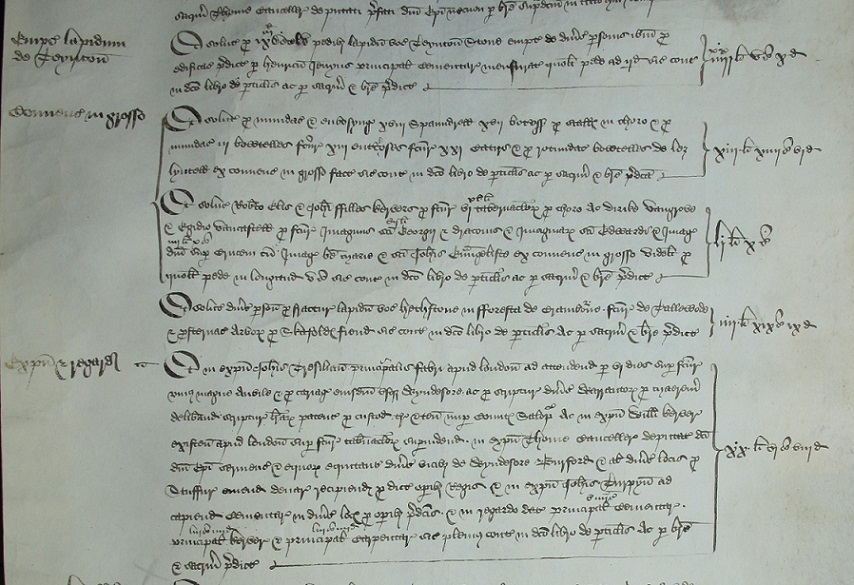 Accounts for the construction St George’s Chapel 1477-1479, including carved choir stalls, provision of Teynton and Heath stone for the chapel, and a ‘large anvil’ for the master smith John Tresilian [catalogue reference: E 101/497/17]

In its early years the chapel was mainly associated, not with marriages, but with royal funerals. Edward IV is buried to the left of the high altar, while his rival Henry VI is buried on the other side of the choir. 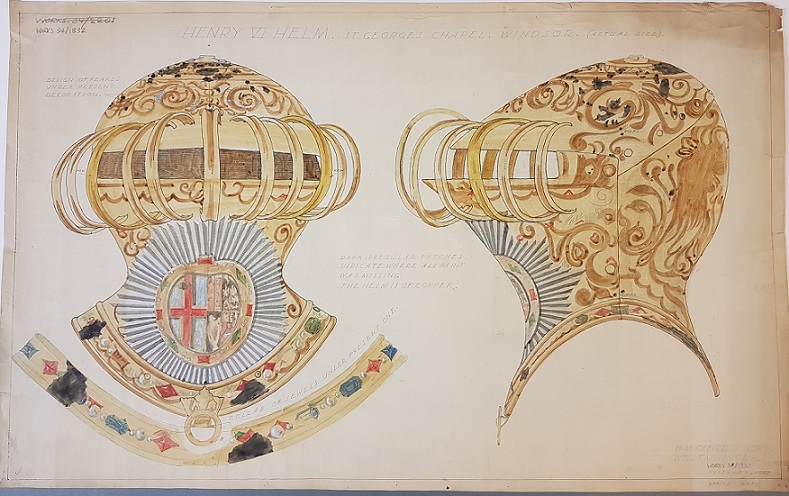 At this time the chapel was an important pilgrimage site, where crowds might form to visit important burials – including Henry VI’s tomb, where it was reported that miracles might occur. ‘Henry VI’s helm’, as reproduced in this drawing by the Office of Works in 1937, still hangs in the chapel today. 4 Other relics recorded in the 16th century, which sadly do not survive, included a piece of ‘St George’s skull, set in gold’, standing on enamelled white lions and decorated with pearls, rich stones, and an ostrich feather (although it was also missing three stones and one great pearl at the time of assessment). 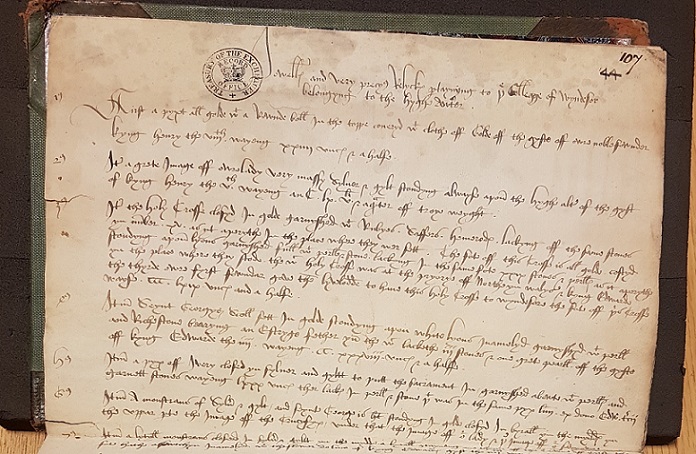 Edward IV’s grandson, Henry VIII, is also buried in the central aisle alongside his favourite wife Jane Seymour (although the vault itself is four feet further east than its engraved stone suggests). 5 The Tudor vault (which also houses the body of Charles I and an infant child of Queen Anne) is the older of two royal vaults under the chapel, alongside the Royal Vault commissioned by George III, located underneath the original St George’s Chapel, but accessed from behind the high altar in the current chapel. 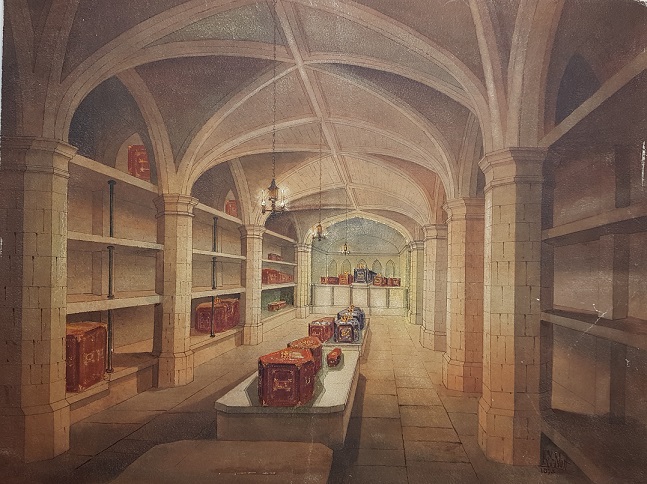 However, in the 19th century the chapel was the site of more positive royal connection, and the chapel became a popular venue for royal weddings – particularly during the widowhood of Queen Victoria, when Windsor became a sanctuary from the busyness of court in London. 6 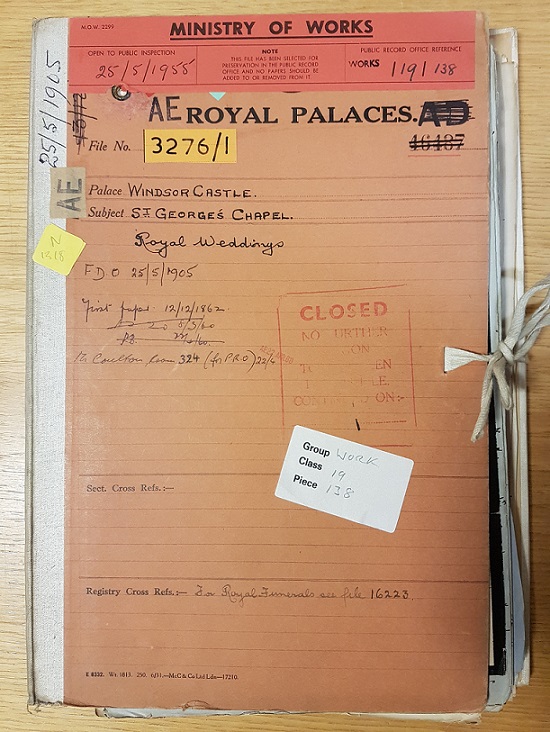 Planning a royal wedding produced a substantial amount of paperwork, some of which survives in the files of the Ministry of Works (formerly the Office of Works), as the chapel was altered and rearranged on a temporary basis for each occasion. 7 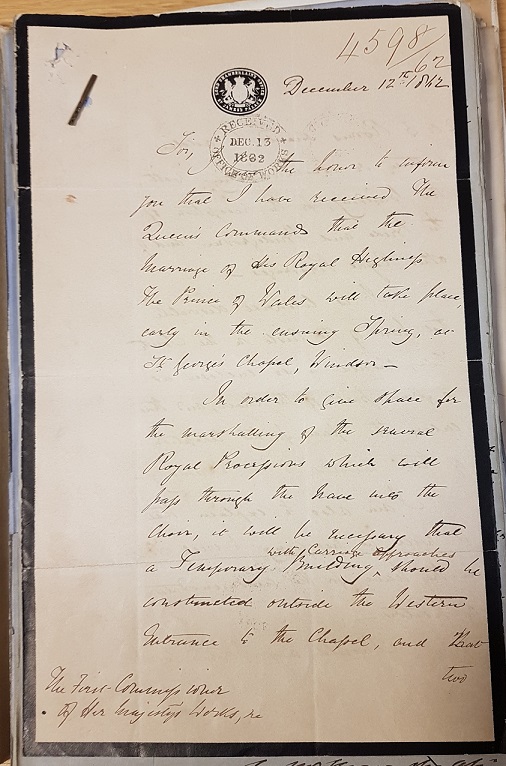 Letter announcing the wedding of HRH The Prince of Wales (the future Edward VII), and HRH Princess Alexandra of Denmark [catalogue reference: WORK 19/138]

This letter from 1862, for example, announced that the marriage of the Prince of Wales and Princess Alexandra of Denmark would take place at St George’s, and asked for several temporary structures to accommodate guests. The works included removing some of the gothic screens in the choir and constructing a large hall outside of the west doors of the chapel. 8 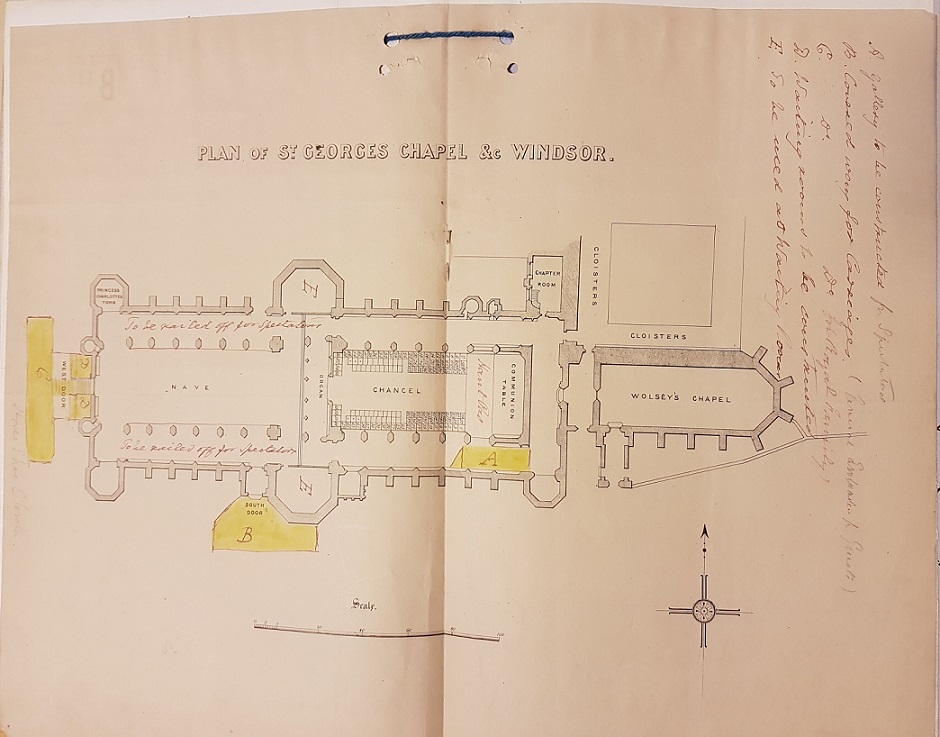 Proposed alterations to St George’s Chapel, in anticipation of the wedding of HRH The Prince Arthur, Duke of Connaught, and HRH Princess Louise of Prussia in March 1879 [catalogue reference: WORK 19/138]

Visual depictions of such works can be seen in the later marriage of Prince Arthur, Duke of Connaught, and Princess Louise of Prussia, including a raised gallery for spectators next to the choir and railed-off spaces in the nave. In this case, the plans also took into account the temperamental British weather, providing covered areas to disembark from carriages – at the south door for general guests, and the west door for the Royal family. 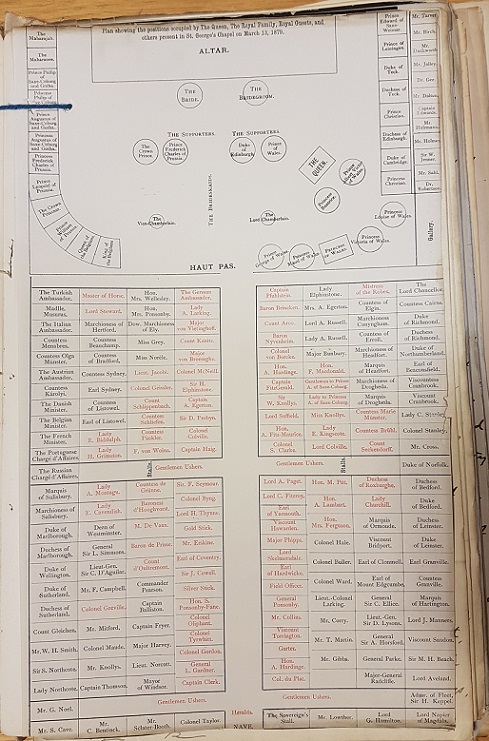 Seating plan for the wedding of HRH The Prince Arthur, Duke of Connaught, and HRH Princess Louise of Prussia in March 1879 [catalogue reference: WORK 19/138]

Among the registered files we also find a seating plan for the wedding. Queen Victoria took pride of place directly behind the supporters, while the immediate spectators (seated in a horseshoe around the altar) included various European princes, princesses, the King of the Belgians, and the Maharajah. European ambassadors had to settle for a place in the general stalls on the north of the chapel (the left side of the image); while the Mayor of Windsor received an invitation, he was placed at the back of the choir. 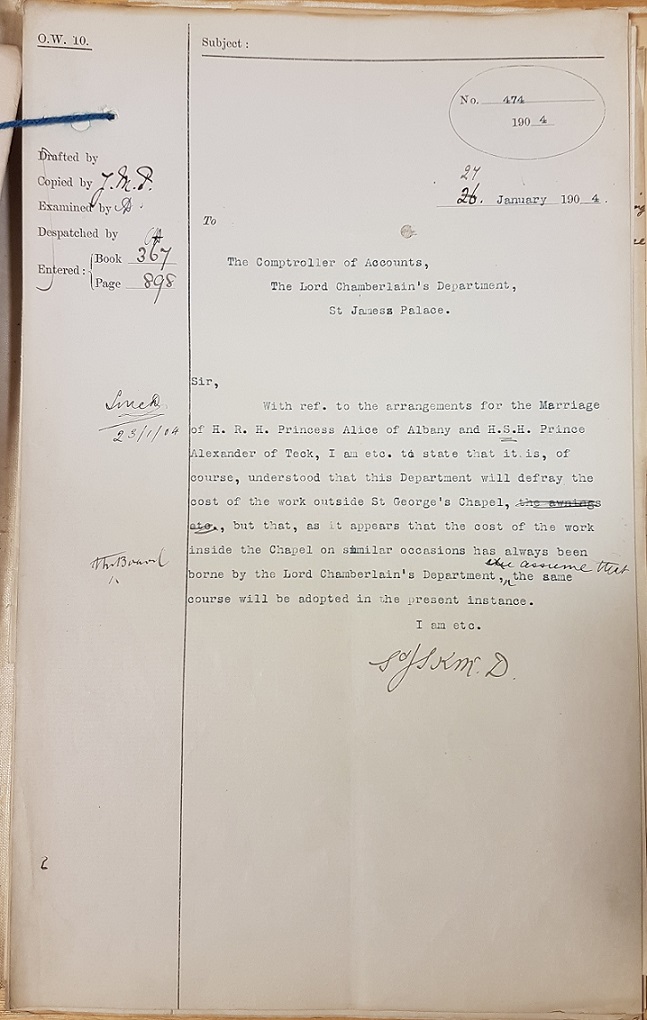 Letter regarding costs of the wedding of HRH Princess Alice of Albany and HRH Prince Alexander of Teck in 1904 [catalogue reference: WORK 19/138]

Once the festivities of each royal wedding were over, one final question remained: who would clean up? Given that each wedding may have caused damage from the construction of temporary structures, or by filling the chapel with spectators, the Dean and Canons were naturally concerned with ensuring their chapel was tidy at the end of proceedings. The files are full of back and forth negotiations about how much exactly needed to be cleaned. Questions about whether the organ required cleaning may seem trivial, but the real question often came down to who was paying for each aspect of the wedding, and whether it set a precedent. Certainly, by the time of the last weddings recorded in these registered files, there was a standard precedent for how such weddings were to be funded.

The history of St George’s Chapel is a long one full of twists and turns, tracing back almost 800 years, with many grand royal occasions along the way. After Saturday’s wedding, there will be one more piece to add to the story.