St George and the dragon 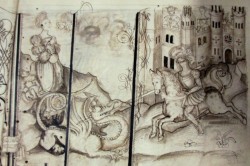 This 16th century drawing of St George and the dragon forms part of a frontispiece to a decree and order book from the Court of Augmentations. (Reference: E 315/91)

Regular readers of our blog may recall that a year ago my colleague Jenni Orme wrote a blog post marking the fact that 23 April is St George’s Day. One year on, I have decided to re-visit St George from a different angle. 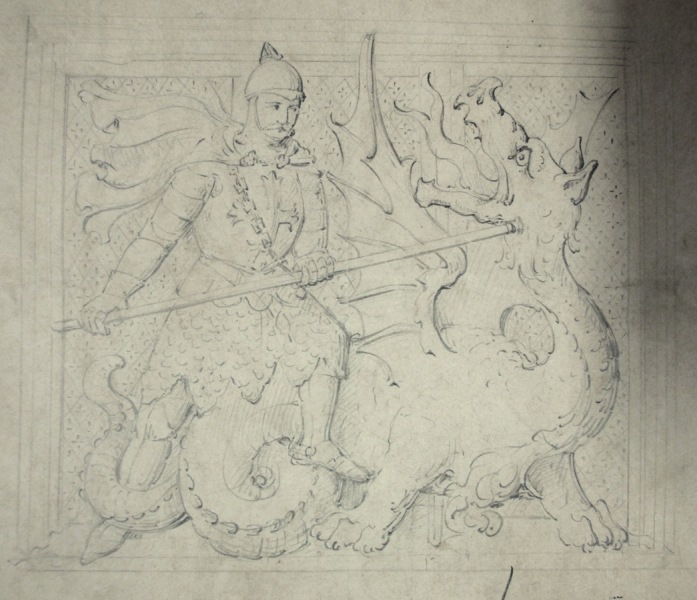 This 19th century drawing of St George and the dragon is a design for a carved wooden panel in the Houses of Parliament. (Reference: WORK 29/2594)

St George is said to have been a Roman soldier from Cappadocia (in present-day Turkey) who died as a Christian martyr in the early 4th century AD. 1 A popular legend about him is that he fought against and killed a dragon in order to rescue a princess. Over the centuries, many artists have produced rather romanticised images of this battle, often portraying George as a medieval knight – or what they imagined a medieval knight might look like – with weapons and clothing dating from roughly a thousand years after his lifetime.

English artists have been particularly fond of depicting St George because he is recognised as England’s patron saint. We share him with many other places and groups of people, including soldiers, farm workers, the Italian city of Genoa, and the eastern European country of Georgia.

Probably the best-known use of the image of St George by the British government has been on coins, especially gold sovereigns. In 1817, the engraver Benedetto Pistrucci designed a reverse (tails) side for this coin showing St George and the dragon. 2 You can see an 1817 sovereign on the Royal Mint Museum’s website.

Although they are no longer in general circulation, gold sovereigns are still produced as bullion and as commemorative coins. Their nominal face value remains one pound, just as it was in 1817, but their true value is, of course, much higher. Most modern issues of the sovereign still use a version of Pistrucci’s design. 3

As St George is a symbol of England rather than of the UK as a whole, his use on coins has occasionally been controversial. 4 A Royal Mint file dating from 1925, now held here at The National Archives, provides an example of this. 5

On 26 February 1925, a Scottish MP called John Brown Couper asked a parliamentary question about whether there any plans to change the design of sovereigns to something less specifically English and more representative of the UK as a whole. (Mr Couper suggested Britannia as a suitable alternative.) The file includes an official’s sarcastic suggestion for what the reply should be:

I do not know whether Winston Churchill, who at that time was Chancellor of the Exchequer and whose job it was to answer the question formally, ever saw the official’s comment. If he did, he wisely ignored it. The file also records the answer that Churchill actually gave, which was this: ‘I am not aware of any intention to mint new gold coinage.’

There is a slight twist to this story. The Royal Mint did actually produce some gold sovereigns in 1925, and it did use the St George and the dragon design on the reverse. 6

What nobody in 1925 could have foreseen is that the story ends with a second twist. Between 1968 and 1975, the Royal Mint moved the production of coins from London to Llantrisant, near Cardiff. 7 Although today’s gold sovereigns still bear the image of St George, they are made not in England but in Wales, the land of the red dragon.