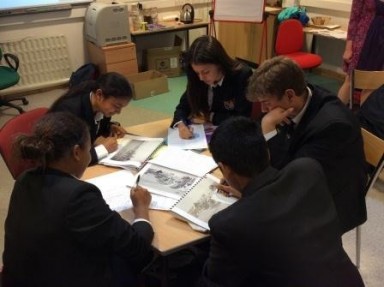 The National Archives outreach team spent an extraordinary morning at Lampton School in a workshop led by the writer, Aoife Mannix, looking at the experience of South Asian troops in the First World War with pupils at the school. Using records from The National Archives, including entries from the war diaries, the young people were offered an opportunity to imagine what it would be like to be a sepoy, crossing the proverbial ‘black waters’ and coming to fight in France.

Asked at the beginning of the workshop to describe the First World War as an animal the descriptions were very evocative: like Tyrannosaurus Rex, trampling over everything; like an elephant running loose; like ants spreading everywhere.

Exercises included an invitation to write a letter to a loved one as a means of bringing the experience to life. Many of the young people commented in their feedback how the creative writing helped access history in ways that more formal approaches can struggle to do.

Aoife provided the young people with plenty of intriguing questions to stimulate their imaginations and feed into their creative writing, for example ‘think of something you have never told anyone’ or ‘think of something that happened in your past that shaped your personality’. The young people also undertook an exercise looking at a First World War photo and imagining a colour, a smell or a sound as a way of expressing what may have been going on.

In their letters and other writing, the young people captured the epic sense of travel the sepoys experienced, their very mixed emotions fighting a war away from home, and the inevitable loss of innocence associated with combat. Hanzada, one of the pupils, inspired by a war diary account of men praying on board ship as they made their way from India to France, wrote: ‘We remain, anxious, brown skinned, some eating dahl and some sitting silently in fear of war…’ 1

Stripping away the bravado that can be associated with fighting and war the young people captured some key images and were able to dig deeper than an initial reading of the records can sometimes allow. Through their creative writing they were able to unlock the many hopes, fears and dreams of combatants who may not have been much older than these young people.