South Africa and the Somme

To mark the centenary of the Somme Offensive we will be posting a series of blogs that explore the contribution of certain Commonwealth nations to the infamous land battle that has so dominated our perceptions of the British Army during the First World War; today is the turn of South Africa.

Peter H. Liddle describes the South Africans as having been involved in what he terms the ‘progressive capture, consolidation and retention of Delville Wood’. 1 In short, the South African Brigade was up against fierce shelling, sniping from close range and a test of endurance in the face of ferocious German attacks that are almost impossible to comprehend. Although it was not only South African troops who took part in the significant fighting at Delville Wood; between 14 and 20 July 1916, it was the South African Brigade’s debut on the Western Front. The event rightly stands out as a major anniversary concerning South Africa’s contribution to what was truly a ‘World War’. Six days of continuous close fighting and heavy shelling, the likes of which occurred at Delville Wood, are noteworthy even in the wider context of the violence and tragedy of the First World War.

As the 1st South African Brigade came under the command of the 9th (Scottish) Division, the war diaries covering their service at the Somme are held in The National Archives series of War Diaries in WO 95. 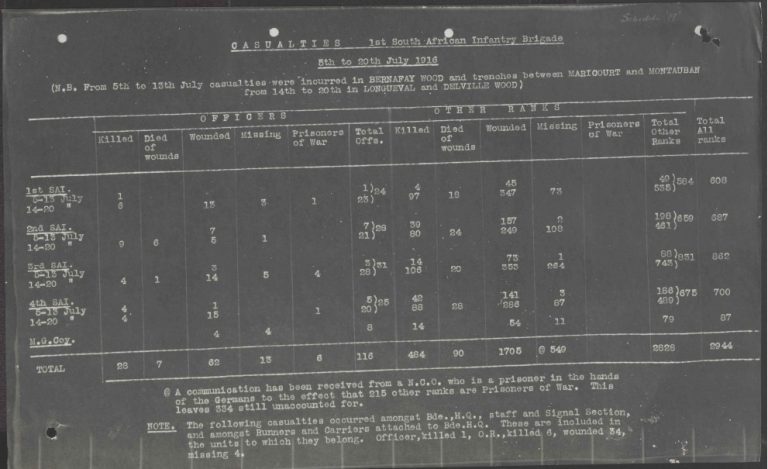 This snapshot from the Brigade Headquarters’ war diary indicates the vast number of casualties incurred by the 1st South Africans during the opening of the Somme Offensive during the first few weeks of July, and the second set of statistics indicates by percentage how devastating these losses were.

The fighting was fierce, but the Brigade did hold out until being relieved on 20 July by the 8th Battalion Suffolk Regiment and the 6th Battalion Berkshire Regiment. From just four infantry battalions and a machine gun company, 2,944 officers and men were recorded as missing, wounded, having been killed or having died of wounds.

The Brigade headquarters War Diary (WO 95/1777/1) contains a fantastic letter from the Officer Commanding the 9th (Scottish) Division – Major-General Furse – in which he wrote (secretly at the time) that the South Africans, as part of the Division, had ‘played a conspicuous and honourable part in one of the greatest battles in the world’s history’. Indeed, he wrote effusively of the infantry’s performance during this bloody engagement, stating they deserved whole hearted admiration and thanks for their ability ‘to sustain appalling and continuous shell fire, to try and dig for themselves trenches amongst the fallen trees and through the roots of Bernafay and Delville Wood, to suffer heavy casualties amongst their comrades and friends, to go on day and night for a week or more without any relief and with only snatches of disturbed sleep to bear all this time the stern responsibility of being the guardians of the very pivot of the Commander-in-Chief’s manoeuvre’.

This act, with the Brigade acting as guardians of this pivoting point, would cost many lives and put many South Africans in the face of industrialised warfare for the first time. However – as was so common in the period for British and Commonwealth troops – these tests of physical and mental strength could lead to extraordinary acts of bravery and courage. The Battle of Delville Wood was no exception. The National Archives’ WO 98 Victoria Cross registers there is an entry for one Pte. William Frederick Faulds VC MC who was awarded the highest decoration for bravery due to his actions during this part of the Somme Offensive.

It is an absolute privilege to work with the documents held here at Kew. As First World War researcher, I am especially fortunate as I familiarise myself with our incredible holdings that so richly tell the stories of the First World War by those who lived through it. As a relative of a soldier who was awarded the Victoria Cross I have always been fascinated by the highest award for bravery made to soldiers from Britain and across the Commonwealth. Only 1,358 awards have been made to 1,355 distinct recipients since the VC’s inception during the Crimean War. Within the collections of The National Archives we have WO 98, the correspondence and papers concerning the Victoria Cross from 1856-1953. The WO 98/8 Victoria Cross Register covers the awards made from 2 February 1900 to 1 September 1944, including of course, Pte William Frederick Faulds VC MC. 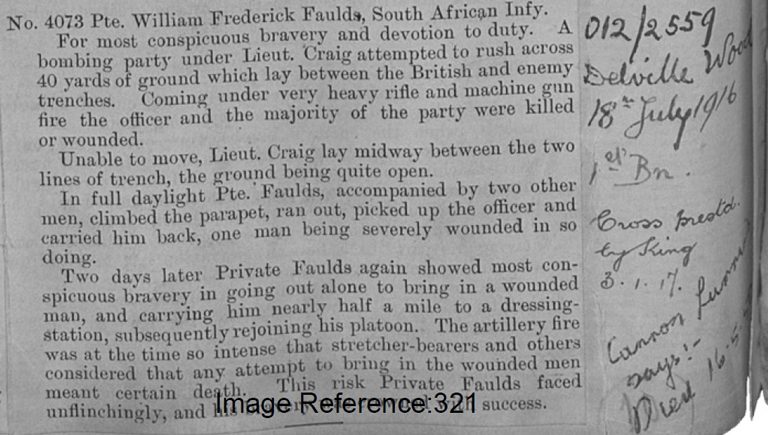 Quite often when hoping to describe these incredible acts of bravery, one finds that the citations speak for themselves. Pte. Faulds’ Victoria Cross citation reads:

‘No. 4073 Pte. William Frederick Faulds, South African Infy. For most conspicuous bravery and devotion to duty. A bombing party under Lieut. Craig attempted to rush across 40 yards of ground which lay between the British and enemy trenches. Coming under very heavy rifle and machine gun fire the officer and the majority of the party were killed or wounded. Unable to move, Lieut. Craig lay midway between the two lines of trench, the ground being quite open. In full daylight Pte. Faulds, accompanied by two other men, climbed the parapet, ran out, picked up the officer and carried him back, one man being severely wounded in so doing.’

Two days later Private Faulds again showed most conspicuous bravery in going out alone to bring in a wounded man, and carrying him nearly half a mile to a dressing station, subsequently rejoining his platoon. The artillery fire was at the time so intense that stretcher-bearers and others considered that any attempt to bring in the wounded men meant certain death. This risk Private Faulds faced unflinchingly, and his bravery was crowned in success’.

A VC citation gives us just one story amongst millions from the First World War, but Pte. Faulds’ VC was awarded for stunning acts of brotherhood and comradery in the face of indescribable danger. As we remember South Africa’s contribution to the Somme today, stories like the above remind us of the exceptional character shown and sacrifices made by these soldiers – in quite horrendous conditions – exactly 100 years ago.