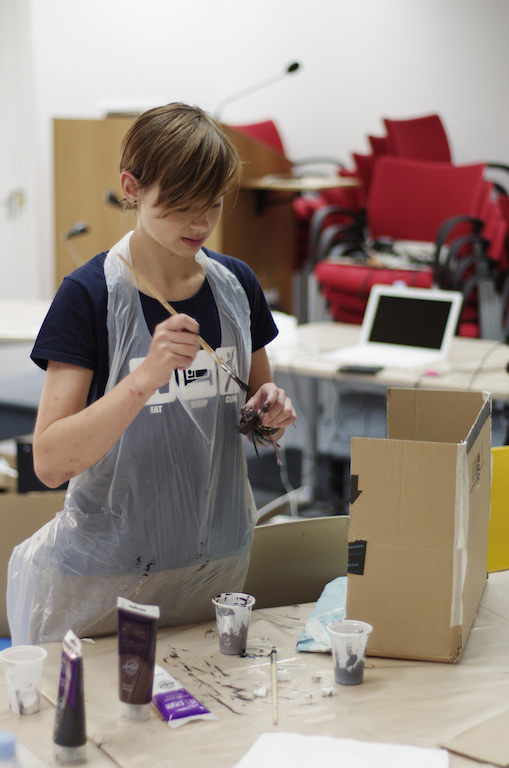 PVA glue, tarpaulin, cardboard, chicken wire, SLR cameras, tripods, Macbooks and lots of paint – Conference room A had been transformed into a busy and buzzing studio space ready for a project hosted by the Education team…

Commemorations of the Battle of the Somme often materialise as books or documentaries, but for a week in August, using our records as inspiration, a group of young people posed provocative and overarching questions on the worth of war and human sacrifice by creating beautiful animations. These were knitted together into an inspiring and moving stop-motion animation film. It was a unique and compelling process and one which raised as many questions about the Somme and war as it did about how archives are used and their purpose for different people. The group was led by professional filmmaker Nigel Kellaway and assistant Atlanta Weekes, who both have a background in working with community groups on film and visual communication projects.

Through an online application process, young people with an interest in history and film were asked to write 100 words on why they would like to be involved. The ten most inspiring responses were selected by the Education team and the young people invited to join us for this exciting project.

One of the most special things about this project was that the students were able to make it their film – uncensored and with no agenda. Anya said that only by ‘preserving’ original documents such as letters and diaries can we ‘listen’ to the ‘voices’ of the ‘people who actually experienced the war’ and that it is ‘so important that we do not forget [these] people and what happened to them’.

Indeed as Anya posed, ‘how can these original documents still be relevant and provide new insight into today’s information-overloaded world?’

Document workshops at the beginning of the week were an opportunity for the students to not only start exploring the history of the Somme but to ‘gain valuable experiences’ such as handling original documents and develop ‘critical thinking of sources’. The students started to imagine ‘that an actual human scratched those words and experiences into the page’ and that it helped them think ‘about the numbers [of casualties] in terms of real people with friends and family and a story of their own’. Jonathan said that ‘to see all of these documents in the flesh is an experience which will never leave me’, which for me, is exactly why The National Archives should provide the space and opportunities for people to discover records in their own way.  We are uniquely placed to think about all of the different ways in which society and individuals can remember history, and indeed what it means to remember history. 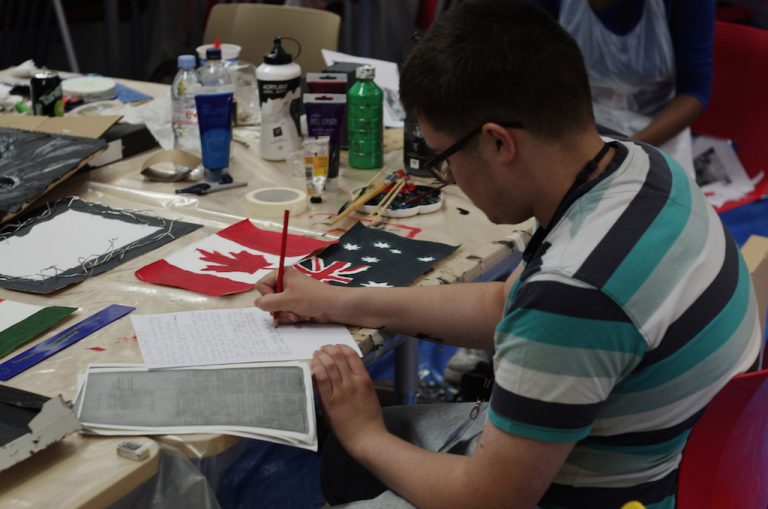 The documents directly informed and inspired the content of the film – Jonathan explained that the knowledge he gleaned from the war diaries in WO 95 and Victoria Cross Register (WO 98/8/269) about the involvement of the Commonwealth helped him to choose which country flags to use. Pav remarked that the documents she researched in MUN 4 and 5 and MH 47/142 helped her look ‘deeper for the reality’ and so ‘heavily influenced’ her design for the set which showed two sides to the story of women workers in munitions factories.

On hand throughout was our First World War researcher James Fleming, whose knowledge and enthusiasm helped the students probe deeper into the subject, gathering facts and ideas for their films. Pav said James provided context and helped her distinguish between types of military records – and even offered ideas for further reading! It was wonderful for the Education team to involve members of staff from different departments and to see our colleagues dropping in throughout the week to check on the students’ progress. 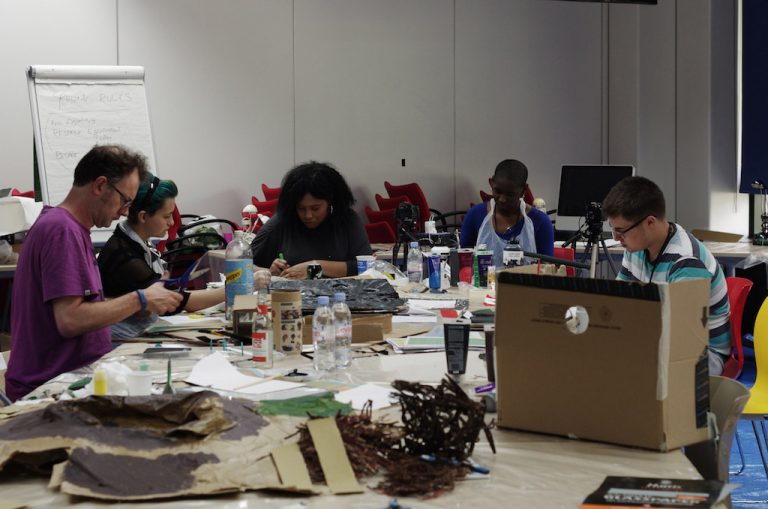 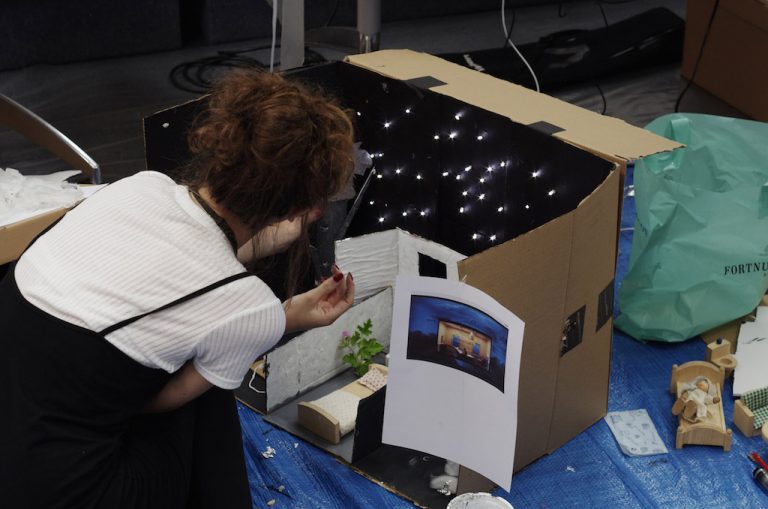 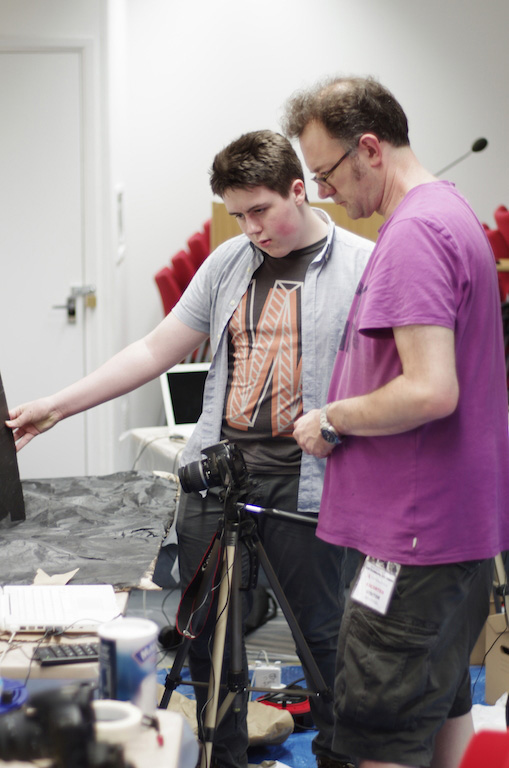 Nigel had developed a narrative storyboard on which to hang the film, offering continuity and flow; each student worked on a separate section. The sections were knitted together and voice-overs added.  Anya said that it was ‘nice to have a particular part of the film to work on… it meant that everyone contributed equally’ so at the end all involved could say ‘I did that’.  Not only did the students learn about history but they also developed new practical skills, and Jonathan said ‘I imagined that working with the cameras would be quite daunting, but when I started filming, it turned out it was quite simple’.   Nigel and Atlanta’s patience, kindness and unflappable demeanours kept the ship tight and the project to deadline.  Pav commented that with their help she was able to ‘create a fantastic set which still mirrored [her] original idea’.  The Education team marvelled at how the ways in which the paper documents were beginning to come alive in a 3D, kinetic way.  Indeed, we also helped to recreate the famous Loch Nagar crater!

‘I have learnt that The National Archives is a place for everyone to be, not just historians and academics, but anyone who wants to learn fully and richly about almost any part of British history.’

This quote from Jonathan is a wonderful and moving endorsement of the organisation and what we strive to achieve. It was an incredibly moving week. Not just in the subject matter of the film, but also in observing how the students became comfortable enough with each other to be able to express their ideas and create art. I do believe it was a unique experience for them – and for The National Archives as an organisation. The transformation of a corporate space into a buzzing studio just proves that the whole building can be used to explore and learn from the collections in so many ways. The National Archives can engage with different types and generations of people – and so it should, as sector leader. What else are we here for but, as custodians, to allow access to any sort of enquiring mind?

‘I would definitely encourage more projects like this because it really inspires young people and teaches them directly about The National Archives and the work they do’ – Pav.