A snowball fight in Constantinople

It looks as though, yet again, there is no prospect of a white Christmas for most of us in the UK. Many will be disappointed… but be careful what you wish for. In 1600, the innocent pleasure of a snowball fight turned into something much more lethal. 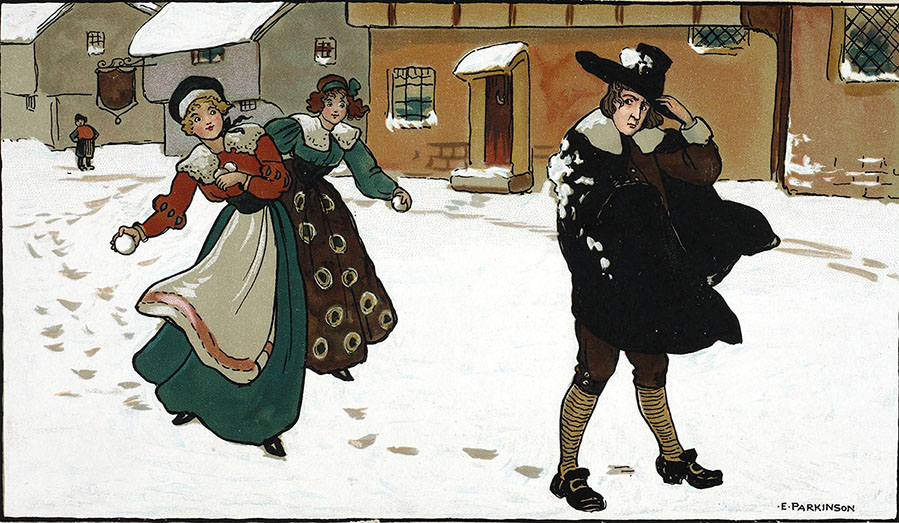 The city of Constantinople was at the heart of the widespread Ottoman Empire and the importance of trading luxury exotic goods resulted in the presence there of diplomats, merchants and sailors of many European nationalities. England had had a formal diplomatic presence in Turkey, funded by the Levant Company, since 1581.

In January 1600, when the city was in the middle of a deep freeze, a group of Greeks and Englishmen were taking advantage of the situation and indulging in a snowball fight. According to the English ambassador, Henry Lello, writing to Sir Robert Cecil, Elizabeth I’s Secretary of State, a stray ball thrown by a Greek hit the master of the French embassy as he was passing by 1.

Assuming it had been thrown by a servant of the English ambassador, the Frenchman became angry (‘fell into great Collor’) and, returning to his embassy, reappeared two hours later accompanied by between 30 and 40 men wielding guns (‘dagges’), staves and swords. This impromptu company had been strengthened by a group of mariners from a French ship moored in the harbour.

Lello went on to claim that the French stood in wait for the unarmed Englishmen to ambush them on their return to the embassy, with six to eight men attacking each of them, causing some very serious injuries and leaving two of them permanently maimed. The Venetian ambassador (‘Baylo’) witnessed the ‘butcherly fight’ and cried out ‘All shame uppon them’. When the English rallied and attacked in response, the French retreated into the master’s house.

Lello’s concern was not just about the injuries to his men; he was also aware that this made them subject to ridicule (‘this being an occasione to make the Turks laughe at Christiens’). He claimed that he had done all he could to avoid the conflict and alleged it was one of an ongoing series of injuries experienced at the hands of the French embassy. He felt himself unable to retaliate, given Elizabeth I’s wish for an amicable relationship with the French king.

The sensitivity of this amicable relationship is also stressed in the correspondence between the King of France, Henri IV, and his ambassador in London 2. At about the time of the snowball fight, Henri wrote endorsing his ambassador’s insistence that English negotiations in Constantinople over diplomatic rights and freedoms should not undermine the French position with the Sultan.

The ambassador, the Sieur de Boissize, noted ‘l’indiscrétion’ of the English agent in Constantinople and that he was acting in a way which was prejudicial to Henri’s interests. This suggests there were underlying tensions between the two sets of diplomatic representatives waiting to boil over.

We also hear an account of the snowball fight and its violent aftermath from the Venetian ambassadors, Girolamo Capello and Vicenzo Gradenigo, in letters sent to the Doge and Senate 3. According to them, the battle was more evenly matched and the French and English ambassadors themselves, far from attempting to separate the parties, were about to join in when night fell. They found that ‘each attributed to the other the origin and beginning of the quarrel’. The Venetians took credit for calming things down, succeeding ‘in soothing their ruffled tempers’. The French and the English each sent three men to the Venetian embassy who ‘had no part in this affair, and were extremely annoyed at what had happened’, but who agreed to investigate and punish the person responsible, ‘whoever he might be’. A formal reconciliation between the ambassadors followed.

This was not to last, however, as a fresh quarrel broke out less than three weeks later when the Turkish authorities became involved. The heightened tension resulted in the English ambassador threatening to withdraw from trade with the Ottoman Empire to focus on trading with ‘countries far richer than this… and seas where they can expand themselves at pleasure (alluding to the Indies)’. The Venetian report on the ongoing quarrel found in favour of the French as being more wronged by the English than vice versa, although their judgement may also have been influenced by the unwelcome incursions of English shipping into Venetian waters.

It may not be possible accurately to apportion blame for a snowball fight turning into an armed street battle at a distance of four centuries, but it is certainly a reminder to make sure that you only throw snowballs at people who are expecting them!