The latest instalment of the ‘Terminator’ franchise has hit our cinema screens. A rather aged Sarah Connor and T-800 android assassin return to save humanity from a future machine-dominated world. The original film was released in 1984, and became a box office hit and cult movie. It was the start of a franchise that now numbers six movies, a TV series, and two web-based series.

The machine dominating the fall of mankind in the film is called Skynet – a satellite system designed to protect the Earth. But the fictional Skynet became self-aware, and following attempts to switch it off, decided all men would try to kill it. Thus started the rise of the machine. But what is perhaps forgotten is that Skynet is the name of a real communication satellite system, that has been orbiting Earth since 1969.

Hollywood was not the first to put a satellite system for military communications called ‘Skynet’ in to space – the British government’s Skynet dates back to the late 1960s. 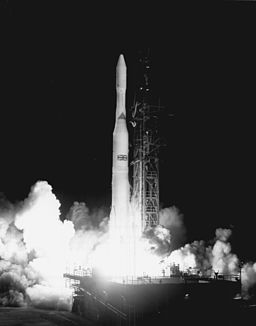 Those early Cold War years saw Britain trying to keep pace with America and Russia. Although attempts at launching rockets in to space were abandoned in the late 1950s, events including the Suez crisis (1956), Cuban missile crisis (1962), and the breaking up of the British Empire during the 1960s meant the Ministry of Defence (MOD) still needed to develop secure satellite communications with its military stationed around the world.

Skynet 1A was launched in 1969 from Cape Kennedy’s Complex 17. It was to orbit at 22,500 miles above the Earth over the Indian Ocean, off the East coast of Africa. Skynet 1B followed in 1970. These satellites were meant to provide Britain with a secure military communications link between points as far apart as England and Singapore. Skynet 1B never reached the desired orbit, and was abandoned. Skynet 1A didn’t last very long either, although it is still in space, in a geostationary graveyard 1.

Following the original launches in 1969 and 1970, Skynet 2A was launched in January 1974. Sub-standard coatings resulted in the satellite failing, and it was destroyed upon re-entry to the Earth’s atmosphere. Skynet 2B was launched successfully in September 1974, becoming the first successful non-amateur communication satellite built outside of America or the USSR. Skynet 3 was cancelled, and dependency on military communications transferred to the American satellite network. 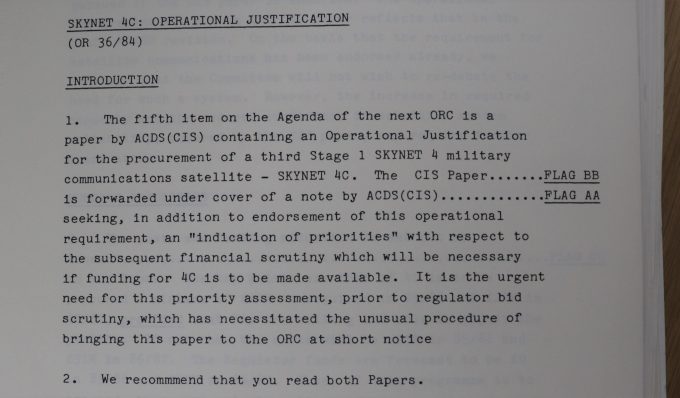 Britain started to invest in the next generation of Skynet satellites. By 1984 Skynet 2, now more than 10 years old, was reaching the end of its useful life and was ‘beginning to wander off its fixed orbit’ 3.

With Skynet 3 cancelled, Skynet 4A was established – a design to be launched from the space shuttle. It was planned initially as a two-part satellite system, able to cover failures and capacity. But in 1984 the MOD changed its assessment. The Falklands War and the estimated increase in future capacity highlighted the need for a third stage 1 satellite, Skynet 4C. The cost was estimated at £95.1 million, or £97.3 million if launched by Ariane 4, over a four-year period. The UK was also committed to providing spot beam 4 cover in Europe to the American army. This included a £7 million payback for any failure to provide the cover.

The assessment report also claimed there was no alternative communication system to replace Skynet. The Royal Navy used SatComs (Satellite Communications) as its primary bearer. The alternative for the Royal Navy was HF/LF (High and Low Frequency) assets; but the Russian Ocean Surveillance System obtained much of its information from HF.

Space for satellites in space was limited. The UK had already booked the last available spot in the required (53 degree) orbit, but Russia would take the slot if the UK failed to launch a third satellite by 1988. The report also noted the requirement for three stage 2 Skynet satellites.

Skynet 4C was built by Airbus Defence and Space and originally had a lifespan of seven years. Twenty-four years later it remained a working and active communication system. Skynet 4D was designed to replace Skynet 4B; this satellite, and the later 4E and 4F, cost approximately US $520 million, including the launches by Delta and Ariane boosters, and ground station equipment 5.

The cheaper and preferred option was the Shuttle – £23 million cheaper than Ariane. Ariane was unproven at the time and NASA gave reassurances regarding the launch, and resolution of issues with the solid rocket booster. The Space Shuttle Challenger disaster saw the satellites redesigned for compatibility with a rocket launch. The Skynet 4B was modified easily, and was launched on 11 December 1988. It is presently in a geostationary position over Africa 6.

The first three Skynet 4 satellites were launched between 1988 and 1990, with a further three (Skynet 4D, 4E and 4F) launched between 1998 and 2001. These have nuclear hardening, anti-jamming countermeasures, and laser protection. 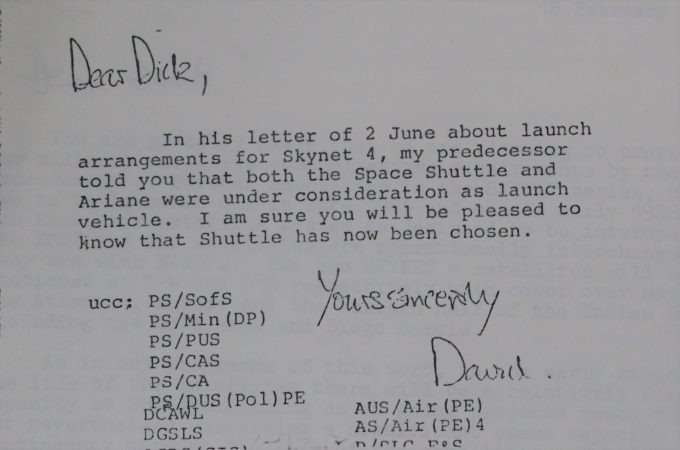 Confirmation of the Shuttle being chosen to launch Skynet. Catalogue ref: DEFE 13/1780

Skynet 4 models were due to reach the end of their operational life midway through the 2000s. The MOD published details of the contract for the replacement, Skynet 5, in January 2000.

In February 1981 France approached the Foreign and Commonwealth Office to work with the British to secure joint SATCOM co-operation 7. The joint private sector venture would involve the role of telecoms going to BAE Systems and in return the French company Matra would supply equipment. France opted to develop their own Syracuse programme. Anglo-French partnerships have continued, with Matra and Marconi applying for contracts in Skynet 5.

In September 2019 the MOD launched its competition to operate and maintain the UK’s next-generation military satellite communications system, Skynet 6. So be assured, Skynet will continue to watch over us, just in case Star Wars does become a reality.