On July 24, 1914,  Count von Mensdorff, Austro-Hungarian Ambassador, communicated the text of the ultimatum issued by Austria to Serbia to Sir Edward Grey, British Foreign Secretary, and Sir Edward expressed his shock at its exceptionally harsh terms. Grey took the matter to Cabinet later the same day – it was a ‘rude awakening’ for ministers, who, up to then, had been preoccupied with the Ulster crisis. Having secured the Cabinet’s approval, and following precedents established during earlier Balkan crises, Grey began to explore the possibilities for mediation. He proposed that the four ‘disinterested’ powers – Britain, France, Italy and Germany should intervene if trouble between Russia and Austria escalated. Grey also pressed Austria to extend the time limit of two days regarding the ultimatum.

A document which shows the sincerity of Grey in making his proposal for collective mediation by ‘disinterested’ powers is the telegraph message that he sent to Sir Horace Rumbold, British Ambassador to Germany, on 24 July, shown below:

Grey has received a note communicated to him by the German Ambassador, Prince Lichnowsky, which emphasised the view of the German Imperial Government that the matter ought to be settled exclusively between Austria-Hungary and Servia. Plainly, Grey did not share that view. It is notable that Grey realises that the active involvement of Germany in his proposed mediation scheme is crucial if it is to stand any chance of success. There is that element of realism present – he is not just an idealistic ‘dreamer’ about a peaceful solution.

The four-power mediation proposal came to nothing: although the German Ambassador for London, Prince Lichnowsky, reacted favourably to Grey’s scheme, it was never seriously entertained by Bethmann-Hollweg, the German Chancellor, and was rejected by Kaiser Wilhelm II. By the time that Austria-Hungary declared war on Serbia on 28 July, mediation looked like a mere pipe dream – Grey’s initiative had proved to be a non-starter.

There were differences between Sir Eyre Crowe, Assistant Under-secretary and Grey about diplomatic strategy during the July Crisis. Crowe was preoccupied with the threat from Germany, urging Grey to send a ‘warning signal’ to Germany – to make it clear that Britain would support France in the event of a German invasion.  The public records show Sir Eyre Crowe, Assistant Under-secretary, urging Grey to send a strong signal to the German Government. In a memorandum written by Crowe on July 25, he gets to the heart of the matter: ‘the point that matters is whether Germany is or is not absolutely determined to have this war now’ (FO 371/2158). He holds out the hope that Germany can be made to stop in her tracks, if she can be made to realise that England will stand by France and Russia. He suggests that the only effective way that this can be brought home to the German government is as follows: ‘If, the moment either Austria or Russia begin to mobilise, HMG give orders to put our whole fleet on an immediate war footing, this may conceivably make Germany realise the seriousness of the danger to which she would be exposed if England took part in the war (FO 371/2158).’ 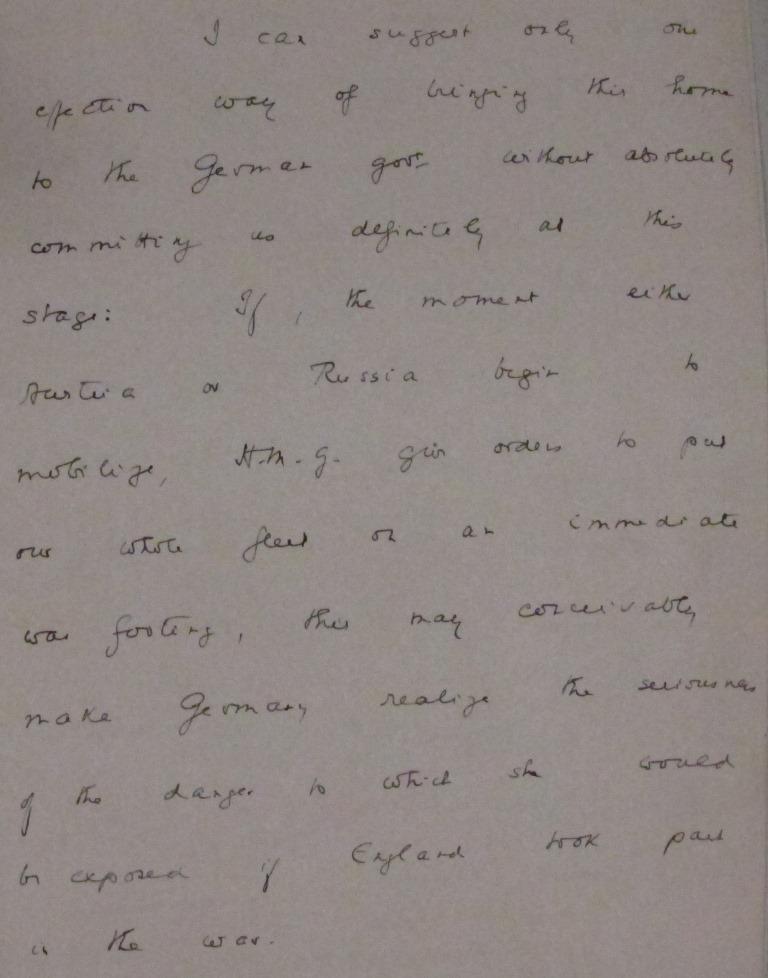 Sir Edward Grey’s comment on this memo, written in red ink, reads: ‘Mr Churchill told me today that the fleet can be mobilised in 24 hours, but I think it is premature to make my statement to France and Russia yet’ – Grey is very cautious about committing Britain in this way at this stage.