Why did Siam join the First World War?

There is a little-known history regarding Siam’s decision to participate in the First World War on the side of the Allies, rather than remain neutral; something that can be explained in terms of political necessity and the survival of Siam.

During the reign of King Vajiravudh (1910-1925) Siam was the only independent country in the region that did not suffer from the demands for territory or other concessions. However, Siam’s sovereignty had suffered from encroachment, violations and limitations imposed by Western imperialism since the mid-19th century. In effect Siam was regarded as a second-rate nation in the international community, with limited autonomy in foreign relations, economics and commercial and judicial affairs.

Nevertheless, Siam managed to maintain independence from imperialist expansion. It benefited from rivalry between the European great powers, and used skilful diplomacy to become one of the founding members of the League of Nations in 1919. 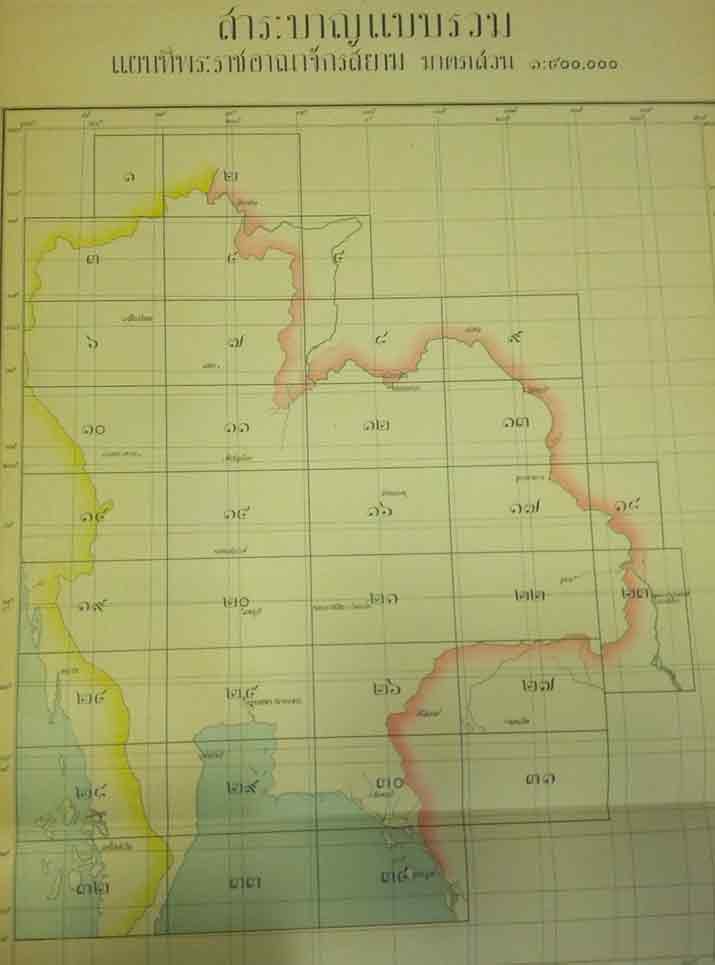 Before Vajiravudh came into the throne in 1910, Siam had ceded territory to the Federal Malay states, which were under British protectorate, in exchange for a loan.

Territory had been lost in 1893, too: French gunboats blockaded the port of Bangkok at Pak Nam, leading Siam to cede the right bank of the Mae Kong river and to establish a 25km strip of demilitarised zone on the left bank. Also as a result of a new treaty with France, Siam ceded territory it held to the south of the Dangkrek Mountains in 1904.

All these were still fresh in the mind of people in Siam.

Not only was there uncertainty about the independence of Siam from external pressure, there was also discontent among the army officers. This resulted in a failed uprising against absolute monarchy in 1912 (FO 371/1473), reflecting the internal friction within Siam.

The opportunities of the First World War

The start of the First World War presented a chance for Siam to grow in strength and to arouse a spirit of patriotism. King Vajiravudh was well informed about development of war in Europe right from its beginning. He was determined to follow a course that would give the greatest advantage to Siam.

At first, it seemed appropriate to maintain neutrality. A confidential report of conversation between Herbert Dering, British Minister at Bangkok, and the Siamese’s Minister for Foreign Affairs, Prince Devawongse, reflected that:

‘His Majesty’s Government feels that owing to geographical situation of its territories so remote from the warfare and to [the] fact that its interests are not yet so directly affected as other neutral powers, it would therefore be preferable while maintaining its neutrality to watch the further development of matter until its interests will demand similar action.’ (WO 106/62)

This policy of neutrality was widely accepted and appreciated among the Siamese population. However, Siam’s changing attitude begin to show in August 1915. A German plot to organize a body of disaffected Indians in Siam to make an armed raid into Burma showed that the Germans had compromised Siam’s neutrality. Siam began to search for reason to join the war effort.

Seeing signs of a changing attitude, the French government instructed their Minister in Bangkok to convince Siam to join the war, and also suggested the country send an Expedition Force to France in return for the abandonment of France’s extra-territorial jurisdiction. The French wanted to increase influence with Siam, as well as obtain consent for the creation of roads linking Bangkok and Battambong (FO 371/3364).

Sir Herbert Dering, the British Minister in Bangkok, expressed his strong disapproval; he thought that most the Allied powers could do was ‘induce Siamese Government to protest as Signatory of the Hague Convention against Germany’s past and threatened violations of International Law’ (WO 106/62). 1

But the Heir Presumptive, Prince Chakrabongs, together with Prince Charoon, the Siamese Ambassador to France, suggested to the king that Siam should not be unduly influenced by the negative feelings of the British. Prince Chakrabongs stated that Siam would benefit in sending the Expeditionary Force: it would demonstrate the sincerity of their intentions and, as an active partner in the war effort; Siam would help increase its chance of improving its treaty condition and standing with western powers.

The situation changed in favour of the Allied powers once the United States of America declared war with Germany and Austro-Hungary on 6 April 1917. This caused King Vajiravudh to think that Germany would not win, and made him understand the advantage of joining the Allies. According to a secret memo held at the National Archives of Thailand, the King stated to his council of ministers on 28 May 1917 that, as a neutral, Siam could hope at best to retain what it had, but it would run a risk of losing a great deal. Siam would be at the mercy of the Allies if Britain and France decided to take over German assets and privileges in Siam.

However, Siam could gain from taking the Allied side. Any treaties with Germany would be terminated, and the Allies may consent to amending the unequal treaties that had bound Siam since the middle of 19th century.

In the early morning of 22 July 1917, King Vajiravudh declared a state of war with Germany and Austria-Hungary. 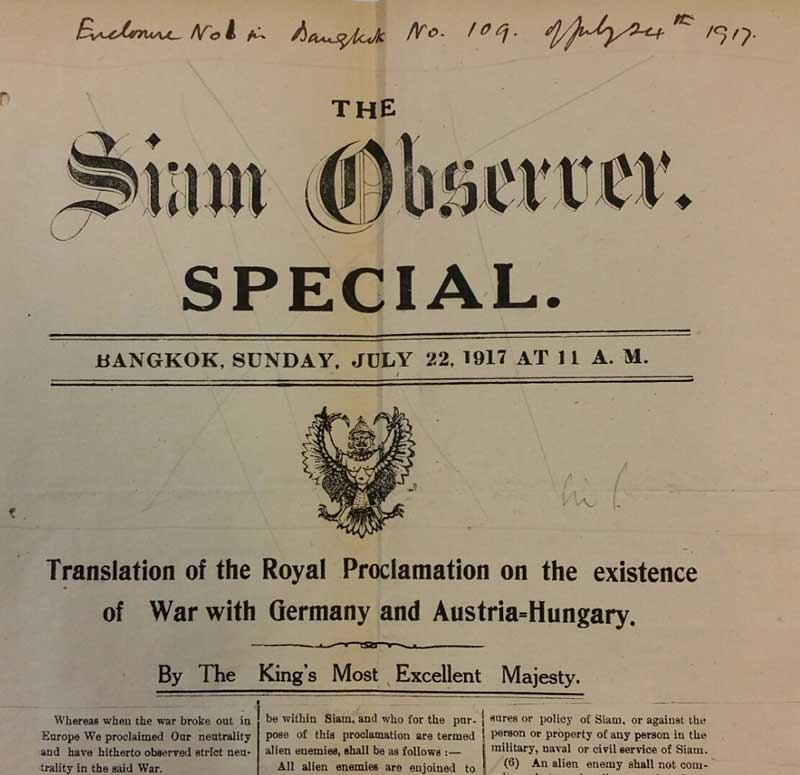 Translation of Siam’s proclamation of the state of war with Germany and Austria-Hungary (catalogue reference: FO 371/3028)

On 21 September 1917, the Siamese War Department issued a call for volunteers for the expeditionary force. About 1250 men were recruited, including motor transport units, medical personnel and aviators. King Vajiravudh had already issued a royal edict for a military mission to liaise with the Allies in Europe. This mission was headed by General Phya Bhijai Janridh, commander-in-chief of the Siamese 4th Army Corps (WO 106/62).

According to the official history of the Siamese Volunteers published in 1920, the volunteers disembarked from SS Empire at Marseille on 30 July 1918, welcomed by Commander of 15th Military Region (Marseille).

Extract from the Bangkok Daily Mail reported an arrival of SEF in Europe (catalogue reference: WO 106/62)

Siamese Aviators were sent to Flying School at Istres, and then to various specialised training school. Although training was not completed until the end of the war and the Siamese Aviators did not see any actions, they became the core of the Royal Thai Air Force.

The Siamese Transport units were sent to training schools at Lyon and Dourdan on 6 August 1918. By 24 September they were sent to Villemoyenne, about 50 kilometres from the front line, for further training.

The participation of Siamese armed forces in the Western Front led to Siam became one of the founding members of the League of Nations in 1919. They were successful in settling the unfair treaties with Germany and Austro-Hungary, followed by United States of America in 1920, Britain and France in 1924 and 1925. Siam was also rewarded with the confiscated German merchant ships.