Home > Blog > The passing of the 1967 Sexual Offences Act

The passing of the 1967 Sexual Offences Act

This Thursday marks a monumental moment: 50 years since homosexual acts between men were partially decriminalised; 50 years since the law recognised consenting adults’ right to same-sex relationships.

In this short blog series, we’ve tried to show that there was a surprising social scene available to LGBT+ people before partial decriminalisation, which thrived despite police surveillance and persecution.

As Sammy Sturgess’ blog explains, despite the Wolfenden Report’s progressive recommendations to decriminalise homosexual acts in private, legislation was not passed until 1967 – ten years later. This is contrary to the recommendations on sex work, which passed immediately into law under the Street Offences Act of 1959; this gave police more powers to arrest women on the street. In an era known for liberal social attitudes the law became more restrictive on women who sold sex.

Between 1957 and 1967, various organisations repeatedly petitioned the Home Office to try and effect changes in the law. The Campaign for Homosexual Equality (CHE) and the Homosexual Law Reform Society (HLRS) both put pressure on the government. The HLRS was founded on 12 May 1958, directly in response to the recommendations of the Wolfenden Report, to campaign for the decriminalisation. CHE was founded in 1964 by Allan Horsfall and others as the North Western Committee for Homosexual Law Reform.

The HLRS was particularly active between 1965 and 1967, when the Sexual Offences Bill was passing through the Houses of Parliament. This is reflected in the wealth of correspondence they have with the Home Office in this period. Through their charity arm the Albany Trust they sent publications to ministers in an attempt to educate them and ultimately to bring about change. 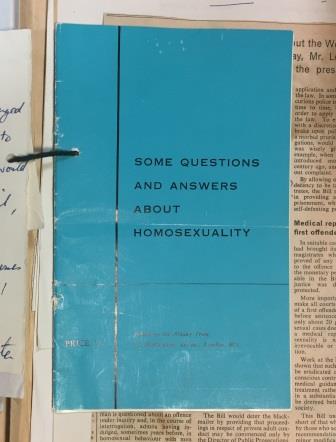 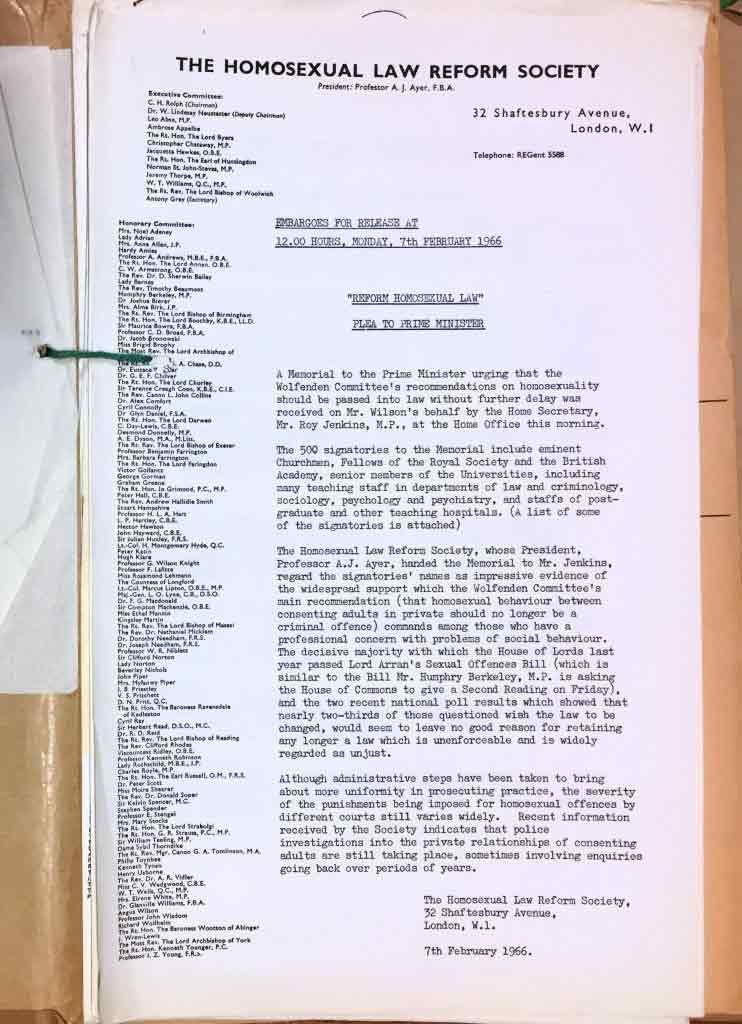 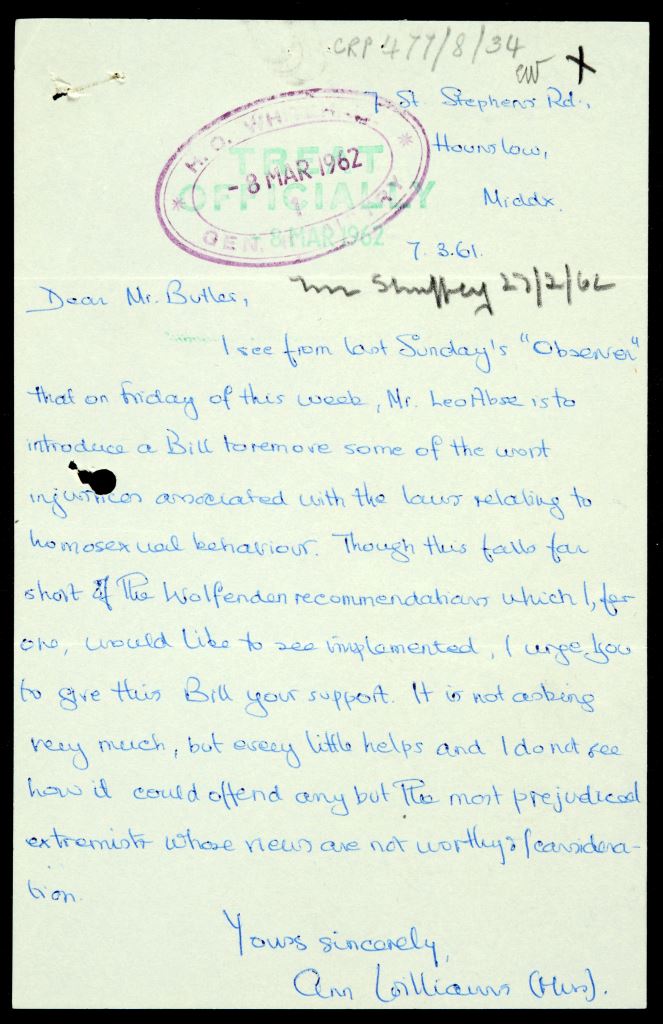 The HLRS relied strongly on heterosexual allies to help change the law. It was very different from campaign groups after 1967: while the law essentially criminalised homosexuality it was difficult for individuals to be ‘out’ and part of campaign groups centering openly gay and bisexual men.

Opposition to the law didn’t just come from campaign groups: individuals wrote to complain. In 1961, Miss Ann Williams wrote strongly in support of the bill claiming she:

‘could not see how it could offend any but the most prejudiced extremist whose views are not worthy of consideration.’

Despite slow reform there was increasingly support from both houses. In the 1960s, MP Leo Abse and Lord Arran pressured parliament and the Lords to debate a Sexual Offences Bill which would liberalise the law.

The Labour government, under Roy Jenkins as Home Secretary, collectively took a neutral position on a potential change of law, saying in 1966 that this was:

‘in the belief that its subject is pre-eminently suited to a private member’s measure, with all members free to vote according to their personal convictions.’ (HO 291/129)

A HRLS petition from 1966 urged the Wolfenden Committee’s recommendations on homosexuality to be passed into law. The 500 signatories to the memorial included churchmen, fellows of the Royal Society and the British Academy, senior university figures amongst others. Amongst the signatories is J B Priestley.

A National Opinion Poll extracted from the Daily Mail in October 1965 stated that 63% of people polled disagreed that homosexual acts in private should be criminal, although 93% believed that ‘homosexuals’ were in need of medical or psychiatric treatment (HO 291/127). This represented a huge change in the way society viewed homosexuality in this era, which had largely moved from moral opposition to a medicalised view. 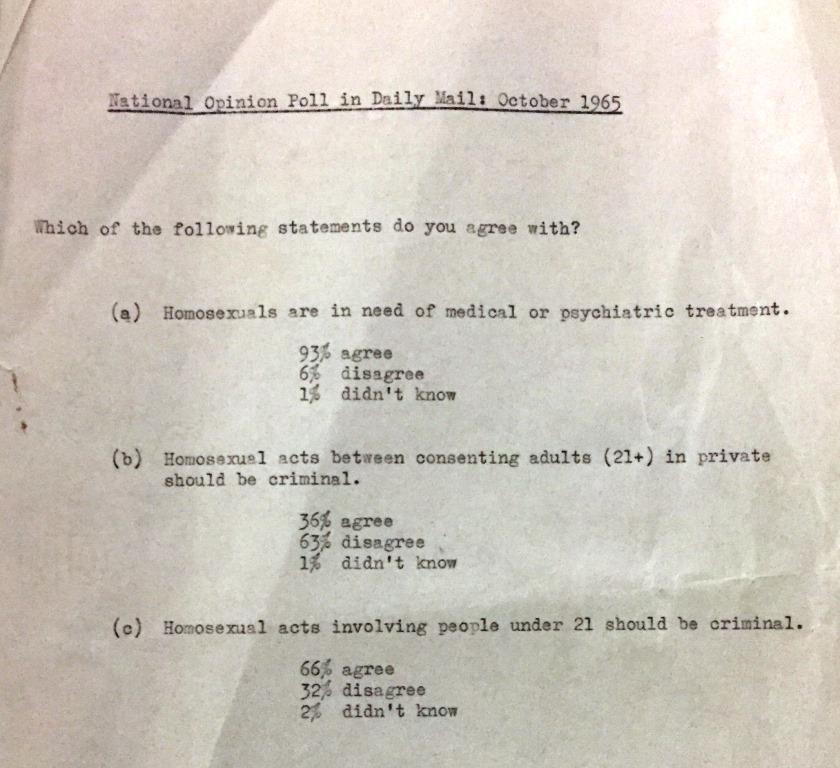 The Bill received royal assent on 27 July 1967 after an intense late-night debate in the House of Commons (the same week The Beatles’ All You Need is Love was at the top of the charts in the UK). Clearly this was a hugely significant moment in the history of liberation for gay and bisexual men.

However the reform was deeply limited. The 1967 Sexual Offences Act:

It would take until the 2000s for the age of consent to be equalised, and for lesbian, gay, bisexual and transgender personnel to be able to serve openly in the armed forces.

In many ways, the final framing of the law followed directly from the recommendations of the Wolfenden Report. Ultimately the Wolfenden Committee privileged certain voices and silenced others. While the committee spoke to three self-identified homosexuals, they were all from a certain social class and educational background. It has since been speculated that this was intentional, to increase the likelihood of the recommendations being accepted.

The final phrasing of the Sexual Offences Act reflected this focus on the ‘respectable homosexual’, emphasising that it was homosexual acts in ‘private’ that should be decriminalised. Arguably it was this focus on respectability that was the key to the success of law reform. However it ultimately meant many sexual relationships between men continued to be criminalised.

For this reason the impact of the legislation continues to be debated. Some argue that the change in law actually that the law raised public and police consciousness about what was considered criminal. Indeed our records show a huge increase in prosecutions from the mid-1970s (HO 522/7). A deputation from the Campaign for Homosexual Equality saw the Home Secretary in June 1976 to express their concern about the continued arrests of consenting adult men. 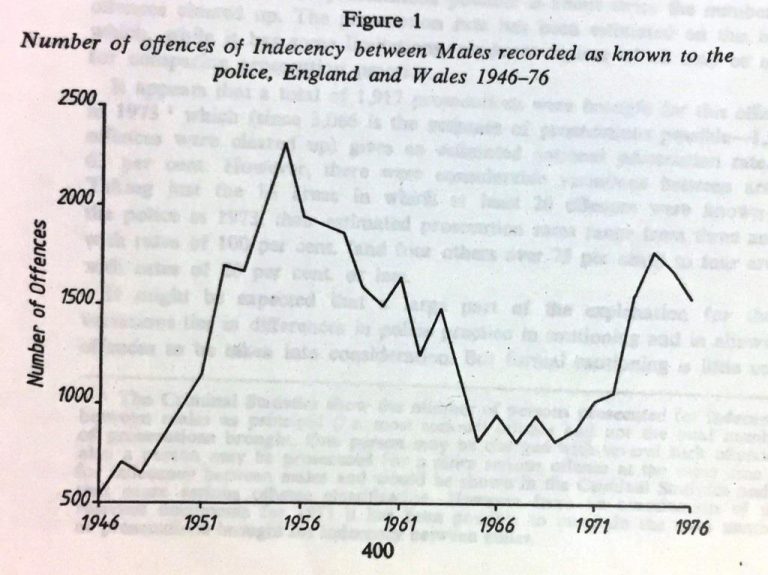 Table showing the number of offences of ‘indecency’ between males in England and Wales 1946-76, covering the period directly before and after the Sexual Offences Act was implemented (catalogue reference: HO 522/7)

There continued to be a discrepancy between the decriminalisation of homosexual acts and the continued policing of them, raising the question of how much the Sexual Offences Act of 1967 really changed the lives of gay and bisexual men.

While this reform was limited it certainly opened the door for further reform and generations of activists who continue to fight for equality.

50 years after the Sexual Offences Act received royal assent, Parliament flies the Pride flag during July: a poignant illustration of how much has changed in 50 years.

The long road to reform: the Wolfenden report