A series of unfortunate events

I have approached today’s blog post rather nervously because it’s by way of an experiment. In writing it, I have set myself a difficult task and only you can tell me how far I have succeeded. 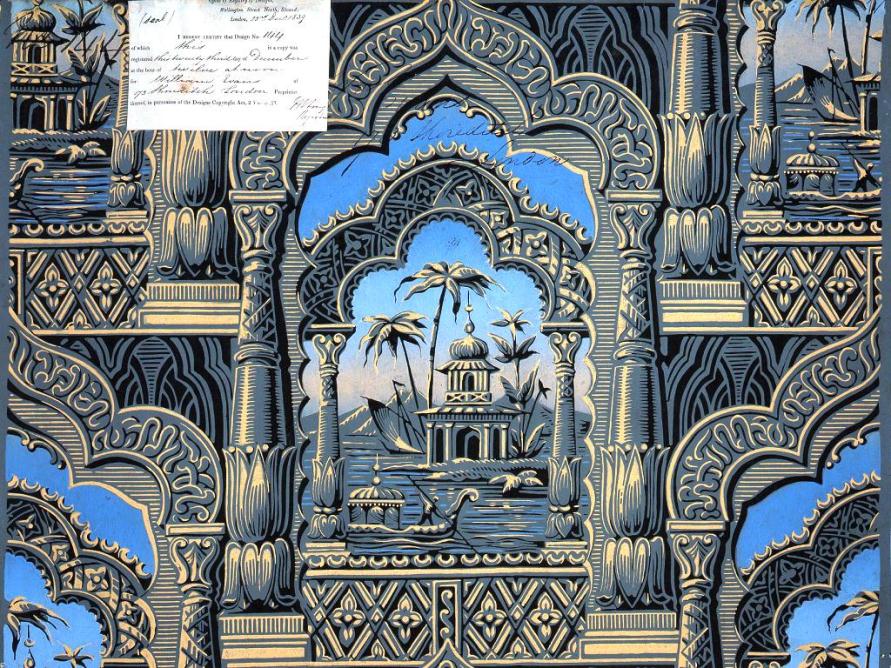 Wallpaper with a context. This design for wallpaper (catalogue reference BT 42/14/144) is part of a volume of registered design samples (BT 42/14), which in turn is part of a record series (BT 42). This series is part of the records of the Board of Trade and related bodies (department code BT).

My aim is to explain the concept of a ‘series’ of archival records in a way that is clear and useful, without either oversimplifying it or becoming too complicated and technical. 1 This is something that I have tried to do before, both as part of pre-prepared talks and ‘on the fly’ when answering questions in our reading rooms. Some of my attempts have been more successful than others and I think it’s time to seek some feedback on how I could improve my explanations. Constructive criticism is welcome! 2

Before I started writing, I looked at what some ‘classic’ authors, 3 a couple of 21st-century textbooks, 4 and some archive-related blogs 5 had to say about the subject, but these really only scratch the surface of what has been written before. 6

I have written this post as a set of Frequently Asked Questions, with my personal take on what the answers should (or could) be. Most of these are genuine questions that I have been asked at an enquiry desk in our reading rooms at least once.

A series means a set of records of the same type and the same origin. 7 Slightly more formally, it means a sequence of records with a relationship resulting from a shared history of creation, storage or use. 8 Typically, historical records in the same series either document the same activities or functions, or were created as part of the same filing system or process (or both of those things).

Are records in the same series always pretty uniform?

Not always. Some series consist of records that are all very similar to one another. Others are more miscellaneous in format or content. Some are entirely ‘natural’ – made up of records that have always been kept as a set or sequence – and others have been arranged (or reconstructed) by archivists. 9

Some series contain thousands of records and others only a few. Some contain records created over centuries and others cover a much shorter time period.

Why do archivists bother organising records into series?

It’s in the nature of archives that they normally come as sets of related records, not isolated single items. The value of records as historical or legal evidence very often comes from their collective nature and from their context – what we know about how and why they were originally created and used – as well as their content.

When organising records, archivists try to follow the ‘principle of provenance’, meaning that we group them together according to where they came from.

Particularly in the case of records originally made by larger organisations – such as the UK government bodies whose records we hold at The National Archives, or some businesses – this tends to involve multiple layers of sub-groupings. All records created by the same organisation are grouped together, and divided into progressively smaller units. 10 As far as possible, these layers, generally called ‘levels’, reflect either the administrative structure or the functions of the organisation. 11

This simplified diagram shows the place of the catalogue description for the design BT 42/14/144 in relation to other catalogue entries.

Series are traditionally a mid-level layer. 12 Here at The National Archives, we normally distinguish at least three levels in our catalogue descriptions: department 13 (the records of a government body or a group of related bodies), series and piece 14 (the individual files, boxes, volumes, rolls, datasets, etc making up a series). Sometimes we include additional levels too.

Why are some series organised in date order, others in some sort of alphabetical order and others in random order?

One size doesn’t fit all. Many decades of collective experience have taught archivists that sorting everything into, say, date order for the sake of it isn’t a good idea.

Where possible, archivists follow the ‘principle of original order’, which means keeping the records within each series in the same sequence as they were maintained before they came to the archives. This is part of trying to preserve the context of the records.

Quite often archivists encounter records without any ‘original’ order. In these cases we have to devise a sequence that makes sense in terms of the content. The order of records within a series is never entirely random!

Wouldn’t it be easier just to group records together by subject? 15

Absolutely not. As well as having the disadvantage of destroying the context, this would be an unnecessary waste of time and effort. As many records reflect several different subjects, trying to organise records by subject would simply make a few topics easier to research and others a lot harder.

Archivists also try to be as unbiased as possible when arranging and describing records. 16 Organising records to reflect their origin and how the original creator kept them is the best way to allow them to speak for themselves.

It’s also worth remembering that records in the same series are very often about the same subjects as well. If a set of records had no subject matter in common, it’s unlikely that they would have been created or used together originally.

Does the system of catalogue references match how records are arranged into series?

Yes, our citable references at The National Archives follow the organisation of the records quite closely. Most other archives also use referencing systems that reflect how the records arranged, at least to some extent.

For records held at The National Archives, the letters in the catalogue reference signify the department and the first set of numbers normally indicate the series. Subsequent sets of numbers (separated by forward slashes) refer to pieces, and sometimes even to items within those pieces (such as specific letters within a bundle of correspondence).

Do I really need to know about series to do research using archives?

A qualified yes. It’s not necessary to understand what a series is to do some straightforward kinds of research, such as finding a person in a census returnby searching online. For anyone studying more complicated or open-ended topics, though, an awareness of the fact that records come in series is absolutely essential. 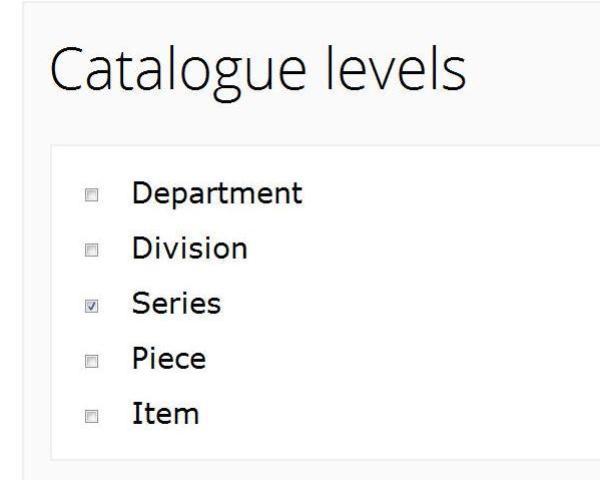 My experience is that researchers usually find the process of using archives easier and more effective if they have at least a basic understanding of a few technical terms (like series) and the principles behind how they work. 18

Can I use your catalogue to search just for series that I might like to investigate in more detail?

Yes. The advanced search screen of Discovery, our catalogue, includes an option for doing just that. Scroll down to the heading ‘Catalogue levels’ and click on ‘Show options’.

The catalogues of other archives often allow you to do this too, although the mechanics of doing it may be quite different.

Another way to identify series of records at The National Archives that may be relevant to your areas of interest is to use our online research guides.

Can I also use your catalogue to search just for records within a particular series? 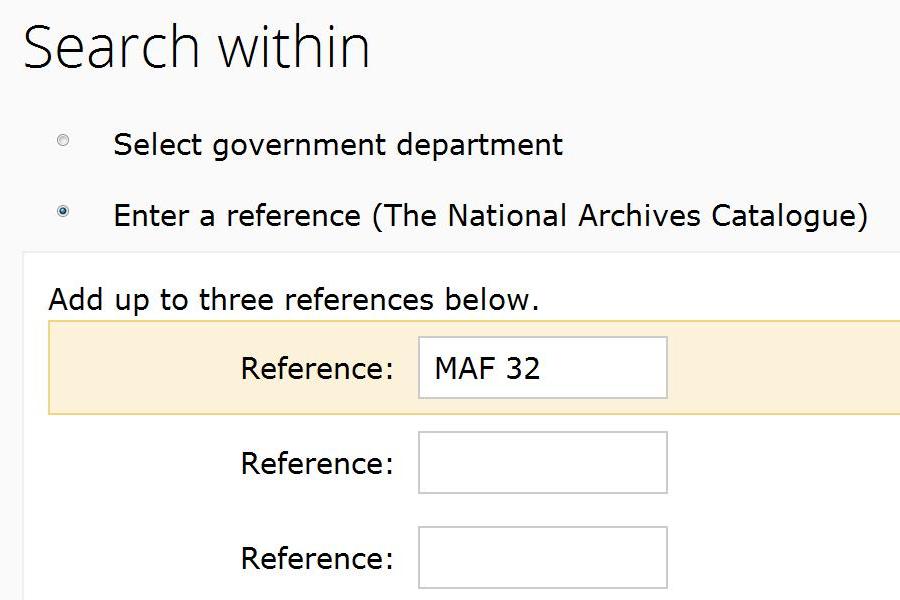 Using the advanced search screen to search for records within series MAF 32.

Yes. You can use the advanced search screen to do this too. Scroll down to ‘Search within’.

You can also include series references in a basic search (for example, Kew AND “MAF 32”). This is often quicker but less precise.

Again, the catalogues of many other archives will allow you to do something similar.

One last question: are series always about unfortunate events?

No, of course not. I thought that the allusion was worth making, though, and not just because so many records relate to unpleasant things, such as the ever-present death and taxes, 19 in some way.

When I borrowed my title from a popular sequence of books, I did so for a reason. Records that are arranged by provenance form a kind of story: the histories of how they were created and of the people or organisations that made them. As I mentioned earlier, the principles of arrangement adopted by archivists are those that best allow the records to speak for themselves.

Records also contain other stories: the interconnected histories of people, places, events and ideas. When people use archives for research, they typically look at several (or many) different records. It is organising records to reflect the context of their origin that best allows researchers to understand them, to assess their relevance, and to or uncover the stories of the past.