The words allegedly given by Private Thomas Highgate to a French civilian on 6 September 1914, having deserted the 1st Battalion, Royal West Kent Regiment. 100 years ago today he became the first British soldier to be executed during the First World War.

During the centenary commemorations there will be many difficult and sensitive topics that will be encountered by researchers. Soldiers executed as a result of an act or acts of ill-discipline is just one such topic; a topic which is obviously still a very sensitive one. This blog aims simply to showcase the WO 71 Courts Martial proceedings papers that are open to the public regarding this topic and how working between different records can add to our perspective of the stories that we uncover. 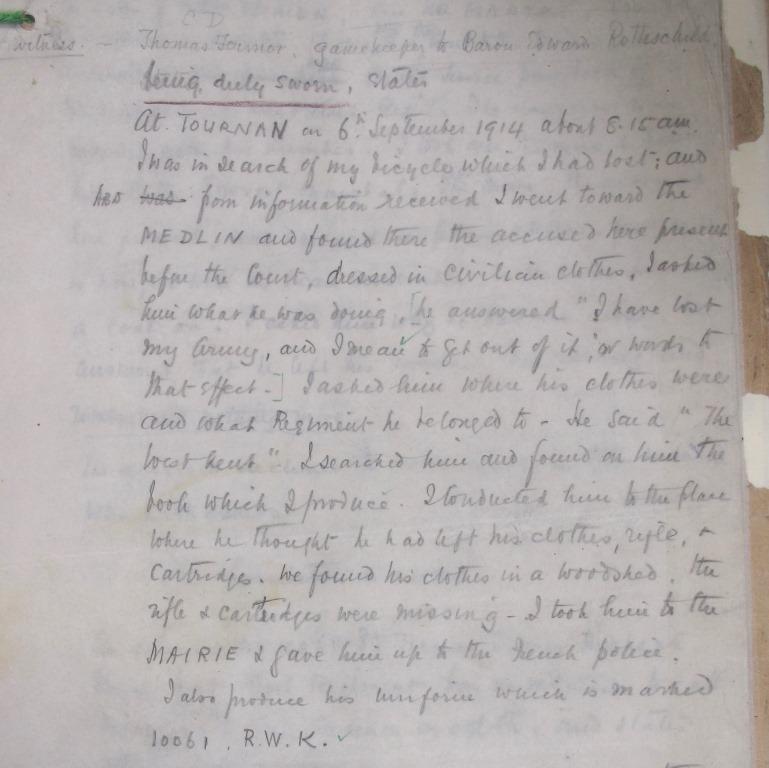 WO 71 387: Witness statement of Thomas Fermor, who discovered Private Highgate in a farmhouse

The proceedings papers contain the various documents compiled before, during and after the courts martial was convened. Included will be a mix of correspondence regarding the case, witness statements, and details regarding the sentencing. Additionally, the file for Thomas Highgate, as with all First World War executions for desertion or cowardice, now contains an official pardon which was added by the Ministry of Defence in 2007. The records are original paper based documents, searchable by name of the accused via our online catalogue, Discovery, and can be viewed in our reading rooms or copied by our record copying department.

When Highgate was captured, critically, he was discovered in a small farmhouse, dressed in civilian clothes and without his rifle. When questioned directly by the court, Highgate could not say why he was in civilian clothes. He stated that having lost his regiment he:

‘got strolling about, went down into a farm, lay down in an empty house, and have a slight remembrance of putting some civilian clothes on, but do not remember exactly what happened until the man came down to arrest me’ (WO 71/387).

Likewise, Captain Milward, who had escorted Private Highgate into military custody, described to the court that Highgate had said to him he ‘remembered nothing’ except leaving his bivouac that morning (WO 71/387).

Interestingly, Private Highgate’s service record, a completely separate record collection which is available to view on the Ancestry website, reveals not only a history of desertion prior to the outbreak of war in August 1914 but also a history of memory loss. The Statement of Services sheet in his service record lists a desertion from 28 February 1914 until 4 May, with a signed confession attached confirming that Highgate had attempted to fraudulently re-enlist into the Army at Woolwich. His Army employment sheet records that he was ‘continually absent’ but ‘a good worker’ while he is also recorded as being absent from Tattoo on 7 September 1913 and 1 July 1914 (WO 363/H1561 – Private Thomas James Highgate, 10061, 1st Battalion, Royal West Kent Regiment).

Fascinatingly, a memorandum regarding Private Highgate from June 1914 from Captain Tate, Medical Officer at Richmond Barracks, Ireland, to the Adjutant of the 1st Battalion, Royal West Kent’s, states:

‘I have spoken to this man and find his memory good at present. His history of two shipwrecks [Highgate had been a seaman before joining the Army], a fall from a loft and yellow fever on W[est] coast of Africa would amply account for occasional lapses of memory. His manner is stated to be peculiar at times’ (WO 363/H1561 – Private Thomas James Highgate, 10061, 1st Battalion, Royal West Kent Regiment). 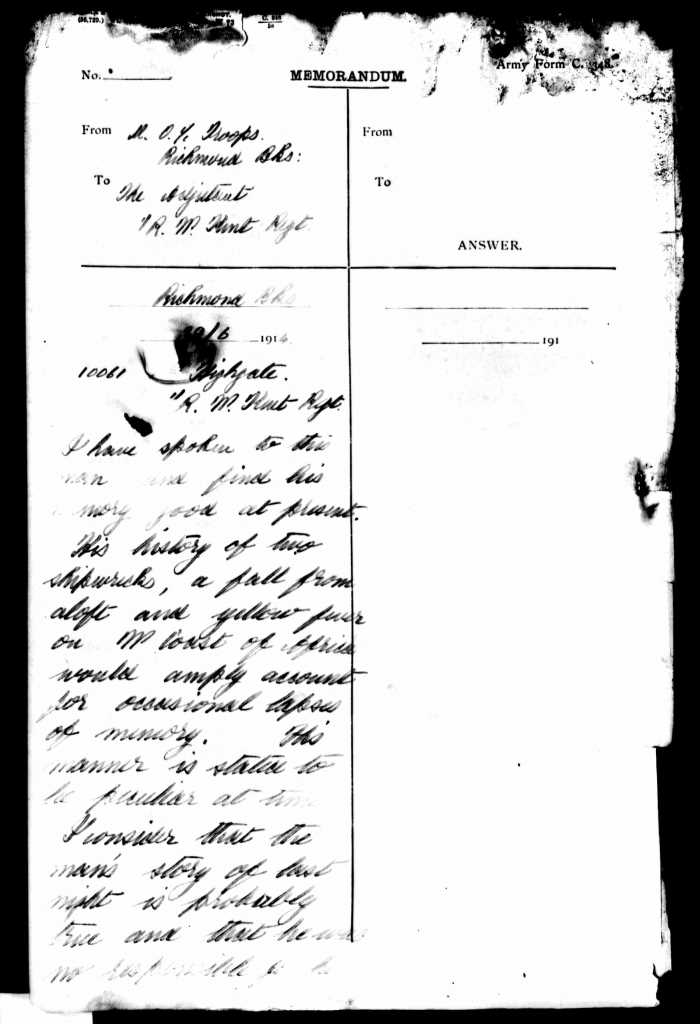 Private Highgate was found guilty of desertion on the 6 September 1914, the day of his arrest. A death sentence was passed but like all such sentences needed to be confirmed by the Commander in Chief. It was during this confirmation process that the majority of death sentences were commuted to lesser sentences during the First World War. Gerald Oram and Julian Putkowski list that between 1914 and 1920 only 361 men were executed from the 3060 cases where a death sentence was initially given – about 11% of cases. 1

Unfortunately for Highgate, there was no such reprieve and the death sentence was to be carried out ‘as publicly as convenient’ (WO 71/387). And here is a key point when analysing death sentences in the British Army. It was not necessarily just about punishing one serious act of ill-discipline, it was also about considering the wider disciplinary concerns of the respective battalion, brigade, division or even Army as a whole, and then setting an example as a result.

In Highgate’s case, his desertion and trial came at a time when the British Expeditionary Force (BEF) were in retreat; a period which saw many men become detached from their battalions, rifles and equipment lost, and even reports of looting. The Unit War Diary of the 5th Division Headquarters records the need stop and pick up ‘stragglers’ on 29 August and 1 September (WO 95/1510/1), while the diary for the Assistant Provost Marshal, 5th Division, reports straggling, robbery, looting, two soldiers without their rifles and riding with civilians, and even one allegation of rape during the last week of August and first week of September (WO 154/33). 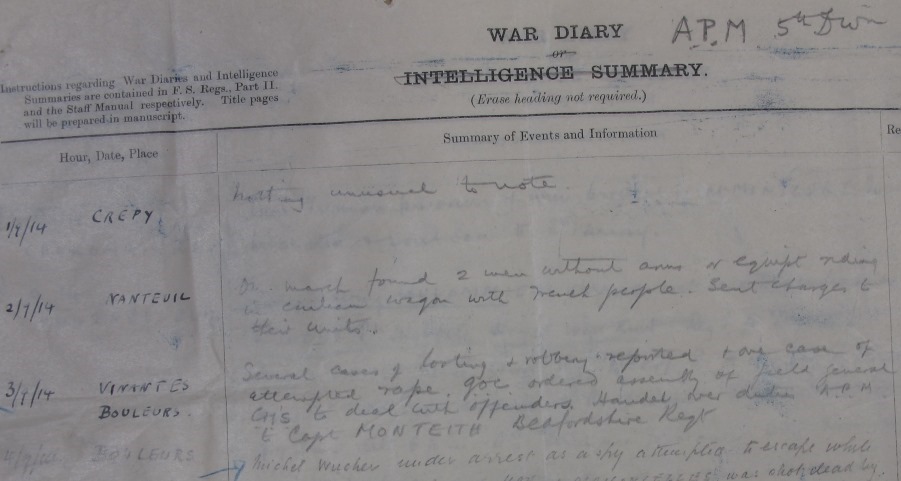 Private Thomas Highgate was one of only two men from the West Kent Regiment to be executed during the First World War and the first in the British Army during this conflict. The centenary will contain many sensitive topics, such as this, some of which will still divide opinion. As with all historical periods, discovering sensitive events can be upsetting for living relatives. By piecing together the different records that do survive, however, researchers can gain a better perspective of the stories that they unearth.