I have seen yesterday, I know tomorrow… 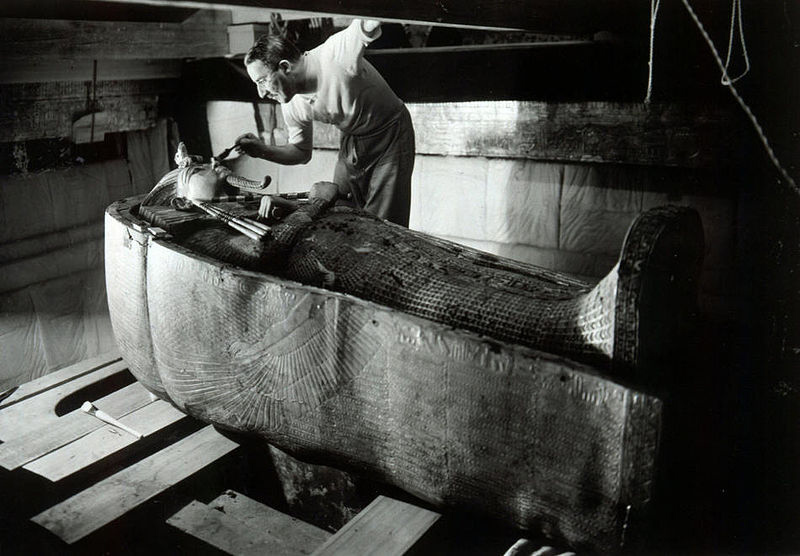 My colleagues are already tired of my obsession with Ancient Egypt, but today at least, I have an excellent reason to raise the subject again.

75 years ago, on 2 March 1939, Howard Carter died in relative anonymity; today, outside of the rather restricted egyptological circle, his name raises more eyebrows than enthusiastic comments. And yet, in 1922, he made a discovery that echoed down the corridors of archaeology, THE discovery – the virtually intact tomb of Tutankhamun. Incidentally, 1922 was also the year during which independence was unilaterally bestowed upon Egypt by Great Britain, which inextricably linked Egyptology to politics.

It all started in the Valley of the Kings… This is, of course, a place full of magic, evocative of ancient mysteries and riches – and, as one of my colleagues pointed out not too long ago, of peripatetic mummies out of bad American films! Yet, it is also difficult to find a more remote, barren, scorching hot, unpleasant locality. 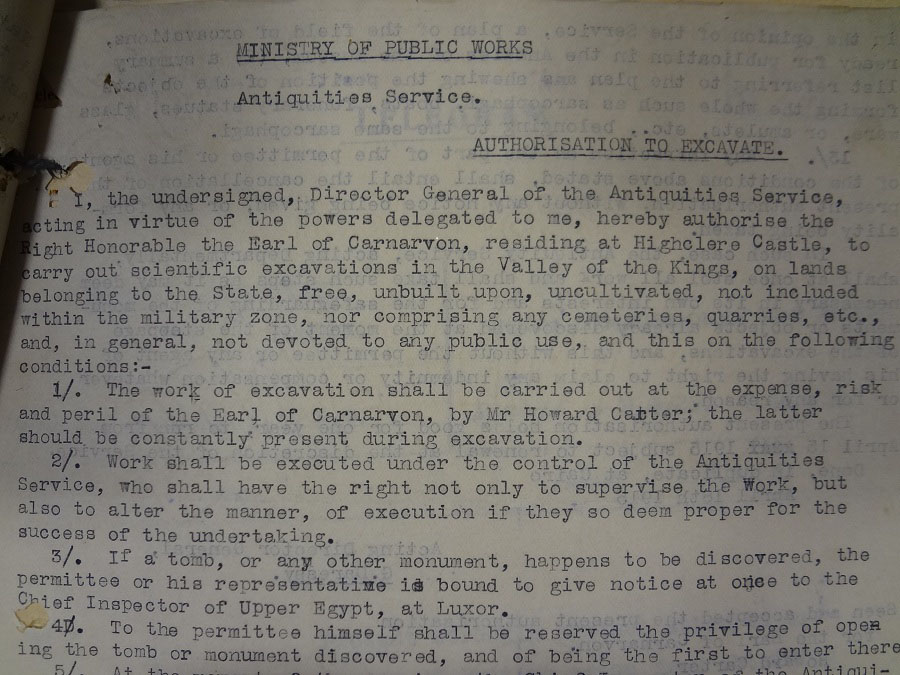 Howard Carter and his sponsor, George Herbert, 5th Earl of Carnarvon were given permission to dig in the Valley of the Kings in 1915.

Carter went through a series of rather frustrating, fruitless seasons until he could finally write in his diary, held at the Griffith Institute , “entrance of tomb of [blank]

On 6 November, he sent one of the most famous telegrams in (egyptological!) history: “At last have made wonderful discovery in the Valley. A magnificent tomb with seals intact. Recovered same for your arrival. Congratulations. Carter.”

It would take Howard Carter and his team about 10 years to excavate the tomb entirely; for the sake of scientific accuracy and caution, obviously, but also because a wave of Tutmania swept the entire planet, firing the imagination of the world, reviving centuries of endemic hostility between France and Great Britain on the banks of the Nile, and fuelling nationalist discontent. 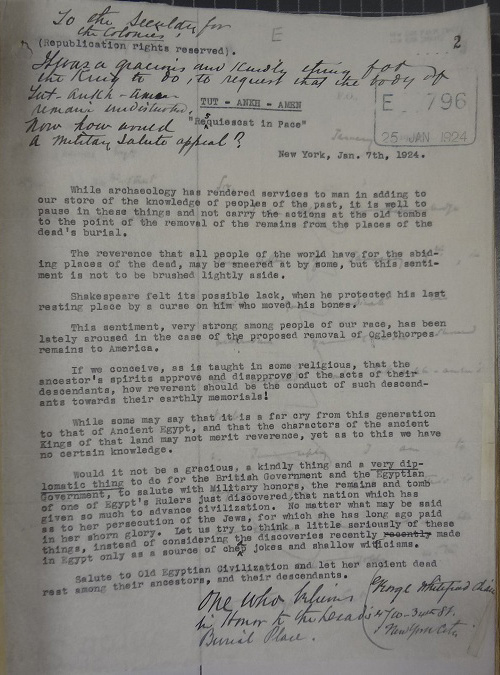 "Would it not be a gracious, a kindly thing and a very diplomatic thing to do for the British Government and the Egyptian Government, to salute with Military honors, the remains and tomb of one of Egypt's Rulers just discovered" FO 371/7733

Carter had to contend with a constant stream of visitors (some applications can be found in FO 371/7733 and FO 141/483/1), many of whom were stimulated by a kind of morbid curiosity partly fostered by the rumours of an ancient curse leading to the death of anyone getting too close to Pharaoh. I’m sorry I’ll have to disappoint you there – Admittedly, Lord Carnarvon died on 5 April 1923 in the Continental Hotel in Cairo (the lights flickered, they said, his hound in Highclere Castle howled at the precise moment of his death…), but curses were, at best, infrequent in Ancient Egypt and one cannot help but notice that Carter died many, many years after having disturbed Tut’s rest. Everyone, however, is sensitive to the fantastic, and the tomb of Tutankhamun became the focus of esoteric theories and very strange suggestions such as this one, from an American: ‘Would it not be a gracious, a kindly thing and a very diplomatic thing to do for the British Government and the Egyptian Government, to salute with Military honors, the remains and tomb of one of Egypt’s Rulers just discovered’ FO 371/7733.

The Eastern Department of the Foreign Office dismissed it with a casual “external evidence would point out to his being the possessor of a weak mind,” but it’s a good example of what Carter and his team had to deal with. 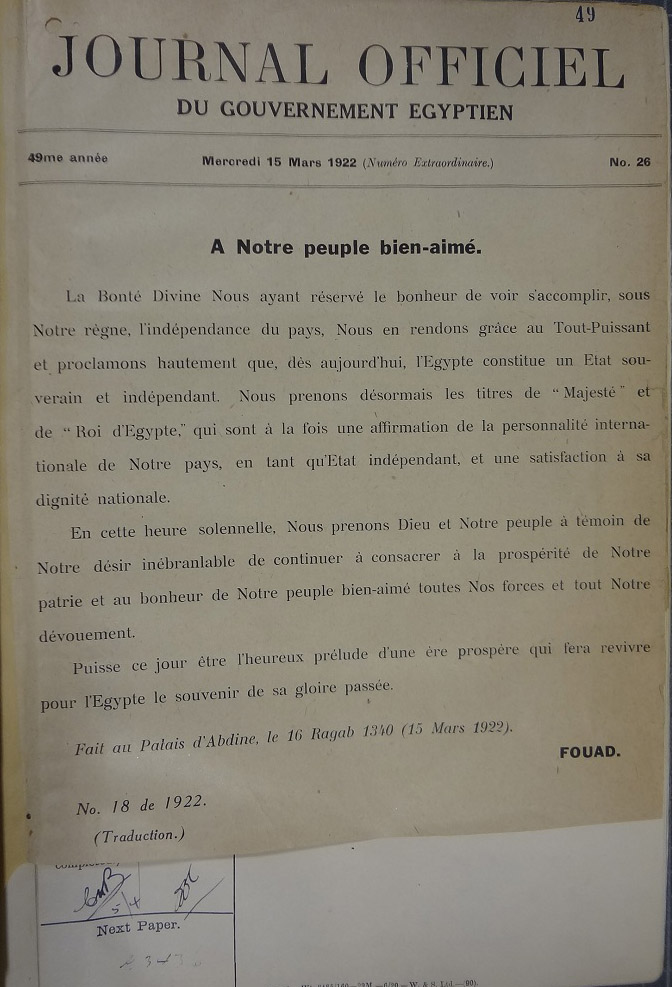 Intrusive tourists, though, were probably not as annoying as the interference from the director of the Antiquities Service, Pierre Lacau.

When France and Britain had signed the Entente cordiale in 1904, it had indeed been determined that “the post of Director-General of Antiquities in Egypt shall continue, as in the past, to be entrusted to a French savant”; Egyptology therefore remained a French prerogative, a prerogative Lacau was not ready to let go. Tutankhamun portrayed to the French the image of an egyptological scene on which, suddenly, the British took the lead role, of a science which, unexpectedly, had ceased to be French. Lacau, without actually doing anything against Carter, certainly didn’t help, and proved inflexible in his conviction that the treasure as a whole should remain in Egypt. Carter, who had a reputation for being quick-tempered and petulant, proved just as inflexible in his conviction that Lady Carnarvon should at the very least get financial compensation. 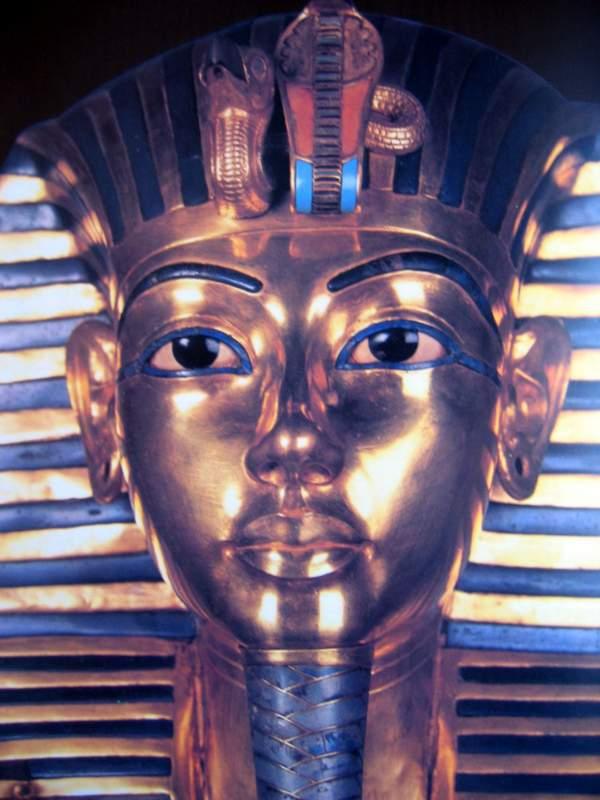 Unfortunately for Carter, Lacau was backed by the young, nationalist Egyptian government, eager to extricate Egypt from a European imperialism which had reached as far as the remnants of its ancient history. In February 1922, Lord Allenby, High Commissioner in Egypt, had sent Sultan Fuad a Declaration to Egypt  stating: “The British protectorate over Egypt is terminated, and Egypt is declared to be an independent sovereign state”. In March, the Sultan had been proclaimed King under the name of Fuad I. In his message to the nation, the King wished that the constitutional change might be seen as “the promising start of a prosperous era which shall restore to Egypt the memory of her glorious past”.

Immediately adopted, Tutankhamun, representative of the power and magic of Ancient Egypt, a symbol of geographical consistency and historical continuity, crystallised the hopes of a nation which found it difficult to keep pace with its new status. As recounted in the Foreign Office file, which I can only urge you to read as it’s better than any Kafkaesque story, Carter and Carnarvon had made a major political blunder by giving an exclusive to The Times, and the Egyptian Minister of Public Works did his best to drive him away from the tomb. Things went so far that Carter closed the tomb altogether in February 1924, which proved another error of judgement, not only because he chose to ignore the change in Egyptian politics, but also because he had left the upper part of the sarcophagus dangling at the end of ropes which might have snapped. Lacau seized the tomb on behalf of the Egyptian Government.

So, whatever some people might think, there was more to Carter’s story than an archaeologist hitting gold… I wonder what Tutankhamun would have made of the political intrigue and squabbling over the discovery of his tomb…  Most likely he’d have shrugged and said those words engraved on the wall of his golden shrine, I have seen yesterday, I know tomorrow…