Seeking protection from gas warfare in 1915

‘Complexion here was an ashed blueish grey, the expression most anxious and distressed with the eye-balls staring, and the lids half closed. Respiration was extremely laboured and noisy with frequent efforts to expel copious amounts of tenacious yellowish green frothy fluid which threatened to drown them, and through which they inhaled and exhaled air into and out of their lungs with a gurgling noise.’ 1

This distressing statement comes from Captain Edward L Reid of the Royal Army Medical Corps, serving with No. 7 Field Ambulance in May 1916. Reid is describing just some of the horrific sufferings experienced by soldiers with gas poisoning during the First World War. As part of our ongoing medical technology series of blogs, today’s post will examine some of the earliest developments made by the British Army in 1915 to try and combat the dangers posed by this new weapon. 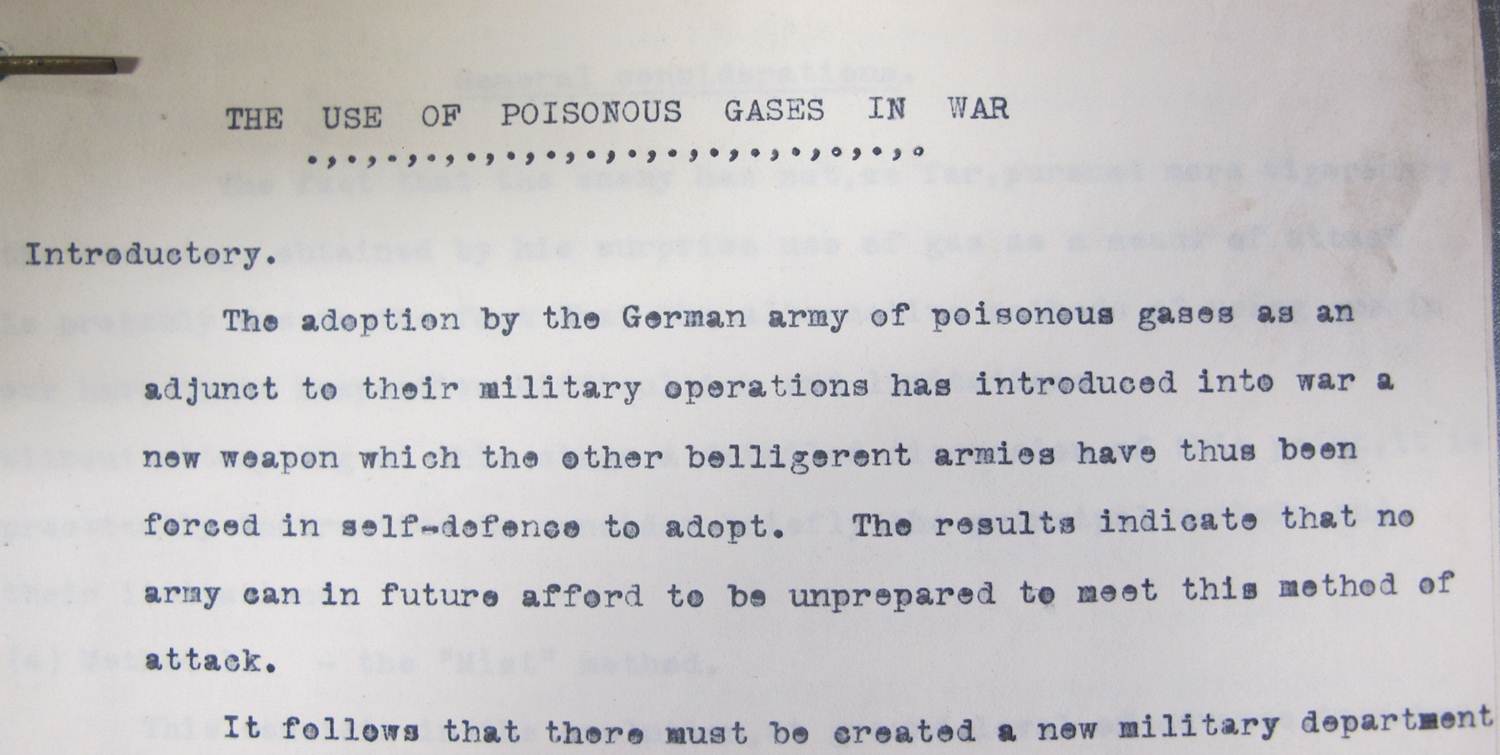 Opening paragraph from The Use of Poisonous Gases in War report made by the Royal Army Medical College in June 1915 (catalogue reference: WO 142/183)

Within the Chemical Warfare Department series in WO 142, you can find a subseries of papers titled Anti-Gas files. Within file 4, there’s a report titled ‘The Use of Poisonous Gases in War’ from June 1915. The report describes five essential requirements of any gas protection device for troops:

2. Protect the eyes from disabling irritation.

3. Be capable of rapid and secure adjustment by unintelligent men.

4. Afford minimum interference with fighting capacity by obstruction of respiration, vision or hearing.

5. Be of a type sufficiently simple to be made cheaply, rapidly and in large numbers by unskilled labour.’ 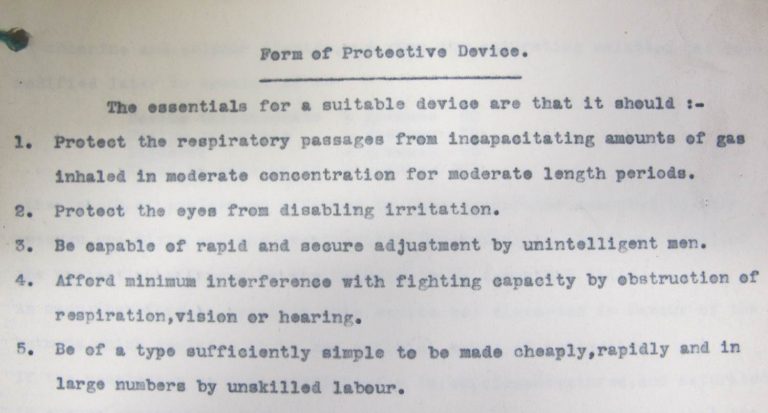 The initial respiratory protection is described quite plainly as ‘a pad of cotton waste wrapped in black veiling’ which was ‘approximately the size of a hand’. Folds were included so to offer protection of the eyes, as were anti-gas goggles. This pad was to be dipped in a solution that would absorb the gas being used by the enemy (chlorine). Unfortunately, it was found that when using this pad, men were ‘incapacitated’ within five minutes by respiratory and eye irritation, at a time when the Army Medical Service was seeking protection for at least 20 minutes. Consequently, the report confirms that the cotton pad failed to comply with the first four of the above essential requirements. 2 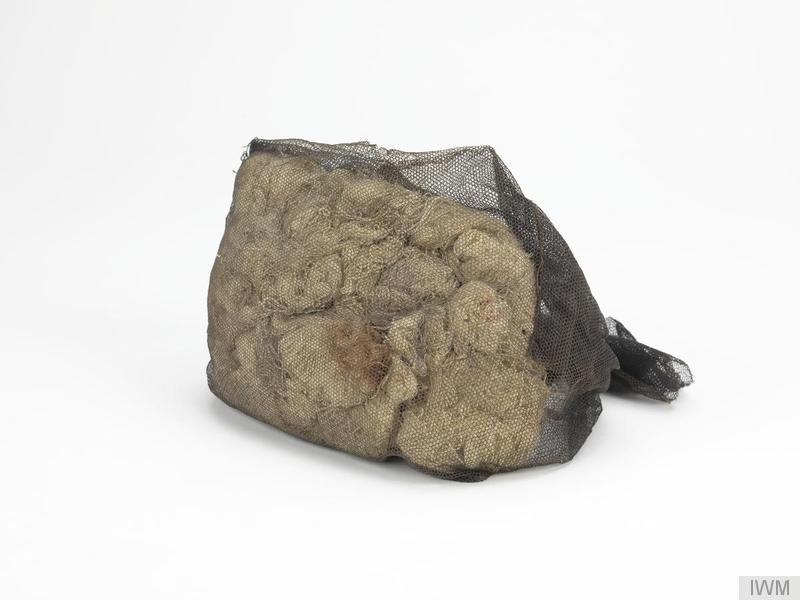 Developments led initially to a face mask made of textile with a fitted pad opposite the mouth. Celluloid eye pieces were incorporated with purse string elastic to provide adjustment over the forehead and under the chin, with an elastic band to fit over the back of one’s head. This face mask idea quickly moved towards a full helmet based respirator design, which was introduced in May 1915. The RAMC report continues:

‘The helmet consisted of textile, the two or later three pieces of which were securely sewn together by a single seam of cotton thread, a celluloid window being inserted in the situation of the eyes. It was large enough to fit over the service cap and come well down over the shoulders, the skirt being tucked beneath the collar of the tunic or shirt which is then buttoned over it. The external surface was 3¼ square feet.’ 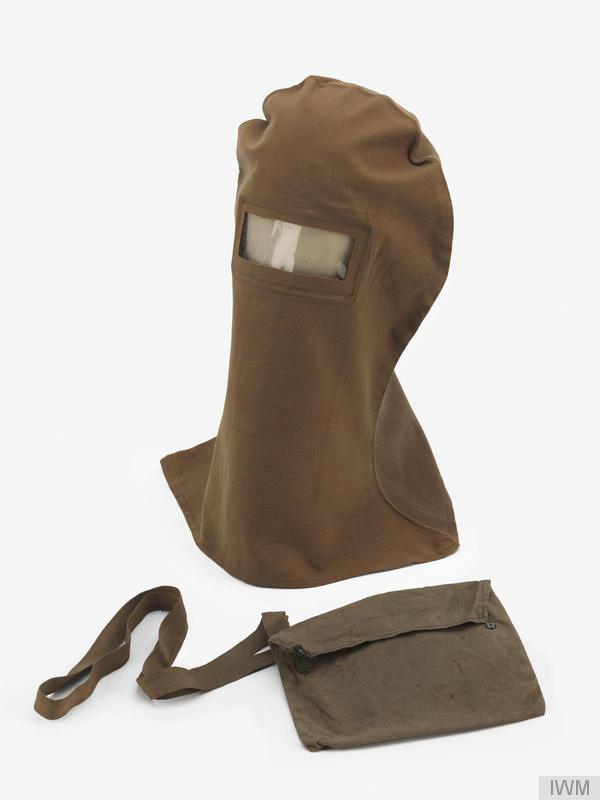 Developments from the initial pad design led to a textile helmet that covered the whole head. © IWM (EQU 3913)

Despite fears of possible asphyxiation by carbon dioxide exhaled by the wearer of the helmet, early tests showed men could remain in their helmet for three hours in an atmosphere containing gas, as well as being able to run ‘a quarter of a mile with the helmet securely adjusted’.

By September 1915, the British Army felt ready to launch their first gas attack as part of the Battle of Loos. Using the experiences of the 15 Infantry Division and 46 Infantry Brigade, however, we can clearly see the tragic difficulties when deploying new weapons and protective devices in combat situations.

The War Diary of the 46 Infantry Brigade Headquarters reveals ‘misgivings’ as to whether the wind strength was sufficient to push the British gas towards the German positions on the morning on the 25 September, the opening day of the battle. Subsequently, ‘a considerable number’ of British troops are noted as having been gassed by their own gas as they assaulted the German lines. 3

The 12 Highland Light Infantry was one such Battalion affected by unsuitable wind conditions. Lieutenant Colonel J H Purvis, commanding the Battalion, reported that ‘many of A Company’s men suffered from the effects of our own gas before leaving the trenches’. Captain P W Torrance elaborates further, revealing that ‘two (or three) of the gas cylinders burst and several more were leaky’ resulting in many gas casualties before the attack had even been launched. 4 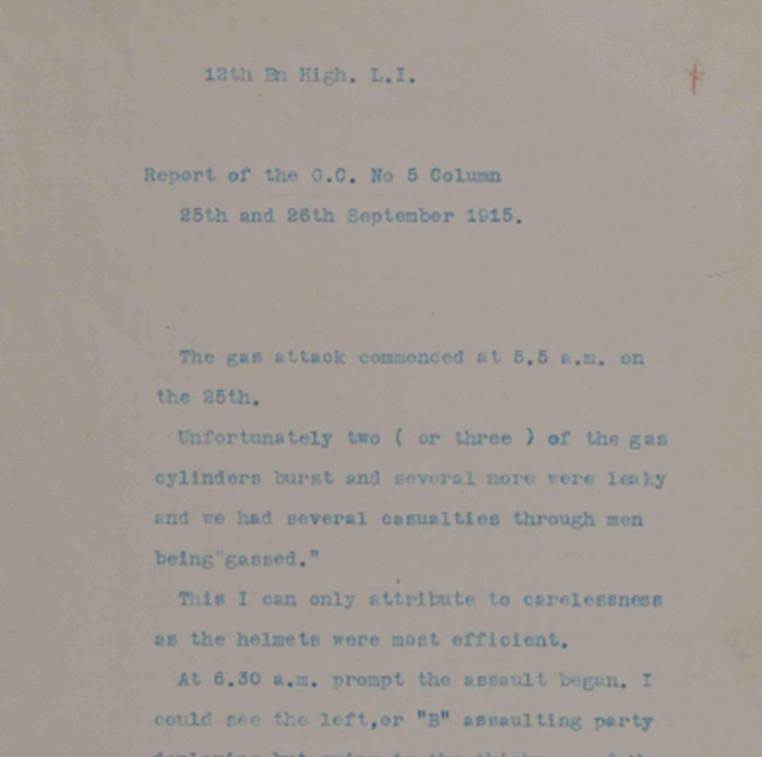 While Captain Torrance blames carelessness of the soldiers for the primary reason for suffering gas poisoning as the offensive began, The Official History records some of the practical difficulties experienced on the 25 September. Firstly, the early morning rain caused the protective chemicals that the helmets had been soaked in to ‘soak out and irritate the eyes’ of the troops. For others breathing became difficult when advancing towards the enemy, resulting in ‘many men’ removing their helmets and subsequently suffering the effects of gas poisoning as a result. 5

So, again we see a continuing pattern of the First World War initiating new weapons, which leads to new protective measures or medical technologies to aid people caught up in the conflict. In the case of gas protection, such designs came to rely more heavily, at least initially, on battlefield exposure rather than by extensive laboratory testing. While protective gas respirators became more sophisticated and consistent as the war progressed, unfortunately for some, as the events at Loos 100 years ago show and as the opening statement vividly reveals, sometimes medical protection can only go so far in modern warfare.