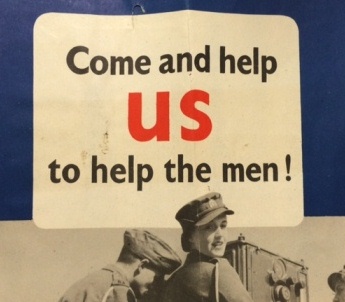 Records of over 5,000 Second World War civilian gallantry awards have just been published online for the first time by Ancestry, in association with The National Archives. I wanted to share some of the amazing stories that caught my eye – including an 11 year old facing down a bomb.

The UK WWII Civil Defence Gallantry Awards, 1940-1949 collection (file series HO 250) reveals the name, age and location of those who risked, or even lost, their lives to save others while protecting the home front.

While thousands of men fought across the world during the Second World War, more than 1.9 million civilians served as Civil Defence Volunteers back home on British soil. Some worked as air raid wardens, first aiders and firewatchers, but some were ordinary civilians who showed incredible bravery in the face of disaster.

This collection reveals the gallant actions of over 200 children. The youngest was just 10 years of age – Royston Newman, a boy scout from Tonbridge (HO 250/18/750). Newman acted as a human shield to protect his baby brother from bomb explosions, after seeing a neighbour killed in front of his eyes.

Account of the incident that led to Royston Newman being given a Civil Award for Gallantry (catalogue reference: HO 250/18/750)

Also included is 11-year-old Raymond Hawley from Amersham, Buckinghamshire (HO 250/23/967). When a bomb penetrated the roof of his home, Raymond ran upstairs to investigate, seized a pair of trousers and smothered the bomb with them. He then carried it downstairs and threw it into the garden. His actions protected his disabled mother and four siblings who were in the house at the time.

The oldest person who appears in the records is 95-year-old Lillian Halle from Kensington (HO 250/11/578), a ‘tiny, frail-looking woman’ who put out a fire from an incendiary bomb in her house by herself, tearing down burning wallpaper with her bare hands.

This record also reveals a great deal more about the life of Lillian Halle and her strength of character. She had an adventurous life: she had crossed the Atlantic 16 times, been round the world three times and crossed the Sahara on a camel. She encountered a few disasters along the way including being shipwrecked, and a big fire in New York. All of these adventures must have equipped her with the bravery and courage she displayed during the Blitz. 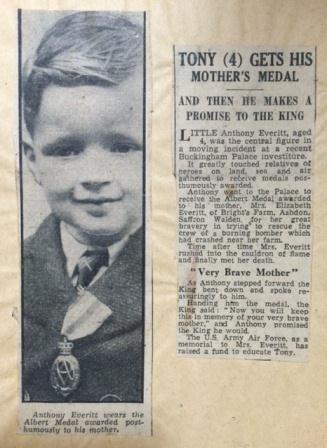 Other female civilian heroes featured in the records include 39 year old Elizabeth Anne Everitt, from Ashdon in Essex (HO 250/93/2167A). When a plane crashed near her home, Everitt ran out to help, coming to the aid of several injured men. While searching the plane for other personnel, ‘a violent explosion occurred’, which killed Everitt and her dog, who was with her, instantly. Her husband had died a few months before, and her death meant that her young son (age 4), was sadly left an orphan. Everitt was posthumously awarded a medal at the bequest of the Prime Minister. Her son Tony was presented with the award at Buckingham Palace.

In the line of duty

Also included is Albert Ernest Dolphin (HO 250/4/256). At the start of the Blitz in September 1940, Albert was working as a porter at the South Eastern Hospital in New Cross, London.

When a bomb fell on the hospital, Dolphin found a nurse pinned down by a block of masonry, and when a nearby wall collapsed Dolphin ‘threw himself across [the nurse] in an endeavour to protect her, which he succeeded in doing at the cost of his own life.’ Dolphin was awarded the George Cross for his gallantry – the highest award that can be awarded to a civilian.

You can explore bombsight.org, which maps online where the bombs fell in London during the Blitz.

All this is thanks to the work of volunteers as well as staff at The National Archives, who add huge amounts of data to make the records searchable online. Conservators at The National Archives carry out preservation work to protect the documents so that family history websites, such as Ancestry, can photograph and digitise thousands of pages to add online.

It is this work behind the scenes that makes it possible for people across the globe to see these amazing original records and discover the many fascinating stories of the home front during the Second World War. 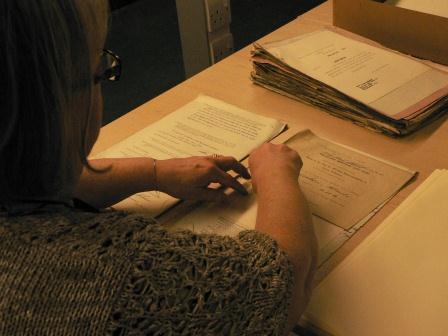 Volunteer at The National Archives

From 6-11 November, Ancestry is offering free access to the UK WWII Civilian Defence Gallantry Awards, 1940-1949 collection as well as more than 200 million other military records at www.ancestry.co.uk/remembrance.