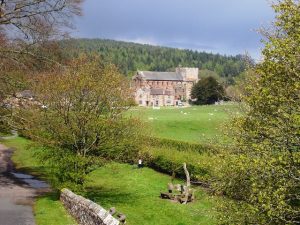 I recently enjoyed a weekend away with some friends in Carlisle, in the north-west of England. One of the places that we visited was Lanercost Priory, about 13 miles (21 km) east of the city. Once an important medieval religious community, the priory was dissolved under King Henry VIII. Part of the building has been restored for use as a parish church and the ruins of the rest are preserved by English Heritage as a historic monument. 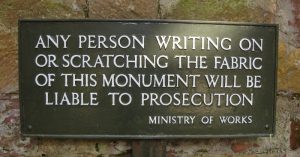 I was particularly struck by a sign on one of the walls warning visitors not to write on or scratch the stonework. The Ministry of Works, which put up the sign, was a government department that used to be responsible for both modern government buildings and historic buildings in the government’s care 1.

Knowing that we hold Ministry of Works records at The National Archives, I wondered whether we held any records about minor vandalism at the Lanercost site. When I was back at work, I decided to find out, and I soon discovered that we do hold a file about exactly the kind of activity forbidden by the sign.

This file (document reference TS 59/180) comes not from Ministry of Works records but from the records of the Treasury Solicitor 2. In January 1950, two men were prosecuted for carving their names into one of the stone walls. There was some doubt about whether or not this counted as causing damage to an ‘ancient monument’ and the Treasury Solicitor was asked for a legal opinion. As the affected wall belonged to the restored parish church, it was determined not to be part of an ancient monument, which meant that the offence was less serious. The two vandals were each fined 10 shillings (50 pence in today’s money) at the local magistrates’ court, plus a pound to pay for repairs and another pound to cover court costs.
I found this file by searching our new Discovery catalogue. I started by searching for Lanercost NEAR (priory OR monastery) and scrolling through the results. Alternatively, I could have searched for Lanercost on its own, and then refined my results by date, by the government department where the records came from, or by subject category. For instance, if I was particularly interested in finding plans or maps, I could tick the box for the subject category ‘maps and plans’.

Of course, I’ve only tried a couple of quick searches, and not all of my search results turned out to be relevant or of interest to me personally. As some of the descriptions in the Discovery catalogue are much more detailed than others, I’m sure that I haven’t identified all the records at The National Archives that relate to Lanercost Priory either. In fact, although I’ve made quite a good start, I’ve probably only scratched the surface 3.

What next? If you’re interested in finding out about the history of a place, you can:

Search our Discovery catalogue to find records held at The National Archives, or use one of our search tools for finding records in other archives

Try our new, experimental Collections on a map feature

Elsewhere on the web: