Set cookie preferences
Home > Blog > Schoolboys in uniform – or not

Schoolboys in uniform – or not 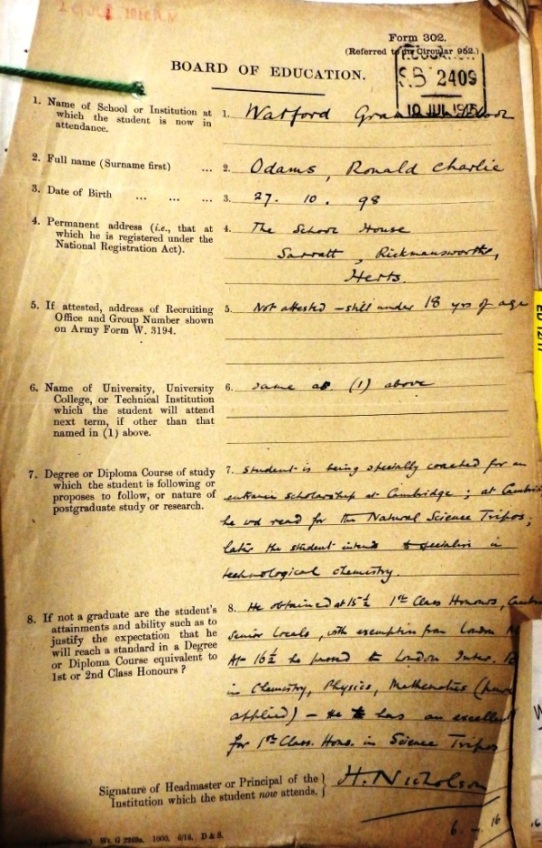 As we mark the centenary of the outbreak of the First World War there is a lot of interest in military records. This is hardly surprising, given the vast numbers of men who joined the armed forces, either as volunteers or, from 1916 onwards, as conscripts. Every family and every community was affected by the war, and there are war memorials all around the country, including many in workplaces and schools.

But the men in uniform were by no means the only ones who contributed to the war effort. Some were too old, too young or simply unfit for military service, while others worked in occupations that were deemed to be of national importance and were therefore exempt from military service. When the supply of volunteers no longer produced enough recruits for the forces, conscription was introduced in 1916. The lower age limit was 18, and while most young men would be working by that age, some were still at school, often hoping to proceed to higher education. Most pupils attended elementary schools up to the school leaving age of 14, but many towns had grammar schools and there were of course fee-paying schools which educated pupils up to 18, and boys in the sixth forms of these schools were old enough to be called up.

A network of tribunals handled the appeals of men who asked to be excused military service, but the Board of Education also had authority to grant exemptions to some school pupils. These were for boys studying science or engineering, and who, it could be argued, would make a greater contribution to the war effort by pursuing their studies and going on to work in the development of munitions or weaponry. Some correspondence survives on indvidual cases, including standard application forms, in record series ED 12 Secondary Education – general files.

Ronald Charles Odams, a pupil at Watford Grammar School for boys, was one such case. His application ‘Form 302’ gives details of his educational attainment so far, and his intended course of study at a university or college. To be considered for an exemption, a boy was expected to be capable of attaining First or Second-class Honours at degree or diploma level. Ronald’s application stated that:

‘Student is being specially coached for an entrance scholarship at Cambridge; at Cambridge he would read for the National Science Tripos; later the student intends to specialise in technological chemistry’

His application was successful, and he was included in the list of men ‘not to be called up without reference to the War Office’. This was not an absolute exemption, and was conditional on the man continuing to follow the course of study as described on the form. The War Office also  retained the right to withdraw such exemptions as circumstances required. Some school pupils who were granted exemptions were later called up, but there is no record of Ronald Odams serving in any of the armed forces. He did, however, evidently complete his studies and pursue a career in the chemical industry. His unusual surname means that he is easy to find in indexed records, and he appears twice in the outgoing passenger lists bound for New York, first in 1932 and again in September 1939. These lists give his name, age, address and occupation, but the records at the New York end of the voyage are much more informative. They are held by the National Archives and Records Administration in Washington DC, and the 1932 list provides the additional helpful detail that his employers were Imperial Chemical Industries (ICI), who paid for his passage.

Other pupils who were initially granted exemptions by the Board of Education were lated called up for service, and the files reflect this too. Alec Hanbrey Swann, a pupil at Horsham Grammar School (also called Colliers School) was also granted an exemption in 1916. He was about to embark on a City and Guilds engineering course, then a diploma course and finally a BSc at the University of London. but in the following year his exemption was withdrawn and he was called up, and served as a wireless operator in the Royal Flying Corps. This is detailed in a long letter from his father, who is at pains to point out that he does not object to his son serving in the forces, and requests that he be given a more suitable role, that is, he asked how he should set about obtaining a commission for his son:

‘It is surely not to the national interest that a promising youth should be doing work which militates against his future career when there are posts to be filled which would be more in keeping with the training that the youth has had.’

This did not impress the Board of Education, and his long letter received a  short reply:

‘In reply to your letter of June 3th, Mr Fisher desires me to explain that under the King’s Regulations attempts to obtain favourable consideration of any application by the use of outside influence is forbidden. He is afraid, therefore, that any intervention on his part might have the effect instead of prejudicing  instead of furthering your son’s case’

Alec Swann survived the war and resumed his career in engineering,  turning his skills in a distinctly un-warlike direction. Performing a Google search cannot be described as carefully-directed research, but with a name as distinctive as Alec Hanbrey Swann it is hard to resist; it revealed that he was the holder of two patents for improvements to cosmetic powder cases!

These are just two cases found in ED 12/17-19, which include items relating to a number of schools. Most, though not all, relate to applications from pupils like Ronald Odams and Alec Swann. An example of a different document altogether is a printed Roll of Honour from the Wyggeston Grammar School for Boys, Leicester, listing pupils and staff who served, with details of casualties and gallantry awards in ED 12/18. The catalogue descriptions for these three files ED 12/17, ED 12/18 and ED 12/19 have been tagged with the names of all the schools which are mentioned in them.

I have only recently begun to look at Board of Education records, but even from my limited searches it is clear that there is a lot of very interesting material about schools, pupils and teachers, and their role in the First World War.