No other monarch has, arguably, had a bigger impact on the thrones of Europe than Queen Victoria. With her consort Prince Albert she had nine children – four princes and five Princesses – of which eight would sit on thrones across Europe. Victoria married her children into royal houses from Greece, Norway, Prussia, Romania, Russia, Spain and Sweden. On her death in 1901 she left four future sovereigns of the United Kingdom: Edward VII, George V, Edward VIII and George VI. The German Emperor Wilhelm II was grandson to Victoria and Albert; his mother was Victoria’s oldest child, the Princess Royal, Victoria. The Duke of Connaught, Prince Arthur, renounced his claim to the throne of Saxe-Coburg and Gotha to later become the Governor General of Canada in 1911. 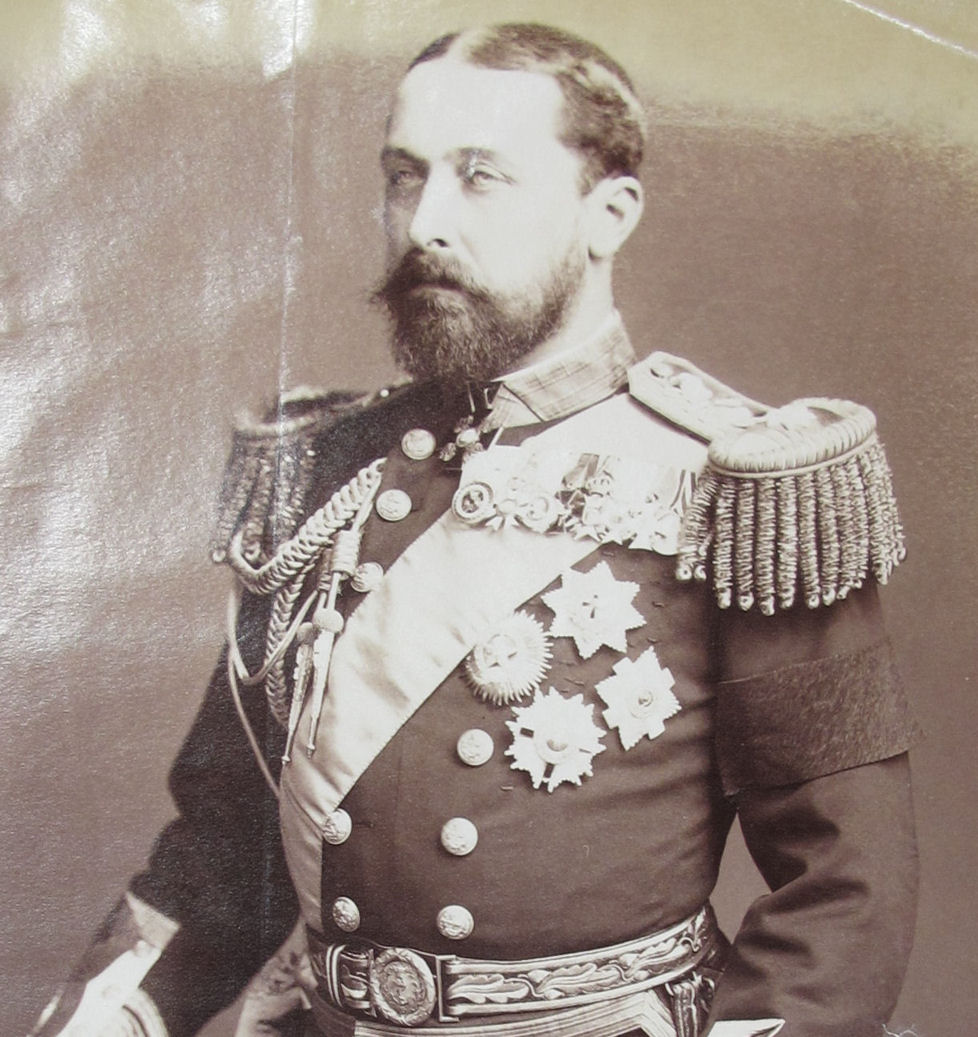 The Royal Navy and touring the Southern Hemisphere

Prince Alfred was the second son of Queen Victoria and Prince Albert, born at Windsor Castle on 6 August 1844. He was second heir to the throne of Great Britain and the Empire. More reserved than his older brother, cultured and intelligent, Alfred made a career and life away from the expectation of being the next in line to the throne.

His older brother – and heir to the throne – Edward, Prince of Wales, was more of a playboy character, touring, holidaying and playing around Europe. Queen Victoria hoped to calm the young Prince of Wales’ lifestyle. In response to continued requests from the Canadian Government for a royal visit, Edward was sent on a tour in 1860. The tour to Canada extended to the United States of America. No member of the royal family had visited North America since independence. During the visit to Washington, the Prince of Wales met with the newly-elected President Abraham Lincoln. Mary Lincoln named a wing after the Prince during refurbishments of the White House the following year. 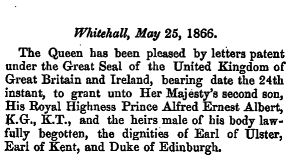 Prince Alfred was a different character, joining the navy at the age of 14. In 1867 he was promoted to Captain, and given command of his own Frigate, HMS Galatea. The Prince’s appointment as Captain of HMS Galatea started a world tour. After a visit to Australia, the Prince visited India, Ceylon, and Hong Kong; he was the first Royal to visit these territories. During his naval career he held the positions of Commander in Chief, Home Fleet, Mediterranean Fleet, and Plymouth; he was eventually promoted to Admiral of the Fleet in 1893, a position he held for only a few months.

As a Captain, and Duke of Edinburgh, Earl of Ulster and Kent, he travelled the southern hemisphere, visiting South Africa, Australia and New Zealand. During the Duke’s visit to South Africa in 1865, he inspected the 99th (Lanarkshire) Regiment of Foot. The regiment had previously been station in Hong Kong. His interest in the regiment resulted in Queen Victoria sanctioning the renaming of the regiment in 1874 to the 99th Duke of Edinburgh’s (Lanarkshire) Regiment of Foot. Later, from 1878, the regiment fought in the Zulu wars.

The Duke was the first Royal to visit Australia, greeted warmly and enthusiastically during a five-month tour of the country. But not everyone was so pleased to see him. On the 12 March 1868 during his second visit to Sydney, an assassination attempt threatened the life of the Prince. Henry O’Farrell shot the Prince in the back, just missing his spine. O’Farrell was convicted of attempted murder and hanged on 21 April 1868. An address by the colonists of South Australia to Her Majesty the Queen conveying condolences at the attempt on the Prince’s life was signed by over 63,500 people, and was 668 feet in length.

Following his tour of East Asia, various places were named after the Duke. Hospitals in Sydney and Melbourne were dedicated to the Duke’s recovery; a settlement in Tristan da Cunha was named following a visit during 1867, and buildings and townships were named to honour the Duke. A Russian armoured cruiser was also named after him.

Following the abdication of King Otto I in 1862, it was suggested that Prince Alfred take the throne of Greece. Although he was a popular choice with the Greek population, under the terms of the London Conference of 1832 the ruling families of the Great Powers (Britain, France, and Russia) were prohibited from ascending the Greek throne. Queen Victoria was also against the succession: she planned for Prince Alfred to succeed as Duke of Saxe-Coburg and Gotha.

Queen Victoria’s Warrant and Seal for the marriage of Duke of Edinburgh.
Catalogue ref: HO 124/16

In 1874 His Royal Highness Alfred Ernest, Duke of Edinburgh, Earl of Kent and Ulster, Duke of Saxony, Prince of Coburg and Gotha, married Her Imperial Highness the Grand Duchess Marie Alexandrovna, daughter of Emperor Alexander II of Russia. The Emperor granted the Duchess a large dowry and an annual income. The couple resided at Clarence House, London and Eastwell Park, near Ashford, Kent. They remained residents of these stately homes until 1893, frequently visited by Queen Victoria and other family members.

The Duke succeeded the throne of the duchy of Saxe-Coburg and Gotha on the death of his uncle, Ernst, in 1893. The Duke’s two brothers, Prince of Wales and Duke of Connaught, both resinded their claim to the throne. The Duke resigned from the Privy Council, House of Lords, and his new role as Admiral of the Royal Navy. He moved the Duchess and their five children to the Duchy.

The Duke of Edinburgh, Earl of Kent and Ulster, Duke of Saxe-Coburg and Gotha died of throat cancer on 30 July 1900. He is buried in the ducal family mausoleum in Coburg. The son of his late brother, Leopold, Prince Charles Edward, Duke of Albany, succeeded the throne.